Greenlight > Games > Half-Rats's Workshop
Greenlight is being retired. For more information on how to submit games to steam, refer to this blog post.
This item has been removed from the community because it violates Steam Community & Content Guidelines. It is only visible to you. If you believe your item has been removed by mistake, please contact Steam Support.
This item is incompatible with Greenlight. Please see the instructions page for reasons why this item might not work within Greenlight.
Current visibility: Hidden
This item will only be visible to you, admins, and anyone marked as a creator.
Current visibility: Friends-only
This item will only be visible in searches to you, your friends, and admins.
Half-Rats: Parasomnia (FREE Half-Life Mod)
Description Discussions0 Announcements4 Comments50 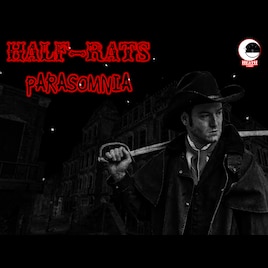 Shepard
Offline
See all 12 collections (some may be hidden)
Recent Announcements View All (4)
New Gameplay Video Up!
May 4, 2017 - Half-Rats

Valve Video Archive hosts a livestream of Heath Games' coder, Shepard, showcasing some of the levels and features in Half-Rats: Parasomnia. It had a great turnout - and thanks once again for your support, everyone!

This one's a lot better, and should show you just a bit more of what we're packin'.

Read More
Description
Release date: Quarter Four 2017 - Halloween
HL1 Required to play! It's Free, which means you won't be paying for it. And in case you didn't understand that you're getting hours of total conversion, original content for no charge - we mean to say that you needn't purchase it. Costs Nothing. Zilch. This is a labor of love.

- 24 brand new maps. Featuring several environments.
- Story-Driven Gameplay.
- Semi-Open World - that encourages exploration.
- Replay: After you beat the game, "NEWGAME+" is available, which allows you to replay with new gamemodes.
- Inventory items you can carry with you and use. Each with its own effects. you can carry up to 9 of each item.
- Get drunk, get high on Cocaine, and kick some ass! Victorian style!
- Lantern that requires oil to function.
- Monetary system. You can pick up cash and valuable objects in order to purchase items at stores.
- Brand-new enemies to contend with - Many with their own abilities and fighting styles.
- Mixed enemies that each utilize their abilities in a squad setting to take you down.
- 5 new period weapons; some with alternate fire modes.
- "Kicking" enemies and "Blocking" attacks during melee combat.
- "Half-Cat Cheroots" combat companion.
- Over 700 brand-new textures from scratch.
- New sounds!
- New music provided by "Ague". www.facebook.com/agueforyou

July, 1883. Half-Rats is, as he usually seems to be; down on his luck and fretting for the future. One fateful night, he carelessly decides to drown his sorrows with strong libations - and he runs up a tab at a pub he knows he can't pay...Remarkably; Instead of a reproachful speech and coarse removal, he is instead told a tale he can hardly believe. A tale involving great riches, but even greater peril. If he was not so desperate, he wouldn't conceive of embarking on what could be a wild goose chase to locate a forgotten and virtually unknown town. Half-Rats' doubts were abated somewhat when the publican shews his utmost sincerity - albeit in a strange and effusive manner - and draws him a rude map.

"Thank the lord, for he smote that place from the Earth in '81. We lived, but most met their destruction the night that liberating conflagration visited freedom upon us. We're the last of 'em...There was a vault in the bank, large sums of money would have been stole away there, safe. We vowed never to go back, to keep that place a dread secret until tonight."

The seemingly mythical town in question is referred to as "Eminence". With no other hope to speak of, and fearing that this may be treachery after all; Half-Rats is still compelled to begin this peregrination to his "El Dorado" with weapons at the ready. But he'll find much more than gold and banknotes before his journey is through. All is not what it seems, and he'll find a living, livid hell to contend with...And the close of a dilemma he'd all but forgotten.

Half-Rats – A somewhat educated gentleman who fell from grace long ago, but still retains a singular social fluidity and still holds fast to the moral compass of his upbringing, and has been known to rub shoulders with bad company, while also fraternizing with the upper class when he can – where some regard his kinship as a novelty at times. Likes his whiskey. He has a certain amount of mettle, and tends to show levity as a means of dealing with dire situations. He had heard the rumors of Eminence back in Detroit, and decided to embark on an adventure!


Powered by the Goldsource engine!

Max Vice May 4, 2017 @ 4:37am
Excited due to interest of goldsec gameplay,and it's free,its also voiced and its trailer is perfect.

celery man May 3, 2017 @ 4:22pm
Haven't been this excited for the release of well.. anything recently. Pretty great how a half-life mod is what im most excited for haha