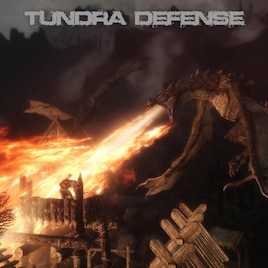 Danny
Offline
See all 287 collections (some may be hidden)

This item has been added to your Subscriptions. Some games will require you to relaunch them before the item will be downloaded.
Description
The maker of Wasteland Defense brings you:
TUNDRA DEFENSE

This mod REQUIRES SKSE, which you can download here[skse.silverlock.org]
For help installing SKSE, please watch this video.

If you are having trouble where the button presses are not being recognized (you can't finalize an object), you have NOT installed SKSE properly.

Changelog
-Updated farm plots. You now can plant seeds or burn the soil. Planting a seed will yield a plant after some time. Burning the soil will cancel any current plant growth. This manual form of farming is to prevent the crashes and lag that occurred due to automatic farming.

To move to the new system, you will have to remove all current farm plots, open the console and type:
ReloadScript aaaFortFarmPlotScript
Then save/reload and you should be able to activate farm plots.

If you experience any issues that you have narrowed down to this mod (the crash occurs with every other mod turned off), please give me feedback on what happened at the time of the crash.

DESCRIPTION
Skyrim is a dangerous place these days. With the harsh weather, the civil war, and the coming of the dragons, the Dragonborn needs to have a place to call home and strategize. Construct your own outpost, build up its defenses, and prove your worth to the rest of the world by defending it from raiders and dragons.

INSTALLATION
This mod REQUIRES SKSE, which can be found here[skse.silverlock.org].
--
Extract the zip file into your data folder (the path should be similar to C:\Program Files\Steam\steamapps\common\skyrim\Data)
It is suggested you use the Nexus Mod Manager to manage your mods. Enable the mod and load up your game. Within a few seconds a quest update should pop up and give you directions.

FEATURES
-Outpost Construction System: Acquire plans and use them to place objects within your fort. Objects can be placed in any manner you desire.
-Guard System: Recruit guards to patrol your fort, defending it from enemy invaders. Need to defend a secure location? Hire a stationary guard who will hold his ground until his dying breath.
-Plan Market System: Allow a outpost merchant to set up shop and offer various plans for necessities/defenses. The market's stock changes day by day, and special plans may become available.
-Raid System: A remote activated system that can trigger a raid across three difficulties. Supplies are scavenged after fending off a raid, which can be used for future upgrades and defenses.
-Random Raid System: Raider attacks will be randomized, coming when you least expect it (toggle-able in user options)
-Scavenger System: Recruit scavengers to pick across the remnants of your enemies and salvage their equipment.
-Citizens: Let people move in to your outpost and receive a daily tax income from them.

OTHER NOTES
This mod is very much a WIP still, so you may come across bugs or features that aren't fully implemented. However I ask that if you do find something of note, please leave a comment so I can look into your issue and hopefully solve it fast.

I will be updating this fairly frequently, so keep an eye on this page for any news on new versions.


FREQUENTLY ASKED QUESTIONS
Q. My button presses aren't registering! I hold the ' (apostrophe) menu down and no player menu shows up, or I can't finalize object placement. What's wrong?
A. You need to install the latest SKSE, scripts included.

Q. My game has intense freezing, sometimes from 10-20 seconds. What's wrong?
A. This is related to another mod you have installed that has a script error. This is unrelated to Tundra Defense, but becomes apparent due to the fact that Tundra Defense access the script engine frequently. If you have a mod such as Warzones installed, this is generally the source of the bloat. Check your save game size and make sure it is no larger than 30 megabytes MAX.

Q. My stationary guards are falling through objects! What can I do?
A. In the later versions of the mod, a new system was set in place so that they reset after 30 seconds when not in combat. You can manually verify that they reset by speaking to the guard.

Q. My NPCs are getting stuck on meshes. Why?
A. At the current time, it is impossible to dynamically generate a navmesh. So any player spawned content isn't actually seen by the AI in the game. Consider making clear paths between patrol points.
Popular Discussions View All (6)

austintexas2456 Jul 17 @ 7:24pm
This is for everyone, place any tundra defense related objects in the world. I can select objects from my inventory but the marker to place them will not appear, I first noticed this when trying to place stationary guards out of the boundary markers... anybody know if there are any mods known to conflict? (i did accidentally sell the rebind keys sheet so that may be it as well)

UltraEmailMan Jan 4 @ 5:26pm
I like that the mod is about building a new amazing outpost, yet almost all of the pictures are of a settlement being burned to the ground by dragons. lol.

Danny  [author] Aug 9, 2019 @ 8:07pm
@BaronSkilith This mod does not affect anything related to sound / music being played. As unlikely as it sounds, the issue is probably due to another mod having an issue that is only surfaced when in the presence of your 'town' (due to the amount of script pool resources that are being used). Can you verify that this is still a problem if you leave the area, save your game, disable all other mods, and re-enable Tundra Defense?

BaronSkilith Aug 8, 2019 @ 7:18am
Quick issue with this mod. Once you reload a save and come back in at your 'town', the game begins playing music over itself. I think it's doing a town theme as well as just the natural exploring soundtrack. It's related to this mod for sure, as once I disabled the mod, the sound fixed itself.

Ulvrik Jul 2, 2019 @ 6:18pm
I'm curious as to how I can force Stationiary guards to wear a specific piece of armor

Perhirmor May 27, 2019 @ 2:42pm
"Hey dude, great mod, one of the best made with sure! but im having problems with the player menu, currently apostrophe is assigned to the console and i can't open the menu, I tried to change the key in that book but it designates instantly te apostrophe again without i click anything, yes I checked and i'm running SKSE correctly. HELP ME PLS I WANNA PLAY THIS MOD!" `Fire Destroyer
I have the same problem.

Fire Destroyer May 17, 2019 @ 7:39pm
Hey dude, great mod, one of the best made with sure! but im having problems with the player menu, currently apostrophe is assigned to the console and i can't open the menu, I tried to change the key in that book but it designates instantly te apostrophe again without i click anything, yes I checked and i'm running SKSE correctly. HELP ME PLS I WANNA PLAY THIS MOD!

Timesplitter Nov 23, 2018 @ 11:20pm
TESV: Skyrim: God Amongst All Edition 11/23/2018 has just been released. Thank you for your amazing mod that contributed greatly to making this mod collection what it is today. Newly included in this collection are the Unofficial Skyrim Patches making this game run as stable and smooth as Skyrim Special Edition. Thank you again for your amazing addition to the collection. Check it out at https://steamcommunity.com/sharedfiles/filedetails/comments/106745968 . Your one arrow to the knee that's left, Timesplitter.