Greenlight > Games > World Slayer Team's Workshop
Greenlight is being retired. For more information on how to submit games to steam, refer to this blog post.
This item has been removed from the community because it violates Steam Community & Content Guidelines. It is only visible to you. If you believe your item has been removed by mistake, please contact Steam Support.
This item is incompatible with Greenlight. Please see the instructions page for reasons why this item might not work within Greenlight.
Current visibility: Hidden
This item will only be visible to you, admins, and anyone marked as a creator.
Current visibility: Friends-only
This item will only be visible in searches to you, your friends, and admins.
World Slayer
Description Discussions0 Announcements1 Comments58 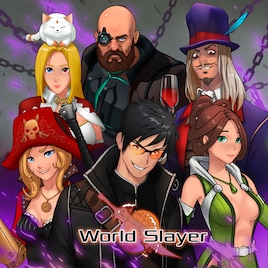 Thank you for your support, together we made this possible: World Slayer has successfully passed the greenlight!

Read More
Description
Release date: Winter 2017
World Slayer is a nonlinear RPG that gives players an extensive freedom of choice. Be a savior or a villain, a romantic hero, a criminal, or just play as a passerby in the sandbox world full of unique characters, conflicting factions and diverse locations.
World Slayer is designed to bring full role playing experience to PC and mobile platforms, with proper nonlinearity and high replay value.

World Slayer is an RPG that uses both Western (Dragon Age, Baldur’s Gate) and Eastern (Persona, Final Fantasy, Suikoden) RPG elements, developed for mobile platforms, handheld consoles and PC. We want to make the game as accessible as possible for all types of gamers. You’ll be able to play World Slayer practically anywhere and anytime! Freedom - the game is full of it! We want World Slayer to give players a new, previously unexplored gaming experience.

Many modern RPGs miss the core thing - the roleplay! Usually the players are fed a mere illusion of roleplay, and have to do a lot of grinding through the same dull plot of saving the world. Enough of that, we say! What’s up with that obsession of saving the world anyway?.. Sure, feel free to save it, if you like, but that’s only one of many paths. It’s rather rare for a game to let you, the player, make your story.

- Completely nonlinear single player campaign, where the destiny of the world depends solely on player’s decisions. Cause and effect relationships are very important. Restore your powers, destroy the world. Or rule as its Emperor. Or save it. Or - the heck with the world! - find yourself the love of your life, and spend the rest of the time with that person… before the world ends, of course.

- The relationships between the protagonist and main companions could vary from a friendship or a common romance… to a global catastrophe. Yeah. The one you’ve dumped can become your nemesis one day.

- At a certain point the Faction Rivalry mode (strategic good old Sengoku-like addon) becomes available, allowing the player to conquer cities and lands like a strategist, improve the army and build defences. That’s not a required gameplay element, you can just do that, if you like. Have fun destroying whole kingdoms.

- Crafting weapons, devices, and magic stones. Sure, if you can forge your story, it wouldn’t be fair to not let you forge your sword.

- Battle system, that looks deceptively simple, offers a large variety of tactics with a buff algorithm that actually matters (yeah, for once). And grind is not a must ;)

- Every battle action requires a minimum of a stat to perform. Make your enemies weak so that they won’t be able to raise their weapons at you and use magic, devices, potions or whatever else to unlock moves that are beyond your level. Every enemy has a weakness and a way to be defeated. Find it. And get the scoundrel down.

- Replayability - every new playthrough could be a completely new story, different from the previous one. Also, finishing the game once unlocks the New Game+ mode, which allows to affect the story in new ways and discover elements that were initially unavailable.

- Ease of use - it’s simple to understand how the game works and how to get a hang of its features. Further in the game the player is presented with options of combining and improving these features in order to find the player’s unique tricks to level up and complete global actions.

- Story - the narrative isn’t built on trivial claims about saving the world and cutout “chosen one” templates, instead it’s based on characters’ interactions and non-standard storytelling decisions, which the player has to deal with. The story is presented somewhat frivolously, with humor and a bit of parody.
< >
58 Comments

emyshinifan May 12, 2017 @ 11:43am
can't wait to try the demo will update what I think as soon as i've tried it. so far, it seems to have some unique ideas and huge potential to be one of the better indie games out there.

Jan May 9, 2017 @ 1:54pm
Oh, I like the up beat nature of this game. It kinda feels like fast paced turn-based game which is very rare. I like the colorful characters.