Greenlight > Games > conradproteus's Workshop
Greenlight is being retired. For more information on how to submit games to steam, refer to this blog post.
This item has been removed from the community because it violates Steam Community & Content Guidelines. It is only visible to you. If you believe your item has been removed by mistake, please contact Steam Support.
This item is incompatible with Greenlight. Please see the instructions page for reasons why this item might not work within Greenlight.
Current visibility: Hidden
This item will only be visible to you, admins, and anyone marked as a creator.
Current visibility: Friends-only
This item will only be visible in searches to you, your friends, and admins.
TAURONOS
Description Discussions0 Announcements6 Comments119 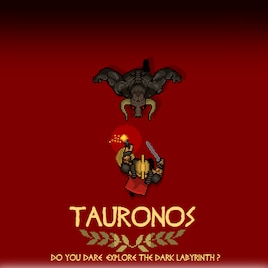 conradproteus
Offline
See all 3 collections (some may be hidden)

View TAURONOS in the store

Hey guys & girls
We got the greenlit Thank you so much !!!!!!!! We will not disapoint !
We started a game development log on youtube , for people who want to see how game gets created.
https://www.youtube.com/watch?v=J8x9kQJIl4o

Read More
Description
Release date: Summer of 2017
TAURONOS is a game about exploring a dark labyrinth, praying to the gods for favors and avoiding traps, all while the ferocious Minotaur chases after you. Physically, you’re exploring the labyrinth, avoiding traps, solving puzzles, evolving the game avatar, while the minotaur is always getting closer.

Philosophically, you’re re-enacting the fight with the inner animal, through story and overcoming of psychological limits.

Inspired by the greek myth of Theseus and the Minotaur, but you’re mainly playing your own story (bonding with the game avatar). Unique elements :
- One enemy - invincible until the character evolves enough to face it
- The only currency for upgrades is time, time in which the beast gets closer

Support:
If you are interested in our game or want to support the development, you can subscribe for news & testing at:
{LINK REMOVED}www.16bitnights.com conradproteus  [author] Jul 18, 2017 @ 2:37pm
Thank you guys, we now made coming soon page, we will release TAURONOS in 28-29 July, meantime if any of you have any questions we made a discord room https://discord.gg/rgTUCYT

@johan - i dunno, maybe horror is the new black

@RJHunger - thank you / we will add the blueprint at some point

Drop us a subscribe on www.16bitnights.com for news about release !

TAURONOS has been Greenlit and is now listed in the Steam store. For the latest information, purchase options, and discussions for TAURONOS, please see it on the Steam Store or in the Steam Community.
Visit Store Page
For more details Visit Community Hub
For latest discussions
If you really, really want to, you can continue to the Greenlight page. Information on this page may be out of date, since all the action has moved to the areas noted above.