Store Page
Medieval Engineers>  Workshop > STORI3D PAST Productions's Workshop
This item has been removed from the community because it violates Steam Community & Content Guidelines. It is only visible to you. If you believe your item has been removed by mistake, please contact Steam Support.
This item is incompatible with Medieval Engineers. Please see the instructions page for reasons why this item might not work within Medieval Engineers.
Current visibility: Hidden
This item will only be visible to you, admins, and anyone marked as a creator.
Current visibility: Friends-only
This item will only be visible in searches to you, your friends, and admins. 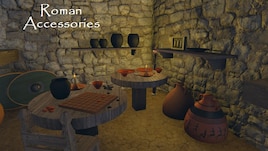 This item has been added to your Subscriptions. Some games will require you to relaunch them before the item will be downloaded.
In 1 collection by STORI3D PAST Productions
Roman Engineers

5 items
Description
Roman kitchen and housewares to help add some Classical flavor to your worlds.

This mod is a personal project for fleshing out my Roman forts. But hopefully you will find things to like & use in here too. It is a set of 12 various Roman-era accessories:

All of these items (except the painted amphora, which is just TOO good not to include in the mod) are well known on Hadrian's Wall. The amphorae would have stored oils & sauces. (They were often recycled afterward to be used as urinals in barracks, buried in the ground!) Samian ware was imported from Gaul (France) & was the nicer regular pottery used for eating. Black-burnished ware was made down in southwest Britain; the army on Hadrian's Wall had a 200-year-long contract for it. The gameboard is for a game known as "Latrunculi." Its rules aren't known, but it was probably a cross between checkers & chess. Every Roman household had a mortarium, it's a true classic. The "Cucullati" are known all over the northwest Roman Empire, and keeping carved "household gods" was a Roman tradtiion. And every soldier needed his own skillet for cooking. Little pottery oil lamps were extremely cheap & common. Candles were known, but a wick in oil seems to have been the usual Roman way of lighting one's way at night.

I hope that the designs add good value to your builds. As always now, all of these have LODs in place so the resolution will go down as you go farther away. This saves -bigtime- on computer processing & will keep the game optimized. They also are all buildable in Survival mode.

Enjoy! And thanks as always for your support.

If you like what I create & would like to help or donate, please visit my Patreon page. You can become a backer for only $1 a month. https://www.patreon.com/stori3D_past

Gx1|Dolobarsch Jun 7, 2017 @ 10:08am
Nice and cool Roman stuff but I´d like to ser germanic war wapones and viking shields XD

STORI3D PAST Productions  [author] Apr 2, 2017 @ 6:06am
Hey Speedy Builder, thanks! Yeah that was a fun one. It's actually usable too as a chessboard. Tricky to move the little pieces dynamically but it can be done. :)