Greenlight > Games > Interactales's Workshop
Greenlight is being retired. For more information on how to submit games to steam, refer to this blog post.
This item has been removed from the community because it violates Steam Community & Content Guidelines. It is only visible to you. If you believe your item has been removed by mistake, please contact Steam Support.
This item is incompatible with Greenlight. Please see the instructions page for reasons why this item might not work within Greenlight.
Current visibility: Hidden
This item will only be visible to you, admins, and anyone marked as a creator.
Current visibility: Friends-only
This item will only be visible in searches to you, your friends, and admins.
Zombie Society - Dead Detective
Description Discussions0 Comments70

Interactales
Offline
See all 5 collections (some may be hidden)
Description
Release date: September 2017
A point and click adventure with a unique "deaduction" system, set in a not-so-far future in which zombies have conquered the planet.
interrogate the suspects and witnesses, collect clues, combine them, and form the right (or wrong) deductions.
Solve four of the most bizarre mysteries you've ever seen! 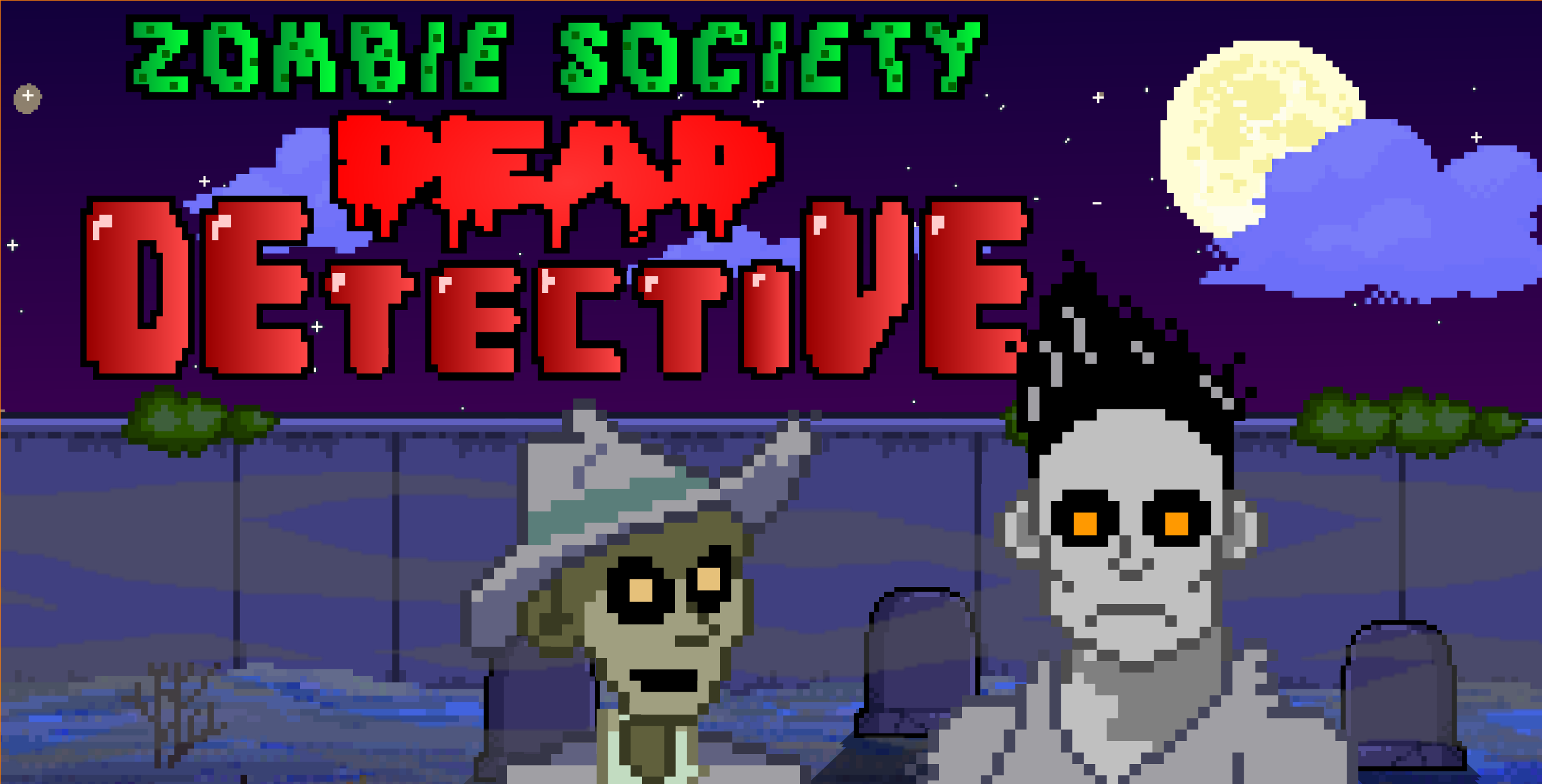 "Zombie Society - Dead Detective" is something more than just another point and clicker! 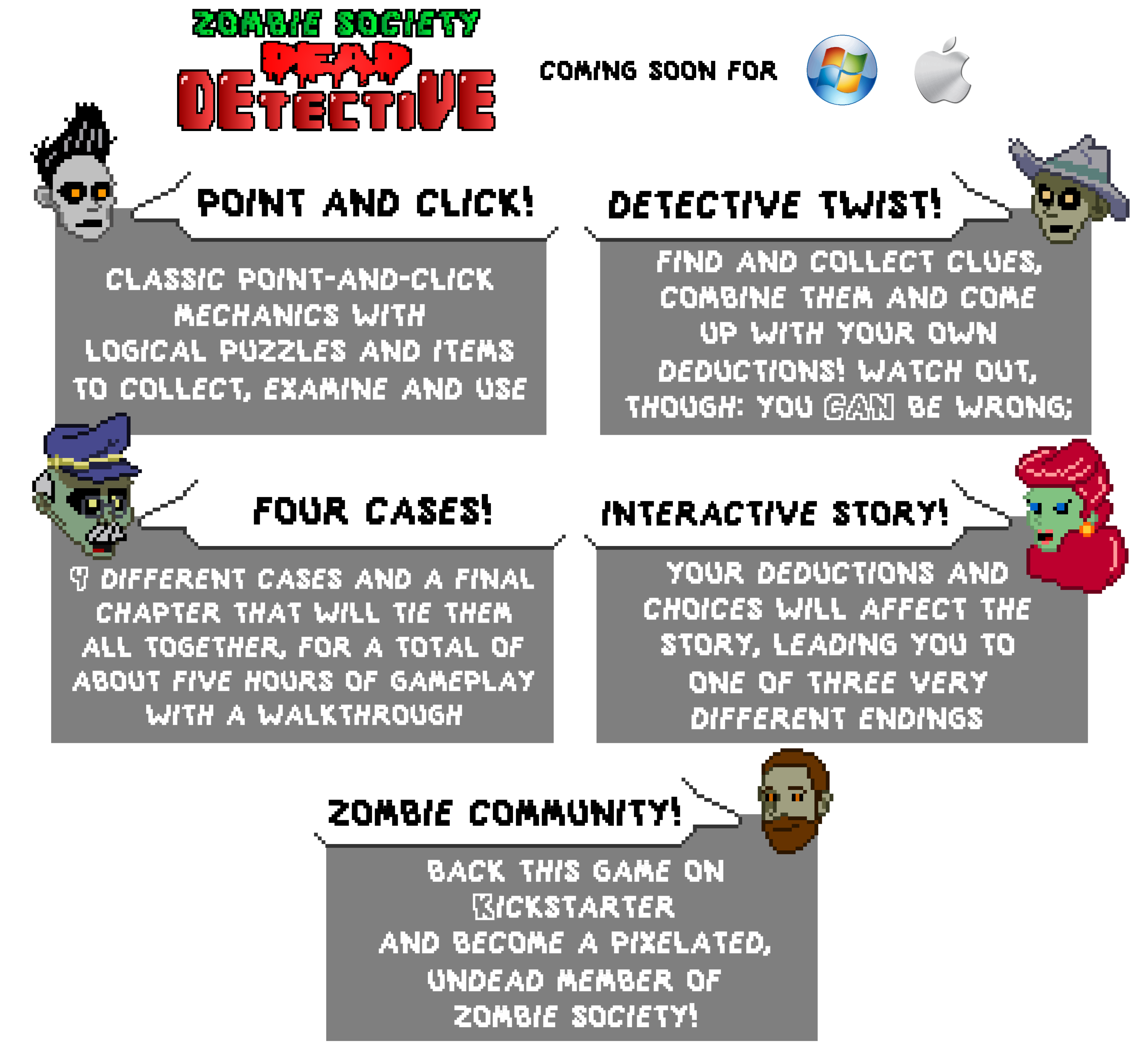 A demo of the game, which consists of the first case, is already available on the web for free and has been received with great enthusiasm by thousands of players

Zombies have conquered the planet. They even established their own society... Which, all in all, is just as dumb and nonsensical as ours.

And crime is as rampant as ever, but worry not: private detective Margh and his partner, Ghvnn, are on the case!

And what a collection of weird cases this is!
Someone's stealing other zombies' heads and limbs, but why? A wild, living brain's been spotted just outside of town... Where is he coming from? And what is the Zombino Family up to?

Margh will have his hands full, but you can help him out.
Just don't go accusing the wrong undead guys, okay?

My name is Francesco Dell'Anna Muia, and I'm the owner and founder of Interactales since 2015.

I'm in no way a "famous" developer, but I've been making web games for more than ten years, mostly on Newgrounds - where I go by the nickname of "Muja".

I'm a writer, game designer, programmer and occasionally an artist/animator.

And I'm the guy who wants to tell you this weird, funny tale.
Would you lend me your ears and eyes?
I'll give them back to you once I'm done, I promise.

And if you want to contact me, feel free to do so on my website or any of the social platforms below:

ThemePark Nov 29, 2019 @ 8:36am
The game has officially been cancelled, though I don't know why the author hasn't come out and said it here first, or at all. The statement can be seen here:
https://www.newgrounds.com/portal/view/742941

Interactales  [author] Jul 23, 2018 @ 5:07am
Hello Pimhazeveld, the publishing date has been delayed to the end of 2018 / early 2019.
You can follow all the news on the series (as well as infos on the new web games) on my Facebook and Twitter page (@interactales)

Mipha Jun 7, 2018 @ 1:51pm
So uhm. This was supposed to release in february right? Well, since its june right now. What happened? And why can't I find any info about the delay online?

Windblade Zero Feb 13, 2018 @ 2:44pm
that sounds great, also i know technically they are free but, look at it this way, it would be even better if one could have the "other" cases on the main game even if just for the convenience of having all the content in the same place :steam

I've been thinking about it ("why would people buy games that are already available for free?") and the answers I've come up with are these two:
1- they will be refined to look better, with better graphics and with all the old bugs fixed
2- flash support will be dropped by all broswers starting by 2019, so all those flash games on the web wouldn't be playable anyway

Thank you for the support!