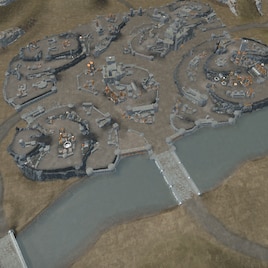 Girion
Offline
See all 21 collections (some may be hidden)

This item has been added to your Subscriptions. Some games will require you to relaunch them before the item will be downloaded.
Description
This map is made at maximum size and features a large Dwarven settlement.The city is build over several hills, each hill with several tiers. Larger roads between the hills and smaller roads further up. Outside the city there are ven more hills. There's also a major river crossed by 4 bridges.

This is a map that puts emphasis on high maneuverability units. Flyers will have easy access to the higher points of the map. Vanguards can hide in a forest to launch a surprise attack and fast units have many roads to outmaneuver and outflank the opponent. Good placement of artillery pieces is important, well placed range units can make a lot of impact. Elite units can play an important part, especially in the more narrow places that can only support one unit in width.

I have tried to make a map that is grand in scale and have much attention to the visuals, while also offering lots of tactical options. The city contains lot of mining activity, to give it more of a Dwarven feel. Also, since it is a Dwarven city, it contains lot of smaller paths up the hills, most of the smaller chokepoints will only allow for one unit in width (on ultra size). It offers lots of opportunity for defensive tactics.

The AI works, although it won't utilize most of the finer tactical options offered. I have told the defensive AI to take position at the town entrance, which is very defensible, rather than trying to execute some finer strategy.

While this map is made as a Siege were the defender have a big advantage there is also a field battle version of it:
http://steamcommunity.com/sharedfiles/filedetails/?id=894719859
Here the players starts on one side each of the city, and will have to fight for it.

There's a lot of attention to details (made sure all buildings have walls, no clipping etc. If you see any flaw, tell me and I will update.

Girion  [author] Apr 20, 2017 @ 11:58am
Just made revisions to all my maps. Nothing major but several details have been improved. I have added a few more AI hints, also the grass should look better on a few maps.

Also, a big thanks to everyone who is making comments in the comment section!
< >