Store Page
Train Simulator>  Workshop > DPSimulation's Workshop
This item has been removed from the community because it violates Steam Community & Content Guidelines. It is only visible to you. If you believe your item has been removed by mistake, please contact Steam Support.
This item is incompatible with Train Simulator. Please see the instructions page for reasons why this item might not work within Train Simulator.
Current visibility: Hidden
This item will only be visible to you, admins, and anyone marked as a creator.
Current visibility: Friends-only
This item will only be visible in searches to you, your friends, and admins. 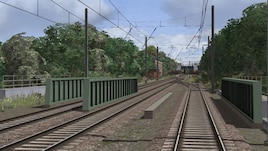 This item has been added to your Subscriptions. Some games will require you to relaunch them before the item will be downloaded.
In 1 collection by DPSimulation
DPSimulation - Route Collection

4 items
Description
This route provides an extension to the ECML: London to Peterborough route and adds additional track and scenery to Letchworth Garden City and Royston, along with the EMU sidings at Letchworth and the new flyover at Hitchin.

This extension was done after a request from a friend to include Letchworth Garden City on the ECML route so I initially decided to have a crack at that part.

After subscribing and allowing installation of the route via the Steam Workshop, the route will be listed under Quick Drive as '[DPS] East Coast Mainline - South'. A very basic quick drive has been provided with fast line paths to and from the new stations. Initially the grand plan was to add the new paths to a clone of the original ECML quick drive, but doing so (rightly) fails the workshop validation process. If the route doesn't show up after installation, all I can suggest is to unsubscribe and re-subscribe to the route, I have no control over how the route installs on to your system.

DPSimulation  [author] Jan 18 @ 4:02am
It seems the workshop can be a bit quirky at times. Won't it let you use the route even if you ignore those claims?

DPSimulation  [author] Jan 13 @ 5:18am
Subscribing is downloading, it should have downloaded in the Steam client.

Then load Train Simulator, click Drive and then the Workshop tab and it should start saying something like decompressing files. Once done the route will be available to use.

nigel.anthony Jan 12 @ 11:37am
This is entry level dummbarseness, but where do I fnd the actual downlaod link. I've subscribed but can't see where to downlaod the route.

DPSimulation  [author] Nov 1, 2020 @ 7:08am
I've just made it final so workshop scenarios will be allowed. It may take some time for the system to catch up though.

malcolm.crabbe Oct 31, 2020 @ 10:50am
I've only just back into playing this sim, but must have downloaded this extension to my ECML London to Peterborough route. I've created a scenario using this route rather than the DTG version but when I try and publish it reports the route has not been made final.... Any ideas ?