Greenlight > Games > JForthDesigns's Workshop
Greenlight is being retired. For more information on how to submit games to steam, refer to this blog post.
This item has been removed from the community because it violates Steam Community & Content Guidelines. It is only visible to you. If you believe your item has been removed by mistake, please contact Steam Support.
This item is incompatible with Greenlight. Please see the instructions page for reasons why this item might not work within Greenlight.
Current visibility: Hidden
This item will only be visible to you, admins, and anyone marked as a creator.
Current visibility: Friends-only
This item will only be visible in searches to you, your friends, and admins.
Medieval Steve
Description Discussions0 Announcements1 Comments146 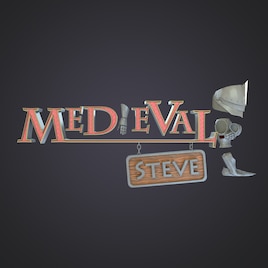 JForthDesigns
Last Online 27 hrs, 52 mins ago
See all 2 collections (some may be hidden)

View Medieval Steve in the store

After some great feedback from the initial Alpha testers, I have managed to get a good amount of things fixed and ready for the next batch to test.

Medieval Steve is a 3D Platformer, where you play as a pile of armour, held together by magic; that can stomp and smash, killing everything on screen! You job is to save the world from total destruction. You race through the levels, killing and collecting everything.

Steam Trading Cards will be available!

Marlin, a very powerful and wise wizard needed an apprentice; to help around the house. He used his powerful magic and created his apprentice from some old armor. At this moment, Steve was born. With no flesh or bones holding him together, Steve was impervious to pain and could regenerate, should the worst happen.

Marlin was experimenting with spells such as inter-dimensional portals and even time travel. However, even with his great wisdom, Marlin's experiments went horribly wrong. He had torn a huge hole in the fabric of space and the worlds we know and love, crumbled and broke into thousands of shards. As Steve was not part of the mortal realm, he was not affected by Marlin's spell and the fate of the world rested on his shoulders.

With the crumbling of the worlds, grotesque and hideous creatures were spawned out of evil, outer-world dimensions.

Along the way, Marlin was managing to send notes to Steve to give him hints and enable Steve with powers and abilities. Steve has to collect all of the broken shards of the worlds and fix everything before it was too late.

You play as Steve. Can you be the hero, the world needs?

Medieval Steve is a 3D side scrolling, puzzle platformer. It's akin to the games of old, but, with a modern twist. You must battle your way through various enemies, collect gems to progress and solve puzzles to find secret areas and power-ups.

The better you do in the game, the better rating you get at the end, which means more upgrade points, to improve Steve!

You play as Steve, the magical knight, who was created by a powerful wizard. Steve started life as a rusty old pile of armour, discarded and unwanted. However, Marlin - the powerful wizard - was in sore need of a helping hand, around his lab. He stumbled across this pile of junk metal and took it back home with him. With a Whizz, a POP and a Bang, Steve sprung into life!

Throughout the game, there a number of collectible items, that will help you along your journey.

Blue Gems
- these will help restore power to the broken worlds and allow Steve to travel between them.

Green Gems
- If you have lost any health from an enemy attack or a trap, this will restore a small percentage.

Hand Token
- Once collected, Steve can transform into just a hand....yeah, I know, it's weird, but, it helps you reach places you otherwise couldn't when you were full sized. Beware though, the effects only last a few seconds!

Secret items
- throughout the worlds are secret artifacts that will improve your game score, which will improve the rewards you receive at the end.

Steve has been blessed with some serious powers, that can be upgraded throughout the game. He has the ability to shrink down and become just a hand! This enables him to get into smaller areas and gain extra power-ups or collect items that were otherwise out of reach. He can jump very high and not once, not twice, but, three times, in succession! After completeing the third jump - if timed properly - Steve can then perform the most powerful attack he has; the Super Smash (imaginative name, I know!). Steve is also impervious to pain and can regenerate! Pretty cool eh?

Development is going very well and I am having a lot fun, creating the different worlds, for Steve to traverse. I am currently about 60% through development and I am aiming towards releasing the final game in early September, this year. I have a professional voice over artist that will be narrating the game, another who will be the voice of Steve.

There is no team creating this, I am a solo developer, creating the game in Unreal Engine 4.
< >
146 Comments

JForthDesigns  [author] May 23, 2017 @ 5:03pm
Thanks for the all the support! It's really appreciated. I see games are being Greenlit again recently, so, fingers crossed, Steve can make it, this time.

Medieval Steve has been Greenlit and is now listed in the Steam store. For the latest information, purchase options, and discussions for Medieval Steve, please see it on the Steam Store or in the Steam Community.
Visit Store Page
For more details Visit Community Hub
For latest discussions
If you really, really want to, you can continue to the Greenlight page. Information on this page may be out of date, since all the action has moved to the areas noted above.