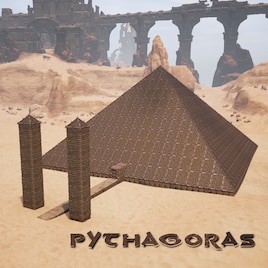 Sunday
Offline
See all 1996 collections (some may be hidden)

This item has been added to your Subscriptions. Some games will require you to relaunch them before the item will be downloaded.
Description
A big thanks to Multigun and Testerle for their massive contribution to updating the mod. Go check out their awesome mods.
This mod adds new building items including:

To keep from stepping on Funcoms recipes, the new recipes are learned with separate feats. These feats don't cost anything but do require you to learn the analogous feat first. E.g. The master mason feat must be learned before the Pythagoras master mason recipes can be learned. (Note: because the recipes don't cost anything, the background doesn't turn green when you unlock it but you still get the recipe.)

COMPATIBILITY: Should be compatible with all other mods. It does not change any base game blueprints. (There's still a small possibility that another mod might use the same item IDs in which case a compatibility patch would be necessary to run the two together.)