Store Page
Total War: WARHAMMER>  Workshop > bennymclennan's Workshop
This item has been removed from the community because it violates Steam Community & Content Guidelines. It is only visible to you. If you believe your item has been removed by mistake, please contact Steam Support.
This item is incompatible with Total War: WARHAMMER. Please see the instructions page for reasons why this item might not work within Total War: WARHAMMER.
Current visibility: Hidden
This item will only be visible to you, admins, and anyone marked as a creator.
Current visibility: Friends-only
This item will only be visible in searches to you, your friends, and admins. 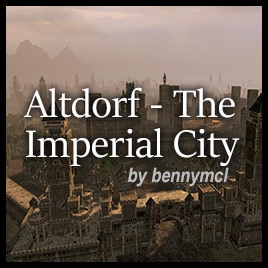 bennymclennan
Offline
See all 151 collections (some may be hidden)

This item has been added to your Subscriptions. Some games will require you to relaunch them before the item will be downloaded.
Description
Hey all

The second map (and boy did this bastard take forever) that I am completing is Altdorf - The Imperial City. Currently a WIP!

I set to making this map a few weeks ago right after I made Talabheim. I thought this venture would take me a similar amount of time, but it took me waaay longer. Hope you all enjoy.

The map is still a work in progress as there are tons of things I would like to get done. You can see my list of hopeful improvements below


THE MAP
-----
So, this map is BIG. It's a huge version of Altdorf. I have tried to stay as true as possible to the lore when placing buildings in certain areas. The idea was to be true to the lore, but also make it so that there are many different strategical options for you to get into.

- 6 bridges - There are 6 bridges connecting 3 landmasses

- University with defensive hills
- For with defensive positioning
- The Palace is a defensive walled position
- 3 Wharfs that are deploy-able for ease of attacking other sections of the city.
- Wide streets for cavalry movement
- Upper class district with defensive advantage elevation


IDEAL USE
-----
This map is intended for 4v4s. It's huge. All of the entrance ways into the city make it so that you either need to divide and conquer or sacrifice part of the city. as the attackers, I would say, try not to be ♥♥♥♥♥ and just deploy everything in one zone and just bottle neck it, but it's up to you. The map is huge with lots of assets and therefore, spreading out units all over the map and actually treating it like 4 different commanders having to work together in different areas of the city, will not only yield the best gaming experience, but also the best performance.

So I have tested it out with AI and it does work in SOME ways. If you have 4 v 4 (humans vs AI) it seems to sometimes be fairly smart and deploy things in an OK way.


FEEDBACK
-----
Over time, I will update this map and take all feedback on board. I would like to improve the map where I can. I realise there will be flaws with the map at first and that everyone map have suggestions, but it was about time I put the map up after weeks of work.

If you have some suggestions, please just post them below. I would be more than happy to answer them.


HOPES FOR THE FUTURE
-----
- Would love to finish the temple of Sigmar. I haven't been happy with it since I built it, but I wanted to make it somewhat of a strategical point
- Add more doo-dads all over the map for markets and the like. It's looking rather bare without them in some places, but they can come at a later date
- I want to improve the AI for the map, but it's secondary right now as the map is meant for human players


SUPPORT
-----
Hey guys, if you wanna support my map making, please leave a thumbs up and share! That's the best way to contribute! The more support each map gets, the more likely I am to put myself through it again and bring another epic map! :) Enjoy!
< >
95 Comments

Prussian Madlad Oct 9, 2019 @ 8:23am
I love this! Plenty of space for large armies. Very detailed. My favorite building is the College of Magic.
Can you make an Altdorf map for Total War Warhammer 2?

Archon Of Commorragh Dec 10, 2018 @ 11:36am
how do i activate the map ingame, because when i attack Altdorf it just pops me in the normal map.

Disciple of CLQ May 16, 2018 @ 10:01am
Thanks @bennymclennan, love this map, i know life gets busy but would love to see in in the combined map! Thanks again man for your work.