Greenlight > Games > SeanNoonan's Workshop
Greenlight is being retired. For more information on how to submit games to steam, refer to this blog post.
This item has been removed from the community because it violates Steam Community & Content Guidelines. It is only visible to you. If you believe your item has been removed by mistake, please contact Steam Support.
This item is incompatible with Greenlight. Please see the instructions page for reasons why this item might not work within Greenlight.
Current visibility: Hidden
This item will only be visible to you, admins, and anyone marked as a creator.
Current visibility: Friends-only
This item will only be visible in searches to you, your friends, and admins.
Jack B. Nimble
Description Discussions0 Announcements5 Comments50 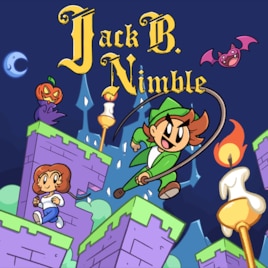 SeanNoonan
Offline
See all 2 collections (some may be hidden)

View Jack B. Nimble in the store

Jack B. Nimble is now available on Steam for Mac and PC, and for one week only, you can purchase Jack B. Nimble at a 25% discount!

Head on over to the Steam page to wishlist and follow!

Jump in the shoes of Jack B. Nimble and master the whip in this cute, retro auto runner.

Leap and dash across spooky hilltops, gothic cityscapes, dank dungeons and more! Whip candles to multiply your score, and use your environment to slow down and stay in control of the action; but watch out for obstacles that block your path! With a score system based on player accuracy and distance travelled, timing and skill are key to achieving a position atop the leaderboard. Are you nimble enough?

Joyeuse Noëlle May 13, 2017 @ 5:33pm
I've been playing Jack B. Nimble on my phone since it was two characters and three maps. As a lifelong Castlevania fan, Jack B. Nimble is the Belmont-inspired infinite runner I'd choose - especially now that there are so many more characters and maps to choose from.

volnes May 13, 2017 @ 9:04am
Hi! Did u plan linux support? Well if u need some testing, let me know!
I really glad to help with testing and bring that game to linux community!
U can look into my proflie and see in what projects i was tester.
Here is my mail: volnes88@gmail[dot]com

belteshazzar May 9, 2017 @ 4:31pm
Been following your posts on Gaf, hope this gets Greenlit man! I do not have an iPhone, so this would be the only way for me to play it. Good luck!

SeanNoonan  [author] May 8, 2017 @ 5:47pm
Thanks for the love so far! It's been a week, so I'm going to compile a little of your voting data so far and provide an update some time tomorrow. Thanks again everyone

Jack B. Nimble has been Greenlit and is now listed in the Steam store. For the latest information, purchase options, and discussions for Jack B. Nimble, please see it on the Steam Store or in the Steam Community.
Visit Store Page
For more details Visit Community Hub
For latest discussions
If you really, really want to, you can continue to the Greenlight page. Information on this page may be out of date, since all the action has moved to the areas noted above.