Yu-Gi-Oh! Legacy of the Duelist

Win in one turn! (Overpowered exodia deck)
By Bewch
Overpowered and simple Exodia deck to win on 1st turn

Effect of each card in exodia deck!

Tips on how to use each card. 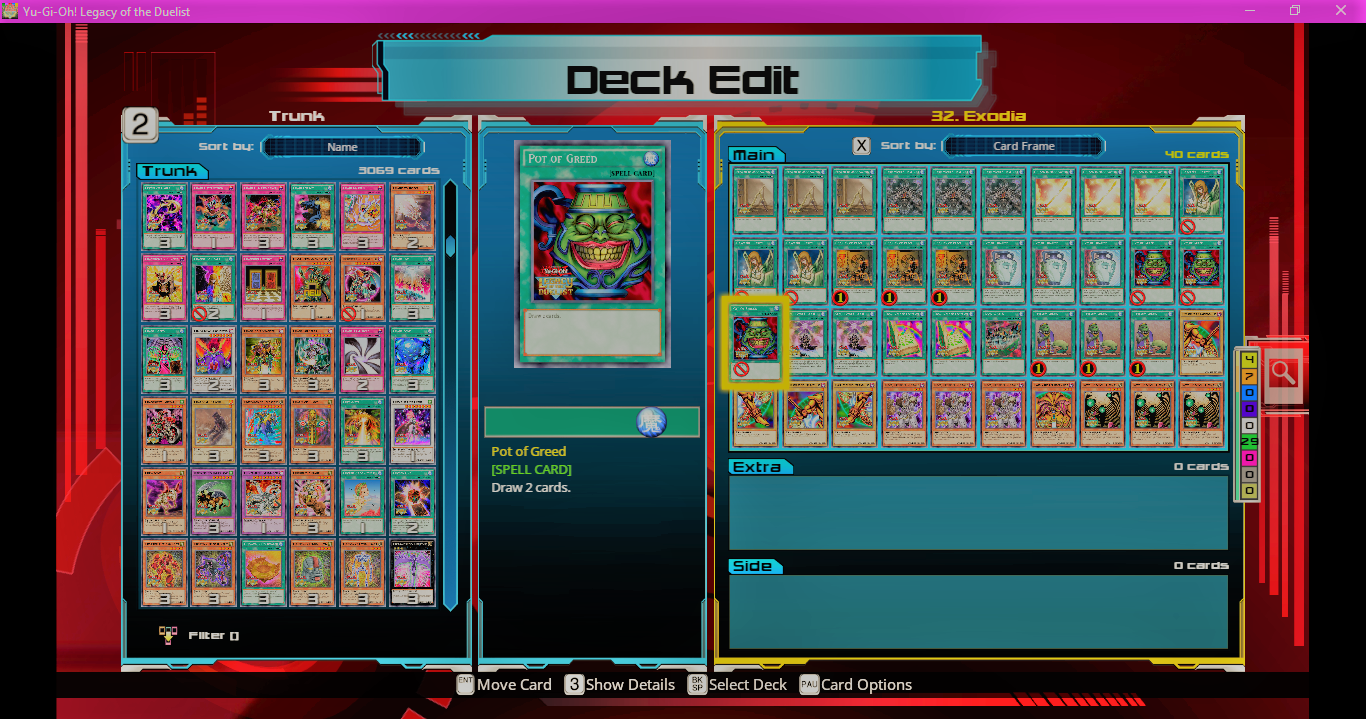 These are the cards and how to get them in Yugioh: Legacy of the duelist, in order to win on your first turn:

One day of peace:
'Each player draws 1 card, and neither player takes damage until the end of your opponents next turn'

Pot of duality:
'Excavate the top 3 cards of your deck, add 1 of them to your hand, also, after that, shuffle the rest back into your deck. You can only activate 1 "Pot of duality" per turn. You cannot special summon during the turn you activate this card.'

Toon table of contents:
'Add 1 "Toon" card or "Manga ryu-ran" from your Deck to your hand.'

Upstart goblin:
'Draw one card, then your opponent gains 1000 lifepoints'

Royal magical library:
'Each time a Spell Card is activated, place 1 Spell Counter on this card when that Spell Card resolves (max. 3). You can remove 3 Spell Counters from this card; draw 1 card.

Broken bamboo sword:
Equip to a royal magical library when you have one available.

Dark world dealings:
Discard a spare card that has no use to you, or is "Broww, huntsman of dark world".
These include: "Toon world" and "Broken bamboo sword" (assuming Bbs is already equipped to a royal magical libary) And these cards if you've already used one this turn: "Royal magical library", "Pot of duality", "Spell power grasp". Preferably better to use when you have these spare cards available. Use other cards in your hand that simply gain cards first to make use of your discarding.

Golden bamboo sword:
Equip "Broken bamboo sword" to a monster first. (Preferably "Royal magical library", and only other option is opponents monster) Then play this card.

Graceful charity:
Same with "Dark world dealings" Wait until you have spare cards to discard. Also works very well with "Broww, huntsman of darkworld". Use other cards in hand first, as to maximise chance of discaring useless cards.

One day of peace:
Use immediately. (Hopefully put down "Royal magical library" first)

Spell power grasp:
Only use on "Royal magical library" when it's current spell counters are in 0 or 1. Retrieve spare "Spell power grasp" from deck and use for discarding.

All 5 pieces of the forbidden one: (Exodia)
Keep in hand, never discard or summon. (Needed to win game)

Broww, huntsman of dark world:
Free discard to draw one extra. Use in conjunction with dark world dealings and graceful charity only.

Royal magical libary:
Summon as soon as possible. (The only card you should summon) use in conjunction with everything in deck apart from the monsters. Activate effect when 3 spell cards are used. (Excluding spell power grasp)
< >
35 Comments

The deck for me carried me through each duel. 90+% first turn win, and like 5% second turn win.

If you've found a way to make it easier, then create your own deck.

dmtdeadpool May 3 @ 7:16am
Two Spell power grasp is excessive. Can only use one per turn, and the deck is geared towards OTK One is fine and add a cursed bamboo in it's place. Also Royal library, three is too much, would remove one and add another cursed bamboo, also drop one broken bamboo and add a third cursed. Three pot of duality is also a bit much, for an OTK deck having too many once per turn effects can turn into dead hands too many times, forcing a second turn. The only times I have lost or had to go two turns or more is cause my hands were full of dead once per turn cards.

ypsilon Mar 9 @ 3:57pm
the cursed variant has the pro, that if you get it into your grave, you can give yourself a golden bamboo sword, so you can draw 2 more, so its a good additional effect, thats pretty good, since you have some cards to throw cards to your grave! :)

Bewch  [author] Mar 9 @ 3:21pm
Again, it's been a long time since I've played seriously played Yugioh, so there's a decent chance I'm wrong or have a poor memory of my decision making from years ago. The main point is that the difference in them two cards is extremely minimal in this deck and the fact that you brought it up confuses me beyond my belief.

Bewch  [author] Mar 9 @ 3:21pm
Read the description under the screenshot. Cursed Bamboo Sword and Broken Bamboo sword have literally no difference for the purpose of winning on your first go.

Additionally, I believe if you return a Cursed Bamboo sword to your hand (by accident), you can't place it down again, or another one until your next turn. Whereas you can equip 3 Brokens no matter what, to get a free card from RML. Might be wrong, haven't played Yugioh in ages. So for the purpose of winning on your first go, it is objectively knocking down the very small chance of losing maybe a third or two-thirds of an extra card to draw? If this deck was made for winning on your second or third turn, I'd agree. I used cursed on duel links i think i remember.

Bewch  [author] Jan 26 @ 8:32am
This guide was made a while before Link Evolution. I honestly got a bit of a headstart on annoying exodia decks from being a scum on dueling network back in the day. So I just went with what worked. If you find improvements and can explain them, I'd be very intrigued to know them!

Cryptic Bore Jan 21 @ 5:47am
*Nods* i appreciate the help and write up, another thing to note: i found this guide from google and one thing that threw me for a spin was the drops weren't matching up and then i realised this guide is for Legacy of the Duelist not Legacy of the Duelist: Link Evolution. Not sure if steam will let me link but i used https://db.ygoprodeck.com/lod/ to find out who i fight and which packs to open to get the cards.

still havnt got everything yet. but instead of toonworld stuff etc im using mallet and spell repoduction (theres probs a cheaper alternative to spell reproduction, i just dont know yu gi oh that well to find it). im missing one golden bamboo and 2 cursed swords but im winning most games as is xD, still have a copy of swords of revealing light and that trap card that lets you draw 2 on your opponents draw. .