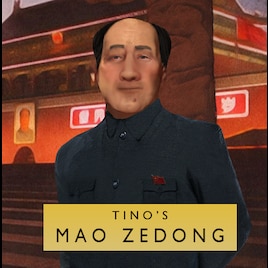 Tino
Offline
See all 245 collections (some may be hidden)

This item has been added to your Subscriptions. Some games will require you to relaunch them before the item will be downloaded.
Description
Adds the leader Mao Zedong as an alternate leader for China. Mao Zedong uses an existing aganda - Ideologue, and owns a unique ability - The Mass Line, with a unique unit - WPRA.

The Mass Line
Your civilian units +2 Movement, and -4 Combat Strength to adjacent enemy units. All cities +33% Production when you enter a Dark Age. Gainss the WPRA unique unit when the Ideology civic is researched.

WPRA (Workers' and Peasants' Revolutionary Army)
Chinese unique Modern era melee unit that replaces the Infantry, when Mao Zedong is their leader. High Movement and can move after attacking, but does not exert ZOC. Gains Gold from combat victories.

Support:
Expansion: Rise & Fall
Mods: Yet (not) Another Maps Pack

Troubleshooting:
Try this patch to solve the "start a game" problem caused by an official bug.
< >
378 Comments

Wolfix.Player.pl May 27 @ 6:37am
maybe an update for the new version? make him great again