Store Page
Arma 3>  Workshop > Jörmungand's Workshop
This item has been removed from the community because it violates Steam Community & Content Guidelines. It is only visible to you. If you believe your item has been removed by mistake, please contact Steam Support.
This item is incompatible with Arma 3. Please see the instructions page for reasons why this item might not work within Arma 3.
Current visibility: Hidden
This item will only be visible to you, admins, and anyone marked as a creator.
Current visibility: Friends-only
This item will only be visible in searches to you, your friends, and admins. 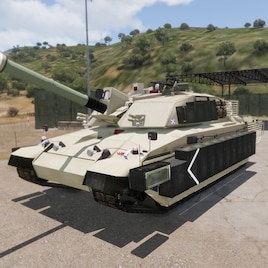 This item has been added to your Subscriptions. Some games will require you to relaunch them before the item will be downloaded.
In 3 collections by Jörmungand
Burnes Armories Collection

The British FV4034 Challenger 2 TES MBT. Comes in 5 camo patterns and has a turret interior. There are many unfinished areas but i figure at this point i could do with some feedback and community testing to work out the values in armor etc. The armor has almost not been tested i gave it a quick blast to destruction just to make sure it was working, bear in mind that the real life challenger 2 is very tough. As in reported to be the most heavily armored tank on the planet. In one engagement it was hit by over 60 rpg's and a Milan anti tank weapon, the optics had to be switched out and it was back in service 6 hours later.

The AI gunner problem is still there. AI gunner will not fire the main cannon by himself. you have to press CTRL FIRE to make your AI gunner fire but at present fully AI crewed vehicles will not fire their main gun.. There are some missing scripts for checking ammo count etc but that was down to my forgetfulness rather than them not being ready and i expect to update this later in the week with a finished interior etc.

Anyway, this is my favorite piece of military equipment of all time so I hope I've done it justice. Let me know what you guys think."

Notorious Jul 1 @ 6:32pm
@belief
This stuff is discontinued and not that balanced compared to RHS or vanila tanks

belief Jun 29 @ 11:00pm
Can I use this mod for public servers? Our server must get permission to repack when adding mods. I wish there were more tanks on our server.

SKYKID Jul 14, 2020 @ 12:46am
has anyone had any type of success using this in recent time like I wish she still was doing and updating these mods they are brilliant im in a British armed forces milsim group that needs a MBT but there is no standing one at the moment

dafrandle Jul 21, 2019 @ 7:37pm
must have been spite that caused them to remove or not release to public key for this, such a shame