Store Page
Transport Fever>  Workshop > kaleut's Workshop
This item has been removed from the community because it violates Steam Community & Content Guidelines. It is only visible to you. If you believe your item has been removed by mistake, please contact Steam Support.
This item is incompatible with Transport Fever. Please see the instructions page for reasons why this item might not work within Transport Fever.
Current visibility: Hidden
This item will only be visible to you, admins, and anyone marked as a creator.
Current visibility: Friends-only
This item will only be visible in searches to you, your friends, and admins. 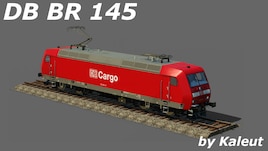 adlerbanner
Offline
See all 408 collections (some may be hidden)

This item has been added to your Subscriptions. Some games will require you to relaunch them before the item will be downloaded.
Description
Hallo,
i provide the BR 145 for you. I built this model completly new for transport fever.
The BR 145 is a freight train locomotive for light and medium-weight freight transport. In 1997, the locomotive was presented to the public and in January 1998 the design approval of the Federal Railway Office was presented. So the delivery of the 80 ordered locomotives began. The last locomotive was delivered in the year 2000. These locomotives are the forerunners of the TRAXX family.
The model has .dds textures, 4 Lod's, driver's cab with locomotive drivers and dirt textures. Since Transport Fever is currently not able to display light behind glass panes, this was realized via a corresponding texture. Correct light will be implemented as soon as this is allowed by the game. Player logos and coloring will not be supported and will never be.
The set contains 4 liveries of the BR 145: DB Cargo, Railion, Railion Logistics and DB Schenker.

BR 145 vorderer Pantograph:
Adds the BR 145 with the front Pantograph up, to the game.

BR 145 Fakeversionen:
Adds fake versions of the BR 145 to the game.

To unlock the modoptions, you must use the TPFMM.[www.transportfever.net] or edit the settings.lua in the corresponding mod folder.

You really like my work? Then just leave a comment, a thump up or spend me a little drink.

You have found an error or you want discuss about the model? Take a look here[www.transportfever.net]

Have fun with the model.

You disrupt the Steam discussion forum? Get your stuff together and join us on

Notice:
Without my written permission, the re-use of this mod in parts or as a whole is prohibited.
It is also prohibited to upload the mod to other websites or file hosters. Should this happen, I will take legal action if necessary.
I accept no responsibility for damages to software and hardware.
If you make changes at the model for private use, no screenshots and / or videos may be published in any form, including live streams. Furthermore, it is forbidden to publicize these changes.
The distribution of modified versions of the mod is prohibited.
If you want to change the mod and publicly announce it or create a repaint, permission must first be obtained from me or a contributor.
< >
11 Comments