Greenlight > Games > marox's Workshop
Greenlight is being retired. For more information on how to submit games to steam, refer to this blog post.
This item has been removed from the community because it violates Steam Community & Content Guidelines. It is only visible to you. If you believe your item has been removed by mistake, please contact Steam Support.
This item is incompatible with Greenlight. Please see the instructions page for reasons why this item might not work within Greenlight.
Current visibility: Hidden
This item will only be visible to you, admins, and anyone marked as a creator.
Current visibility: Friends-only
This item will only be visible in searches to you, your friends, and admins.
Mordhau
Description Discussions7 Comments520

Spook
Online
See all 62 collections (some may be hidden)
Kickstarter

View Mordhau in the store

Mordhau is a multiplayer medieval fighting game where fights range from duels all the way to large, open battles of up to 64 players with horses, siege engines, and castles to be stormed. It features a skill-based free-flowing combat system that is easy to learn, but hard to master.

The game is being built on Unreal Engine 4 and will be released for Windows PCs. Other operating systems and platforms might follow post-release, but there are no concrete plans at the moment.

FEATURES
FREE-FLOWING COMBAT. Chain your attacks into combos, punish your opponents with quick counters, push them away with kicks, trick them with feints, grip your polearm closer to the head, use real halfswording techniques -- and much, much more. And the best part? You can combine it all, any way you want. Get creative with your play-style. 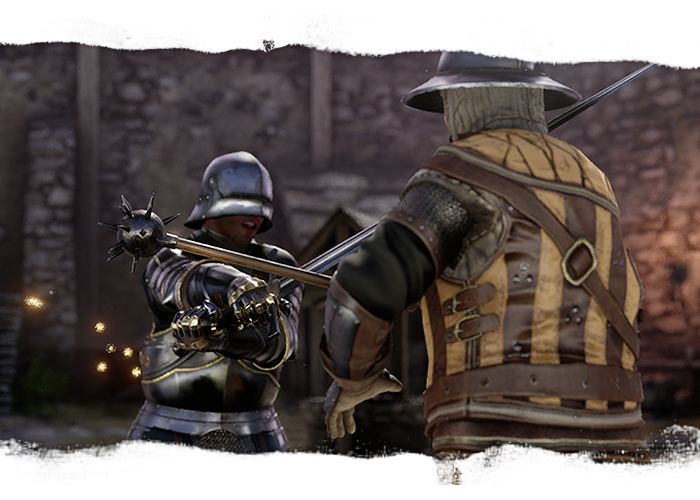 EXPRESSIVE CONTROLS. An entirely new dimension of input. Our melee combat system allows players to cut and thrust from a total of 240 different angles by flicking their mouse in the desired direction. If you prefer a controller over a mouse, or a more traditional control scheme, don't worry, we've got you covered.

REAL-TIME COLLISION DETECTION. Your blade will cut exactly where it looks like it should. Weapons can clash together, resulting in fast-paced exchanges and the occasional loss of hands.

BELIEVABLE FIGHTS. A game where fights look believable, Mordhau strikes a balance between gameplay and realism. Ballerinas and circus performers are replaced by carefully designed combat mechanics. We are confident that our system solves most of the common problems of this genre, and is also heaps of fun.

GORE. LOTS OF GORE. Decapitate your foes, cut off their arms, hands and legs and watch throats being slit while they gurgle their last breath away. And for those with a weaker stomach, we will offer options to tone the gory visuals down a notch.

DEDICATED SERVERS. Bad netcode can ruin a multiplayer game, especially a melee title with a focus on precise timing. Peer-to-peer? No, thanks. Dedicated servers ensure a stable experience and low ping.

SIEGE ENGINES. Take out enemies from the safety of your catapult, scale siege ladders and fight on them, or pin enemies down with a well-placed ballista shot. 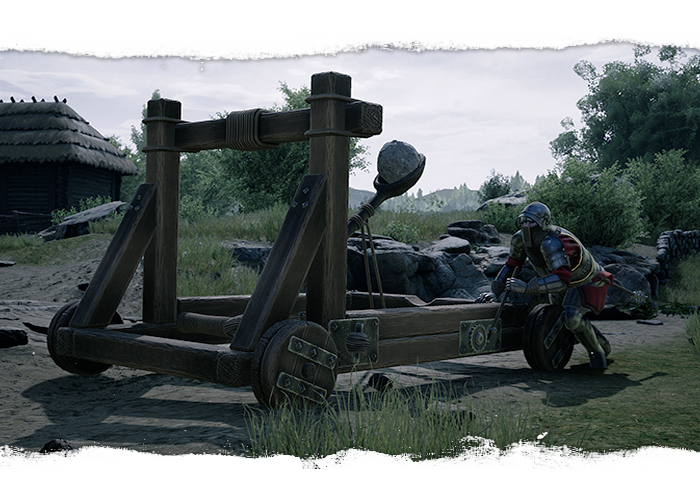 MAP INTERACTIVITY. Bring gates crashing down on enemies, chuck boulders off of castle walls, and pick up and drop equipment as you go. Interaction is a big part of the game, and it spices up every match.

FIGHT ON HORSEBACK. Plow through the enemy ranks on your horse and launch surprise flank attacks on the enemy archers. Take care not to get swarmed and overwhelmed by infantry!

VARIED BATTLES & ENVIRONMENTS. Our combat system is designed for fights ranging from duels all the way to large open battles of up to 64 players with castles to be stormed, and fields to be covered in blood. A variety of environments will keep each battle interesting, as we will take you from dusty deserts, to lush green forests, and even icy peaks. 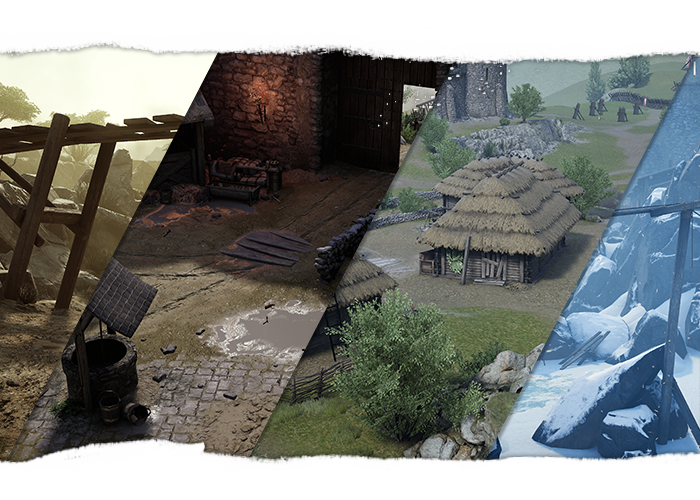 RANGED COMBAT. The game’s arsenal includes ranged equipment such as bows and crossbows. You can also throw your sword, preferably into someone’s face. Projectiles will collide with other projectiles, and even attacks. See an axe flying towards you? Bat it away.

EXPRESS YOURSELF. Use animated emotes and voice commands to scream at the top of your lungs as you charge into battle, or simply sit back and laugh at your enemy's demise.

CREATE YOUR WARRIOR. Pick your gender, choose the type of body, adjust facial features, and even sculpt a face to your liking. We want you to be recognized from how you look, as well as from how you fight.

SUIT UP. Create your suit of armor: pick from gloves, arms, shoulders, chest pieces, legs, boots, helmets, and more. Color each piece to your liking and select a metal tint. Pick an emblem that represents you well, and you can even choose how polished you want the metal to be. Be anything from a viking to a crusader.

BUILD YOUR WEAPON. Smith your sword out of individual pieces: pick from blades, crossguards and grips. Want a mace instead? No problem, pick your head and handle and choose the wood type. There are hundreds of possible combinations. 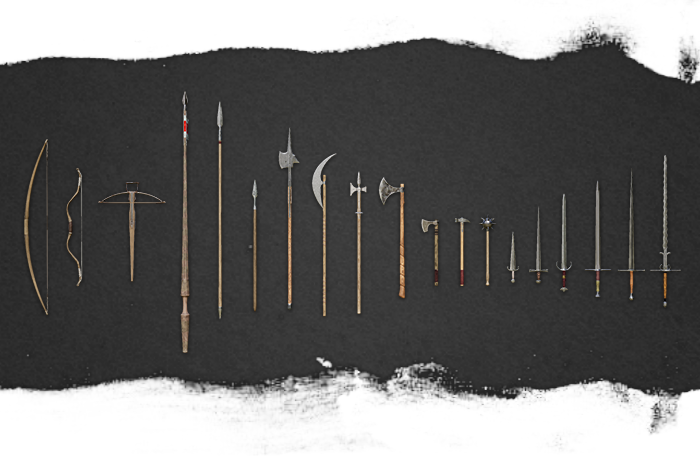 WATCH & LEARN. Spectate other players in first or third-person to see how they play and record your battles to watch them from different perspectives with our demo system. We even used it to record our gameplay trailer!

BUILT FOR PC. Choose your desired field of view, unlock your framerate, set all manner of control and quality options that have once been taken for granted, but are now missing in many recently released games. 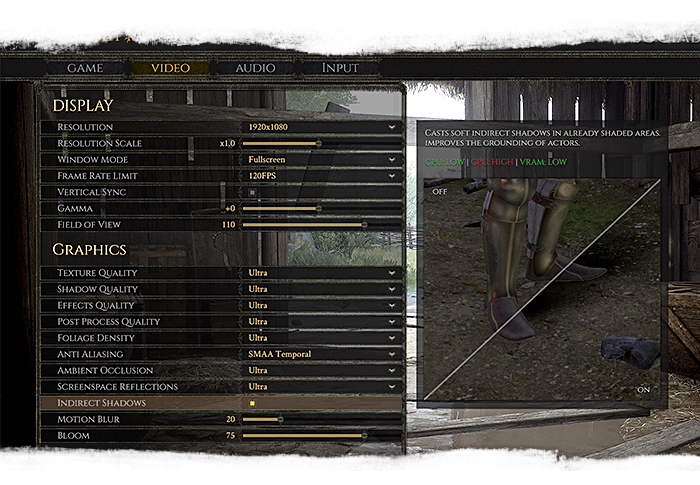 OFFLINE PLAY. Mordhau is primarily an online game, but you can play the game offline against bots with different personalities and difficulties.

NO EARLY ACCESS. We aim to deliver a polished game that we will continue to expand with post-release content and updates.

END HIM RIGHTLY. Yes, you can unscrew and throw your pommel in this game.
Popular Discussions View All (7)

Man Of Spaghetti Dec 11, 2018 @ 1:26pm
if the catapult is not replaced with a trebuchet on release, or there is both but the trebuchet is better, as it is in reality, r/trebuchetmemes will boycott.

W.B.Y | Anicetus Sep 17, 2018 @ 12:17pm
W.B.Y will be all over this. Welcome back to hell brothers we shall indeed behead all of you in time. We cannot wait to begin competitive servers

Λ Metro Cop Jul 21, 2018 @ 10:06am
@jusT Why thanks I just barely missed the kickstarter and just cant wait for the game thanks

jusT Why Jul 17, 2018 @ 7:11am
@MetroCop greenlight doesn't work after what I know, they shut greenlight down.
there was a kickstarter campaign to fund the game and those who funded it were given rewards such as beta access, early access and more. The only way to play the game now is through beta I think, but you need a key for that, but the kickstarter campaign has ended, so there isn't really a way to get the game right now, unless someone has a spare key they can sell.

Λ Metro Cop Jul 16, 2018 @ 12:08pm
How does this greenlight thing work if I buy greenlight will I be able to support the game or actually play it? Also when the game is released will it still be playable?

Mordhau has been Greenlit and is now listed in the Steam store. For the latest information, purchase options, and discussions for Mordhau, please see it on the Steam Store or in the Steam Community.
Visit Store Page
For more details Visit Community Hub
For latest discussions
If you really, really want to, you can continue to the Greenlight page. Information on this page may be out of date, since all the action has moved to the areas noted above.