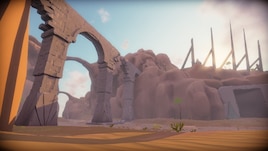 This item has been added to your Subscriptions. Some games will require you to relaunch them before the item will be downloaded.
In 1 collection by Synovus
Synovus Islands

45 items
Description
The harsh living conditions of the Great Expanse forced a unique solution to shelter in the arid desert for the Dihrak people. Established at the tributary of the Gijan River, the underground Dihrak complex provided sanctuary to thousands of exiled Saborians after the cleansing in Sabor's so-called Golden Era. But as the waters of the Gijan trickled to a stop so too did the culture it once sustained.

Note: This is my most ambitious project yet, planned every % of complexity from the start and optimized by using low poly assets throughout. Over 50 hours, 4000+ hand placed objects, touches the size restriction limit on 4 sides and did small scale detail elements throughout. Pulled out all the stops, hope you enjoy!

Uses material set and asset groups from The Badlands Collection

CommanderEcks Jul 7, 2017 @ 8:12am
Seriously a work of art. I think it will take people who actually use IC to understand that a lot of those pieces are not simply plopped down, and that all of those small blocks and girders had to be individually placed to make the crashed bridge and the fallen down structure look so authentic. And the "beds" and, well, everything. I can appreciate your attention to detail because I have tried to work in my own islands, and you, sir, are great at creating.

Synovus  [author] Feb 27, 2017 @ 1:32pm
Wow! That is quite the compliment @OddNova, I'm flattered, humbled, and thankful for the loot feedback. With so many small islands that can be fully explored in a dozen minutes I wanted to design a lengthy experience so I'm extremely happy that you had such an extended stay. Fingers crossed it doesn't cause insane lag when loading in.

With such a large scale island I tried to keep the chests and knowledge stones in the main areas to be more consistently rewarding but I might tweak the loot balance still. In total there are 3 chests, 4 murals(3 broken), 5 knowledge stones, and around 15 of each loot ruins/containers.

Didn't think you'd be able to squeeze through the door gap to the small room, but I forgot to actually make it accessable so thanks for the heads up.

OddNova Feb 27, 2017 @ 11:21am
Another gorgeous superb creation, Synovus! That definitely should be in the final game! This is so great I'd like to give more than one like!
Although I generally don't like deserts, Exiled is now on place one of my collection Sense of Wonder http://steamcommunity.com/sharedfiles/filedetails/?edit=true&id=871584750

I spent two hours 'on foot' exploring and being amazed by the atmosphere there.

On the bottom of the great circular chamber, on the second room right from the (east) exit (the exit without a symbol - when seen from the inside), I got stuck in the doorframe bottom gap when passing back from the southwest anteroom. It was impossible to jump or grapple out. Had to use Esc.

If you aren't already, you might consider to work in game development. Seriously. imho you're that good.

Synovus  [author] Feb 27, 2017 @ 10:09am
If I had to guess, we'll get a release prediction on Thursday's livestream but I'd be surprised if it was released this week

Synovus  [author] Feb 27, 2017 @ 10:01am
A few of us on Discord are helping to find bugs and issues with the Beta Island Creator build before the update goes public