Greenlight > Games > Demigiant's Workshop
Greenlight is being retired. For more information on how to submit games to steam, refer to this blog post.
This item has been removed from the community because it violates Steam Community & Content Guidelines. It is only visible to you. If you believe your item has been removed by mistake, please contact Steam Support.
This item is incompatible with Greenlight. Please see the instructions page for reasons why this item might not work within Greenlight.
Current visibility: Hidden
This item will only be visible to you, admins, and anyone marked as a creator.
Current visibility: Friends-only
This item will only be visible in searches to you, your friends, and admins.
Nothing Can Stop Us [encore]
Description Discussions0 Announcements1 Comments19 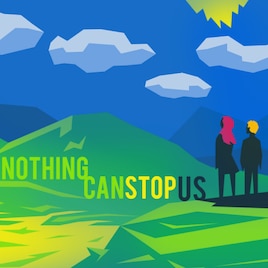 Thank you all for the support, Steam people included.

While Nothing Can Stop Us [Encore] got greenlit, I almost finished the editor for this new version. Then I'll start to work on the actual game (part of which is already done and just needs to be rewritten better, while a lot will be completely new). Then I'll improve the editor more, then back to the game, then editor time again, and so on, until everything is exactly as I want it to be. This is a personal project for me and thus, as with Goscurry, I already know I'll spend a lot of time on almost useless details because that's who I am, shame on me.

I plan to release NCSU[E] in the last quarter of 2017 (I'm also working on another secret-ish sci-fi game with a few friends) for a few bucks. See you there ;)

Read More
Description
Release date: Mysteriously undetermined (but before the apocalypse—probably; you never know these days)
A short (15/20 minutes), cutting, heartfelt narrative experience about friendship, valleys, aliens, and old—but not necessarily good ol'—times, which will change each time you replay it.

A NOTE: Video and screenshots are from the very limited jam version. The GIFs below give a better (but still barebone) idea of the visual direction the [encore] version will take.

Nothing Can Stop Us is a mature dialogue-based adventure, featuring a deep story, hard—and silly, cruel, sometimes heartbreaking—choices, multiple endings, an experimental camera AI, and lots of love. The first playthrough will be similar—although deeper—to the jam version. But the game will know every time you played: following playthroughs will be very different from each other, and based on your previous outcomes/choices.
Developed by Daniele Giardini (Demigiant)[www.demigiant.com] with the wonderful music of Ben Burnes[abstractionmusic.com].

Here's a first look at a couple of the environments of the [encore] version (still barebone):

.../ History
Nothing Can Stop Us was made during Adventure Jam 2016 (won 1st place as "Most Thought Provoking" adventure, 2nd for "Best Dialog", 3rd for "Best Story"). It was developed in 4 days and written in a little more than an afternoon, so there's a lot I didn't have the time to do, or didn't develop well. I'm now remaking it from scratch into what it intended to be, with animations, multiple branching storylines, a better comic-based interface, and an experimental camera AI, while experimenting different ways to tackle narrative in video games.

.../ A few nice reviews
IndieGames com - Konstantinos Dimopoulos[indiegames.com]
A beautifully illustrated, dialog-based game that offers a novel take at the CYOA formula. It's a simultaneously touching, funny, thought-provoking, beautiful, and brilliantly written attempt at excavating the future in the past.

Free Game Planet - Calum Fraser[www.freegameplanet.com]
...Nothing Can Stop Us is an incredible bit of storytelling. It’s a joy going through the ups and downs of memories of the pairs friendship, with some laughs and some very powerful emotional moments...
< >
19 Comments

Demigiant  [author] Jun 20, 2018 @ 1:00pm
I actually postponed this for a while, as I'm working on another game with my lady Centenary [www.demigiant.com] :) I just updated the release date to "Mysteriously undetermined", but I hope to get back to it in the second half of 2019.
But hey, thanks for asking, really :)

Gnome KD Feb 26, 2017 @ 3:45am
This is bond to be utterly wonderful and thoroughly thought-provoking! Can't reccomend it enough.

Demigiant  [author] Feb 24, 2017 @ 5:26pm
Thank you people.
@ThunderGemios10 you're always the best ;)
@reorso @jokobo11689 I'm still working on the new balloons graphics, but I don't think I will make different balloons other than for color and size. Instead, I'll make the text itself look more different (and also use camera and animations to convey dialogues and sensations). Other than a dev, I'm a comic author at heart, so I'm experimenting with that type of aesthetic which I love :)

reorso Feb 24, 2017 @ 3:08am
I think you could improve thegraphic of dialogues by giving them diffrent graphic based on the event that occurs. I mean, always the same shape, always the same colours, always the same font... the concept is really good tho, but more personalization gives better feelings and help user to understand better situation throught sensation.
< >