Greenlight > Games > TwoStudentsLLC's Workshop
Greenlight is being retired. For more information on how to submit games to steam, refer to this blog post.
This item has been removed from the community because it violates Steam Community & Content Guidelines. It is only visible to you. If you believe your item has been removed by mistake, please contact Steam Support.
This item is incompatible with Greenlight. Please see the instructions page for reasons why this item might not work within Greenlight.
Current visibility: Hidden
This item will only be visible to you, admins, and anyone marked as a creator.
Current visibility: Friends-only
This item will only be visible in searches to you, your friends, and admins.
Buds 'N Blood
Description Discussions0 Announcements1 Comments9 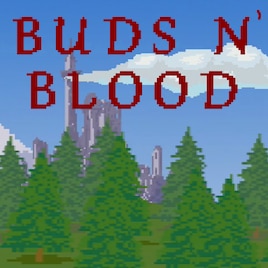 We love constructive comments on how we can improve the game. We are already aware that it may have been too early to put the game on greenlight. Leave all constructive criticism either here or in the comments! :)

Read More
Description
Release date: Early Release Summer 2017
Buds 'N Blood
Buds 'N Blood is a 2D side-scroller game in which you go head to head with enemy goblins and trolls. Amass armies and swarm the enemy base for the most intense combat. Unlike other 2D games, Buds 'N Blood uses minor gore and enhanced graphics to make the game feel unlike any other. What you see in the video and screenshots above is the very basis for the game, as the game is in early development, and is being developed by one programmer and one artist. Here are some of the planned features:

The planned Early Release price for the game will be $5. Let us know what you think.

More units:
Goblin Blunter: Massive enemy unit that will tear through lines of your men.
Archers: Classic archer which will rain terror upon the enemy
Many more units are planned!

Multiplayer:
Conquest: 5 total castles on the map, capture castles to push the enemy back.
Online Castle Siege: Battle with an enemy player and attempt to capture their castle and kill their king.
2v2: Team up with a player and battle to the death while trying to kill the enemy castle and king.
Head-To-Head: Fight with one enemy player for control over the center capture point.
Ranked: Battle enemies 1v1 for a rank, and win points by winning matches.

Singleplayer:
Campaign: 30 Level campaign in which you learn the storyline of Buds 'N Blood and battle your way to victory.
Offline Castle Siege: Attack a castle with a certain amount of troops you select with the amount of money provided, differs per difficulty type.
Survival: Fend off endless waves of enemies, and see how long you can survive.

Construction:
Construction will be a huge part of the Buds 'N Blood final game release. You will be able to build mines and campfires to gain more gold, and build more units. Builds Barraks to help train more units! Defensive buildings such as arrow towers will also be available for building.

How to play:
Use coins given per second and per kill to buy units and force the enemy back.
Command your units to defend, attack, or hold the center capture point for a strategic advantage. (Capturing the center point gives you double coins per second)
Counter enemy hordes with swarms of weak units, or groups of heavily armed units.

Please leave any comments or suggestions on the game's mechanics and feel. NOTE: THIS GAME IS IN EARLY DEVELOPMENT, AND IS MOST LIKELY GOING TO CHANGE BEFORE RELEASE.

Thank you for reading, and I hope to see you on the battlefield.
< >
9 Comments

Veskaida Feb 21, 2017 @ 4:19pm
lol, I actually really like the walk animation for the knight guy. It's goofy, but hilarious too, especially with the trailer music.

Art looks pretty good, but the gameplay looks a bit too simple. Not seeing a lot of variety between the different units playing differently. Like, all their attacks seem very similar except in visuals.

nat Feb 19, 2017 @ 6:21pm
Oh god okay the music can buck off you guys have to rework on that completly new. Better find and hire a talented composer or learn the basics if you have much time <.<
The art looks, if you guys did made it and not some bought asset shit, acceptable so far but the background art at the bottom is zoomed out which kinda looks weird and the grass needs more.. well, grass.
Gameplay, not good enough for me. It needs more depth and you show us only one level(?)

Anyway, good luck but I believe this is too early for greenlight so gonna vote No :(