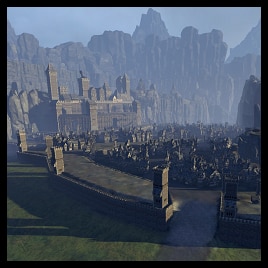 Girion
Offline
See all 13 collections (some may be hidden)

This item has been added to your Subscriptions. Some games will require you to relaunch them before the item will be downloaded.
Description
This map is made at maximum size allowing major battles. It features the city of Helmgart, strategically positioned in the pass connecting Bretonnia and the Empire. The two armies start at either side of the city and will have to fight it out within its street, or in the small mountain paths high above.

The city is composed of three tiers and contains big streets and plazas, for the armies to move, but also smaller alleys that are perfect for a hero or a small unit. The walls offer good places for missile units, making the city hard to assault. A gambit could be to deploy a vanguard force in the city and try to hold it until you main army arrives.

Alternative strategies involves moving up in the narrow roads in the mountains to try and outflank the enemy. Here you can also find a good lookout point over the map, as well as a platform overlooking the city from which artillery can rain down hell.

This exciting and spectacular battle map have lots of option and give, vanguard units, flyers, and other high mobility units a time to shine while they support you main fighting force.

Despite it's size and detail I have found no sign of performance problems. Some of the blocks in the wall pop up a little above the other. I have no idea why, they are all fine in the map editor. I have remove most of the shadows from the mountain, they darkened down the settlement more than I wanted and I wanted things to be clear.

(If you want to you can pay extra attention to the details. I have made sure to add doors to buildings that would have been missing them. Also notice the castle overlooking the town which have been hand crafted. If you find any clipping errors or such you can tell me and I will fix them!)

This map is also available in an Siege version with different deployment zones:
http://steamcommunity.com/sharedfiles/filedetails/?id=864857114

Girion  [author] Apr 20, 2017 @ 11:59am
Just made revisions to all my maps. Nothing major but several details have been improved. I have added a few more AI hints, also the grass should look better on a few maps.

Girion  [author] Mar 30, 2017 @ 11:54am
Check out my latest map: Varenka Hills
http://steamcommunity.com/sharedfiles/filedetails/?id=894719859
Featuring a dwarven settlement built over several large hills with lots of tiers. There's also a large river crossed by 4 bridges. Otherwise the main focus of the map is the city, which covers most of it.

Girion  [author] Mar 10, 2017 @ 5:27am
It seems that you can only have one set of camapign maps at the time. So if I make a campaign pack of my maps you could not use it at the same time as another campaign map pack.

However there seems to be a couple of guys making a big pack from several authors so I will look if I can get my maps added with thoose. I will write here with updates when I got it.

Girion  [author] Feb 22, 2017 @ 5:52am
Right now this (and most other) aren't available for the campaign. However I hope that I can make it available once the old world edition arrive next week. At the same time more people will likely do the same to their maps.

Also are there other campaign maps availble to add to the campaign around?

Because this map for example is just excellent, and it would really make the campaigns interesting.

Thank you in advance.

Girion  [author] Feb 17, 2017 @ 7:24am
An interesting note is that the Siege version of the maps seems a lot more popular than this one. Maybe unsurprisingly siege maps seems very m8uch to be "The Stuff" right now.

However I think I will keep to more settlement sieges and not full blown city ones, but rather wait until they add Siege support until I try to make "Altdorf the Siege" or something like that. The hope is to make maps that can be added to the campaign and I don't want to put lots of effort into Siege maps when they can be made even better with Siege support, while not confirmed I do think it's likely that we might see it someday.

Girion  [author] Feb 17, 2017 @ 7:21am
Thank you, I've decided to try and put as many interesting features as I can come up with into the map. As a result they are not symmetrical and maybe not 100% balanced, but I didn't really liked the looks of symmetric maps either.

I have remade the deployment zones of this, as well as my other two maps to allow to play them like sieges.