Greenlight > Games > Cloak and Dagger Games's Workshop
Greenlight is being retired. For more information on how to submit games to steam, refer to this blog post.
This item has been removed from the community because it violates Steam Community & Content Guidelines. It is only visible to you. If you believe your item has been removed by mistake, please contact Steam Support.
This item is incompatible with Greenlight. Please see the instructions page for reasons why this item might not work within Greenlight.
Current visibility: Hidden
This item will only be visible to you, admins, and anyone marked as a creator.
Current visibility: Friends-only
This item will only be visible in searches to you, your friends, and admins.
Sumatra
Description Discussions0 Announcements3 Comments50 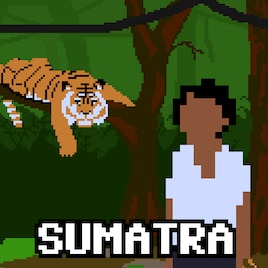 Cloak and Dagger Games
Offline
See the collection (may be hidden)

View Sumatra in the store

Yay! Thanks for your support :)

Thanks again for your support of our upcoming game, Sumatra. The Greenlight campaign has been going very well, we are now at 299 yes votes, just one shy of 300! We have a very healthy yes/no ratio which is giving us a lot of confidence moving forward. Any help you can give us to push past 300 and beyond is always immensely appreciated!

A few days ago we had a great boost in votes thanks to the legend that is Ron Gilbert, creator of Monkey Island and Maniac Mansion, who retweeted us on Twitter. Being a fan of Mr Gilbert since I was a child, this was possibly the coolest thing that has happened since we started making games, and I may indeed print this screenshot off and frame it. Thanks for your support,

Read More
Description
Release date: 2017
From the makers of A Date in the Park, Mudlarks and The Terrible Old Man comes SUMATRA, an all new jungle adventure! You are Yandi, a villager who works for the Pandang Logging Company deep in the Sumatran jungle. An accident leaves you stranded and alone. You must survive, you must escape. Along the way you'll meet a multitude of jungle beasts, tribes-people, scientists and nefarious loggers. Can Yandi get out alive?

What are the features?

- An old school point and click adventure aesthetic with puzzles galore
- A range of interesting characters, including Kubu tribespeople and creatures unique to the Sumatran jungle
- A variety of subplots to keep Yandi on his toes as he tries to escape the jungle
- Playable flashback sequences that paint a picture of where Yandi has come from and how his attitudes have formed
- Cool 8-bit soundtrack
- Mystery, intrigue and surprise! Uncover secrets along the way
- Decision-making elements
- 3+ hours of game play Wait, this looks a little familiar!

Sumatra is an expanded version of our well received free game from 2015, Pendek. While Pendek had around 20-30 minutes of gameplay, Sumatra will feature at least 3 hours of adventuring, with many added situations, plot-lines and characters.

How much will it cost?

Toolkitz Games Mar 5, 2017 @ 11:30am
Great looking graphics. You did well with a limited amount of color. It truly is like an old school game. You got my vote.

Sumatra has been Greenlit and is now listed in the Steam store. For the latest information, purchase options, and discussions for Sumatra, please see it on the Steam Store or in the Steam Community.
Visit Store Page
For more details Visit Community Hub
For latest discussions
If you really, really want to, you can continue to the Greenlight page. Information on this page may be out of date, since all the action has moved to the areas noted above.