Greenlight > Games > The Broken Horn's Workshop
Greenlight is being retired. For more information on how to submit games to steam, refer to this blog post.
This item has been removed from the community because it violates Steam Community & Content Guidelines. It is only visible to you. If you believe your item has been removed by mistake, please contact Steam Support.
This item is incompatible with Greenlight. Please see the instructions page for reasons why this item might not work within Greenlight.
Current visibility: Hidden
This item will only be visible to you, admins, and anyone marked as a creator.
Current visibility: Friends-only
This item will only be visible in searches to you, your friends, and admins.
The Crown of Leaves
Description Discussions7 Announcements12 Comments449 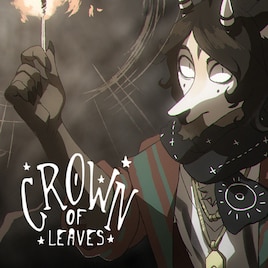 View The Crown of Leaves in the store

Hello there, guys! The demo-version of our game is waiting to be posted on Steam store page (just needed to be reviewed by Valve). Until then you can add our game to the wishlist. The "tutorial" is below.
The store page itself is still unavailable for the public, but we'll fix it soon!

Report on the new demo development:

- Added one new CG art in the scene between the lake and the greenhouse. Finished the animated background of the lake (it's panoramic now, you can find it in our gallery) and the bulletin board.
- Edited the parallax, it's looks good & smooth finally, and it's easier to take objects now.
- Added new ciphers screen with new mechanics of working, no errors found. The dialogue system became clearer, you can distinguish new, old and used speech lines now.
- New dialogues was added to the game to make the story deeper.
- You can craft things now!
- More items to collect.
_______

All that remain is to edit articles and the code. We keep on working. Thanks again, people, for your support, interest and patience.

Is it a otome/dating sim? No. Sorry to say but it is not. This is a game oriented around a fantasy storyline and it will be focusing on a plot as it slowly unravels around the actions chosen by the player. You will have the opportunity to date some of the characters within ‘Crown’ but there will be no sexual relations therein.

Roui (the protagonist) became a jeweler out of necessity to keep a roof over his head. In the past, he was obsessed with cryptograms, ciphers and riddles. That all changed however due to a series of dark events, prompting him to give up his hobbies and do away with them for good. One day, a prosperous, local Baron commissioned him for a bracelet, a gift for his lovely bride. Roui, in need of the extra coin, graciously accepted the order. Not long afterward, an unknown thief mysteriously stole away his jewelry blank. Yet another unknown individual showed up shortly after (known as the Stranger), telling Roui that the thief was none other then the Mad Rook, a legendary and mysterious ♥♥♥♥♥ spirit. This spirit, an entity that plays tricks on mortals once a year, possessed strange magic and a dark sense of humor. Roui had no choice - he decided to meet the Stranger personally to gather information and find the Mad Rook. Only then would he be able to get his bracelet back.
Despite of all the strangeness of the story, everyone could find something parallel to their everyday life and find themselves in one of the characters.
This story will capture you and won't let you go until the very end. Turn your mind inside out through a gothic and a twisted way!

Age 27, pure-blooded parba
A creative mind and a passionate young man, who is stuck in a place where he doesn't belong, working at a job he is not the least bit proud of. He is skeptical of magic and "magicians" in general. Personal quote: ""No, I don't believe in magic... And I hate paprika!"

Age 25, pure-blooded parba
An extremely, uh, “strange” girl who will be part of your- and Roui’s- story, but let’s not spoil anything!

Playing our game, you will be able too:
✦ Communicate with multiple characters, forge friendships, and make bitter enemies. Your words carry meaning and every piece of dialogue you speak will affect the story. Choose your words carefully. As the saying goes, "A word once spoken is past recalling".
✦ Decode ciphers!
✦ Collect strange items and use them to get yourself out of tight situations. Those items could be given as gifts for the characters you like, or used in magical stuff!
✦ Explore the world of Shang-La and meet unusual creatures, animals, spirits, and ghosts.
✦ Choose who you wish to become - the hero or the villain. But be prepared for the consequences, as neither choice comes without them.

In our game you will find:
✦ A mix of a visual novel and a point-and-click genre!
✦ Animated sprites
✦ An original, richly-crafted world with intriguing concepts
✦ Atmospheric OST
✦ A few episodes of the game
✦ Plot twists!
✦ A few different endings of the each episode

Where is it set?
The setting is a fictional world called Shang-La, a world of mixed cultures and eras, and a home to strange creatures. It’s a place of old magic and new ideas, where science works together with mysticism. You can find glasses and phones here, electricity and radio, but no guns or television. The inhabitants of this world still fight with swords, but already invented bicycles and cameras.
So yes, it’s a strange place. ;)

Who are the sahash?
Sahash are the second intelligent race in Shang-La, alongside humans. They are divided into five nations, differing from each other by their physicality and the shape of their horns and muzzles. Every nation has its own unique traditions and culture, ranging from habits, religion, law, and even tastes in fashion and food.
Despite the complicated relationships between these ethnic groups of sahash, as a whole they get along with humankind, and even try to emulate them in spite of their more animalistic nature.

We are a small team consist of 3 artists (Lins & Grimm aka Lingrimm and Natalie de Corsair) from Moscow, Russia that has been crafting our fantasy world of Shang-La for 5 years. The Crown of Leaves is not our first project and we are currently working on a comic book, and do small comic projects from time to time. The realm of game creation is new for us but we wish to learn more about it and create further projects down the road. This will help us share our ideas with those who take an interest in fantasy and share the same passion for it that we do.
We also have one more person in our crew, the amazingly talented Russian composer _Blacksmith_ [audiojungle.net] . He is writing original music for “Crown of Leaves”. It will be available for download here on Steam, if we pass Greenlight.

Thank you all for your support!
Popular Discussions View All (7)

shanephoenix Aug 11, 2017 @ 1:34pm
i really really love this game its so surreal and i hope its going to be free..because well i am kind of broke

Since the release of the demo, we decided to bring a full-fledged pont-n-click working system to the game. Next - we wanted to add more delightful cut scenes, character movements, interactions, locations and quests. We have already started it some time ago, and already finished the craft system and cipher mechanic, added new bg and menus.
But after summarising the amount of work, we realized that we will not be able to complete everything (we mean the whole game) until May. For this reason, the release of the game is officially postponed for the autumn/early winter of 2017.
PS: Please don't be sad about this, because you will be watching the development process via our twitter and other sites anyway and, of course, you will play an updated demo version of the game.

The Crown of Leaves has been Greenlit and is now listed in the Steam store. For the latest information, purchase options, and discussions for The Crown of Leaves, please see it on the Steam Store or in the Steam Community.
Visit Store Page
For more details Visit Community Hub
For latest discussions
If you really, really want to, you can continue to the Greenlight page. Information on this page may be out of date, since all the action has moved to the areas noted above.