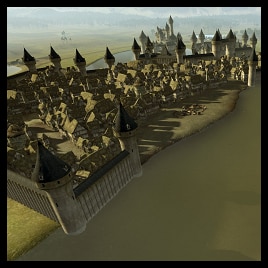 Girion
Offline
See all 10 collections (some may be hidden)

This item has been added to your Subscriptions. Some games will require you to relaunch them before the item will be downloaded.
Description
This map is made at maximum size allowing major battles. Among the seven lakes there are villages, a city, fields, hills and forests. The variety of the landscape should allow for interesting and epic battles.

The Fabled Seven Lakes lies in some of the most idyllic landscapes of Bretonnia; Knights Jousting while Ladies watch. The nobles hunting for game in the forests at day and hold grand balls in the castles at night. The cities prosper and the peasants are properly suppressed.

The Lakes divides the landscapes, making normal flanking more difficult. Rather you will have to make maneuvers around the lake to try and catch your opponent in the rear. With larger armies you can expect to have fights occurring at multiple places as you try to outflank each other. Several hills function as good positions for artillery, which can also be placed somewhere overlooking the lakes. Forests dots the outside of the map, perfect for vanguard deployments and ambushes.

The city is well made in detail, including smaller alleys and passage ways for heroes/ smaller units. It is centrally placed and will make for an interesting battle ground. And no, your not allowed to destroy the market.

Despite it's size and detail I have found no sign of performance problems.

(If you want to you can pay extra attention to the details. I have made sure to add doors to buildings that would have been missing them. Also check out the hand made Castle! If you find any clipping errors or such you can tell me and I will fix them!)

This map is also available in a siege version with different deployment zones:
http://steamcommunity.com/sharedfiles/filedetails/?id=864855951

Girion  [author] Apr 20, 2017 @ 11:58am
Just made revisions to all my maps. Nothing major but several details have been improved. I have added a few more AI hints, also the grass should look better on a few maps.

Girion  [author] Mar 30, 2017 @ 11:54am
Check out my latest map: Varenka Hills
http://steamcommunity.com/sharedfiles/filedetails/?id=894719859
Featuring a dwarven settlement built over several large hills with lots of tiers. There's also a large river crossed by 4 bridges. Otherwise the main focus of the map is the city, which covers most of it.

Girion  [author] Mar 19, 2017 @ 4:49pm
I have released another map: Assault on Heimseter. You know what to expect, large map, and extensive mountain range (were you can fight), a Norscan settlement and a large sea.

Girion  [author] Mar 10, 2017 @ 5:29am
Thank you. I can agree that some parts of the map is a bit booring, but overall I'm satisfied with it as an interesting map for field battles.

(unfortunatley Terry moved the map edges further in than displayed, the villages were supposed to be more central)

I hope to return to it and maybe make a few additions so it looks even nicer.

Thamas Rugin Mar 9, 2017 @ 12:04pm
This is a great lay-out and idea for a map. PAthfinding is solid and the simple yet elegent design works great for battles. I would say it needs more detail and finishing for immersion.

What I mean is: Reeds and bushes at the lakesides...posts/fences, small cottages, Waystones/torches/ etc at crossroads...all the litle detail that takes a long time, but really adds depth and beauty to a map.

pandom_ Feb 16, 2017 @ 4:12pm
This is just amazing.
The replayability of these battles are second to none. What these maps do for me is trigger those "Epic Battle moments".
These moments are the ones you have for all games. "Remember when we were holding down that fort against 3:1 odds, whilst your tired troops raced from a reinforce point?"
"Remember when your Gorebull shattered the Dawi lines as a last ditch attempt to break through the choke point?"
Thank you. To think we have so many more Armies and content ahead of us is exciting

I have remade the deployment zones of this, as well as my other two maps to allow to play them like sieges.

The city of Helmgrad guards the pass between the Empire and Bretonnia. You can fight in the 3 tiers of the city, on the field outside it. The mountain features small paths and lookout points that can prove valuable, especially in larger battles.