Store Page
Awesomenauts >  Workshop > Burkus's Workshop
This item has been removed from the community because it violates Steam Community & Content Guidelines. It is only visible to you. If you believe your item has been removed by mistake, please contact Steam Support.
This item is incompatible with Awesomenauts. Please see the instructions page for reasons why this item might not work within Awesomenauts.
Current visibility: Hidden
This item will only be visible to you, admins, and anyone marked as a creator.
Current visibility: Friends-only
This item will only be visible in searches to you, your friends, and admins. 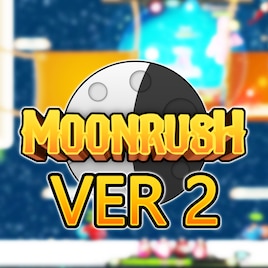 Burkus
Offline
See all 11 collections (some may be hidden)

This item has been added to your Subscriptions. Some games will require you to relaunch them before the item will be downloaded.
Description
Backstory
A solar shortage has swept the galaxy after many large vaults have been plundered. The Awesomenauts decide to spread out and search for an abundant new supply to prevent the economy collapsing. Admiral Swiggins, who found himself highly affected by the crisis, has pinpointed a promising candidate for mining, Sorona's own moon! Swiggins has deployed a transponder and signalled the other Awesomenauts. It's time for the Moonrush!

Features
• An optional top turret in front inspired by Starstorm that allows for intense chases.
• A bounce-pad above the top-back turret increases the pacing of matches.
• Both back turrets can be attacked from the start of the game!
• The bottom lane has a crushing piston instead of a front turret. When an Awesomenaut activates the button underneath, the piston will indiscriminately crush whatever is beneath after a short delay. The piston will zone off the bottom area for another few seconds before retracting. The piston is great for defending the turret, clearing waves, stopping a chasing enemy or cutting off someone's escape!
• Stealth areas in the centre of the map surround a health pack and solar. It is a dangerous but rewarding zone.
• Health is more difficult to "steal" on this map than others which gives the losing team more opportunity to come back.
• Difficult but rewarding coin drop.
• AI works fairly well on this map. Most of the time, the bots are as sensible as they usually are.
• Deathmatch support.
• Custom textures.
• Honorable mention in the level design contest (April 2017).

Crusher Instructions
1. Press button below either team's crusher.
2. Alarms will flash and in a few seconds the crusher will slam down.
3. The crusher will remain down for a couple of seconds.
4. After retracting, the crusher has a small cool-down period where a spinning symbol is shown on it. Once this disappears, you can use it again.

Feedback is much appreciated! Please leave a rating/favorite if you enjoyed the map :)
Popular Discussions View All (3)

Sryder Jun 24, 2017 @ 1:35pm
The area between the turrets top and bottom lane feels a bit cramped, and there is a lot of hide area in the middle of the map that can be abused.

UpgradetoMax Mar 25, 2017 @ 9:46pm
I actually didnt like the map when it had the normal textures but now its just awesome!

Paraakie Mar 11, 2017 @ 12:46pm
your map like many other now have a ribbit4 background pasted in to them, thanks to the latest patch, nothing wrong with it so might just keep, though I just point that out though
< >