Greenlight > Games > Racoon Games's Workshop
Greenlight is being retired. For more information on how to submit games to steam, refer to this blog post.
This item has been removed from the community because it violates Steam Community & Content Guidelines. It is only visible to you. If you believe your item has been removed by mistake, please contact Steam Support.
This item is incompatible with Greenlight. Please see the instructions page for reasons why this item might not work within Greenlight.
Current visibility: Hidden
This item will only be visible to you, admins, and anyone marked as a creator.
Current visibility: Friends-only
This item will only be visible in searches to you, your friends, and admins.
Nerds save the babes
Description Discussions1 Announcements1 Comments64

Racoon Games
Offline
See all 2 collections (some may be hidden)
Recent Announcements View All (1)
Nerds save the Babes
February 6, 2017 - Racoon Games

Hi, we would like to present to you Greenlight guys our game "Nerds save the Babes", a cartoony crazy shooter where in a game company something went terribly wrong. All men have vanished-- except the coders. That leaves the coders alone in a company building with thousands of game monsters that for some mysterious reason have come to iife, and hundreds of beautiful women.

Read More
Description
Release date: Late 2017
We are a small indie team building a game. We are making games, having fun whilst being a bit dorky.
Nerds is a parody about other games. A Oldschool isometric Shooter with many gags and jokes.

It all started one day in the office of the infamous game company Racoon Games-- the handsome and talented coder Rupert looked at his computerscreen and a message popped up: "Shall we play a game?"

You don`t have to ask Rupert a question like that twice.

He typed "Yess!!!!" into the console and then something went very wrong in the server room.

A big flash, a loud noise--- and something truly evil forced it's way into our world and eliminated all the male game designers and male artists. Yeah, right--- they vanished without a trace. Very mysterious.

So suddenly Rupert found himself and his fellow coder Roscoe being the only males left in the company--- the only males alone with dozens of female interns, game designers and secretaries!
Whew!

As if this were not enough all of a sudden the game monsters from the games came alive, jumped out of the computers and started to hunt and kidnap his female co- workers.

So Rupert acted as a responsible citizen and decided that it was time to SAVE THE BABES!

That`s how it all began--- and since that time he is trying his best to do exactly that---- but he could use some help by a shrewd and ruthless gamer like you.
To help him fight the ever growing army of game monsters from all kinds of game genres, to find the babes and to escort them into safety.
Are you up to the task?

Can -- NERDS save the BABES? 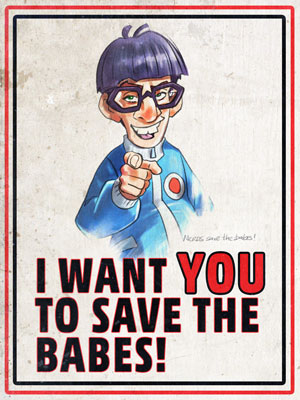 You are Rupert, a coder from Racoon Game studios and survivor of the server apocalypse.
Your task is to fight your way through the different levels of the game company building, terminate the creatures from the games that became alive somehow and find and save all the babes, then bring them to safety. Every level has it's own unique masses of monsters, bosses and challenges. Clean the levels with clever selection and use of your weapons and utilities. Will you be able to SAVE THE BABES?

Who are you?
We are in core 2 people who love games. Both of us are working professionally in the media industry and are generalists with at least one area of expertise.
Bilgin is a professional coder, game designer, author with additional experience in webdesign, sounddesign and 3d content creation, Oliver is a professional commercial artist, storyboarder and animator with long time 3d experience who also has understanding of coding and sound engineering.

We both have networks of talented collegues that we will make use of as soon as we get into Early Access to speed up the production.

What do you have already?
We have a working prototype and the custom models for the office set and one level of enemies.
We also have tons of ideas filed and a load of concept art.
Right now the gameplay of the prototype needs to be balanced and sounddesign and FX are not yet addressed properly, but the game is already fun to play though it needs more funny dialog and other funny stuff that has not been implemented yet.

Will you go into Early Access or launch straight on Steam after Greenlight?
The game will be launched as Early Access after the Steam Greenlight. The focus of Early Access will be balancing an tweaking the gameplay and designing and adding new enemies, levels and funny and crazy ideas.
We will start Early Access as soon as we are satisfied with the first level and then use your highly appreciated feedback and ideas to improve and advance the game.
As soon as we have reached a satisfying game play and a satisfying game play time and level count the game can be released.

What can I do to contribute?
We need you to save the babes! We will collect and analyze all your feedback and crazy ideas and when they fit with our vison and does not conflict with legal stuff there is a fat chance of them making it into the game.

When do you plan to go into Early Access?
As soon as we have a Greenlight and after we are satisfied with the gameplay of the level we can release it on Early Access and look forward to your input. Early Access Builds will be released Chapterwise.

Do you have plans for additional content?
Yes, but we are currently concentrating on preparing "NERDS save the BABES" for Early Access.

What is your business model?
The game will be premium on PC. No pay to win BS, you will have to work the same as anybody else to save the babes. You will get all the content and all the fun for a small price that we haven’t decided yet.

Can I help to make the game more awesome?
YES, your contribution is highly appreciated! Play the game, be engaged in the forums, talk about us on facebook and twitter , tell us what you like or dislike, and tell us what fun stuff you would like to see in the upcoming levels. We really want your input. 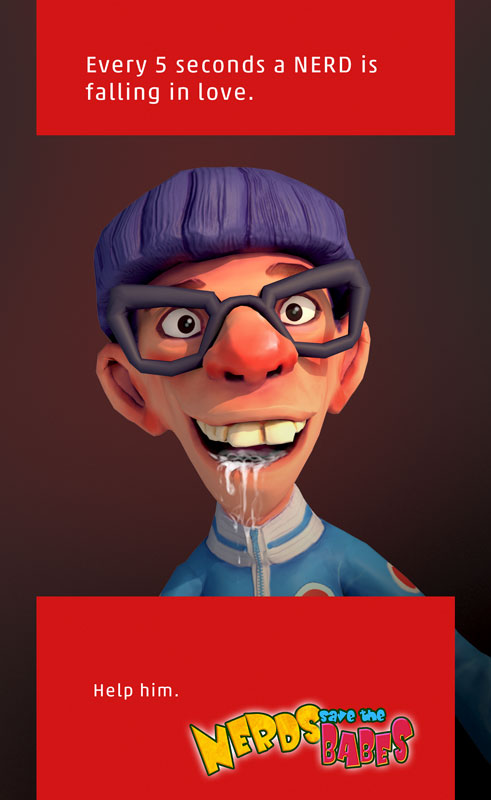 CHECK OUT A INTERVIEW @ GAMETYRANT

What would you like to see in a game like "Nerds save the babes"?
Racoon Games
< >
64 Comments

Racoon Games  [author] Mar 17, 2017 @ 5:19pm
Wonderful! Greenlit! Thank you all for your support, input and critical remarks. We will keep that all in mind when we do the next iteration of the game.