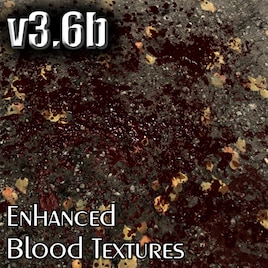 BakaKemono
Offline
See all 14929 collections (some may be hidden)

This item has been added to your Subscriptions. Some games will require you to relaunch them before the item will be downloaded.
Description
A blood overhaul mod

!!!!! WARNING !!!!!
Steam version of the mod is unsupported and is now outdated because of a bug with Steam account not syncing with Bethesda's Creation Kit.

NEW VERSION HERE:
https://steamcommunity.com/sharedfiles/filedetails/?id=1720679049
You need to make a "clean save" to use the new version. Uninstall the mod by following the instructions, load your game without the mod installed, save, then install the new version.

Optional files: (Found only on the Nexus version)
-Smaller blood splatter, wound size, and amount
-Darker or brighter blood color for use with all lighting mods
-No screen blood and blurry screen blood optional files

Please read the FAQ first before posting issues. You will most likely find answers there so you don't have to wait for a reply.

DLC Patches?
I am not allowed to post a separate download link to the patches on this Steam page(links get removed). You will need to download the file from Nexus and just move the DLC patch to your Skyrim folder. Patches are for 3.6c and will work with the current version here on Steam. I am unable to update the mod at this time.

You need Skyui and SKSE to use the MCM options. It is NOT required for the mod to work.

If you are not getting any blood you may need to make the decal amount graphics option higher. It is found in the Skyrim Launcher options.

This is not compatible with other blood mods. Expect gamesave bloat and crashes if you continue to use conflicting mods.

Use only one Compatibility patch!

-Go to an indoor area where there are no blood splatters anywhere. If there is blood in the area previously you should first fast travel somewhere else. (If this is not done you may crash when the mod is uninstalled)
-Open console using the ~ key, and type the following:
stopquest zGoreEffectsPlayerQuest
pcb

If you have SkyUI you can just click the uninstall button in the MCM menu instead of typing in the commands on the top.

BakaKemono  [author] Jul 10, 2019 @ 3:34pm
Yea I'm not sure if the mod gets removed that it will also remove it from subscriber's game which can cause the game to crash.

You only need to do that if you created a save with this version installed.

SparksKitsune Jul 10, 2019 @ 2:29pm
Well, would probably help to warn in advance before removing so I can update my game with your newer version. If you decide to remove this older version, of course. I probably should do the uninstall steps you listed here and on 3.8 ASAP.

SparksKitsune Jul 9, 2019 @ 3:03pm
Will you be removing this outdated version anytime soon?