Store Page
Tabletop Simulator >  Workshop > Trips's Workshop
This item has been removed from the community because it violates Steam Community & Content Guidelines. It is only visible to you. If you believe your item has been removed by mistake, please contact Steam Support.
This item is incompatible with Tabletop Simulator. Please see the instructions page for reasons why this item might not work within Tabletop Simulator.
Current visibility: Hidden
This item will only be visible to you, admins, and anyone marked as a creator.
Current visibility: Friends-only
This item will only be visible in searches to you, your friends, and admins. 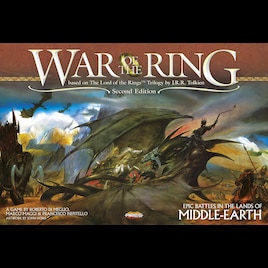 Trips
Offline
See all 85 collections (some may be hidden)

This item has been added to your Subscriptions. Some games will require you to relaunch them before the item will be downloaded.
Description
The War of The Ring is a grand strategy board game that allows its players to immerse themselves in the world of J.R.R. Tolkien's The Lord of The Rings and experience its epic action, dramatic conflict, and memorable characters. As the Free Peoples player you command the proud hosts of the most important kingdoms of the Third Age. From the horse-lords of Rohan to the soldiers of Gondor and the Elven lords of Rivendell, you lead the defense of the last free realms of Middle-earth. Face the evil minions of Sauron on the field of battle in a desperate attempt to delay their onslaught, while you lead the Fellowship of the Ring in the Quest for Mount Doom. As the Shadow player you lead the hordes of the Dark Lord and his most powerful minions as they try to bring darkness to Middle-earth. Legions of Orcs, Trolls, Wolfriders and the dreadful Ringwraiths await your command. Hunt the Ring-bearer and bring the precious Ring to his Master, or crush your enemies with your unstoppable armies. This is your chance to forge the destiny of an age.

Notes
Instead of figures or standups this mods has wooden pieces to represent the armies and the characters. Regular units are represented by small wooden discs, elite units by large discs and leaders by cylinders. The characters and Nazgûl are represented by blocks with the character portraits on them. The Free Peoples blocks have a light gray color and the Shadow character blocks are black. The Ring-bearers block is of a slightly darker shade of gray.

The nation affiliation of the armies can be seen from the color of the pieces. The differences in the symbols and naming of a single nation's army pieces are just for thematic flavor, and can be changed by switching the states of the pieces. The symbols on the army pieces are from the Rise of Mordor Total War mod.
The expansion content is on the table extensions. The base game cards that need to be removed when shuffling in the expansion cards are on the event decks face side up. The table extensions are by Demian.

The collection used this priority system:

Please also note that a mod that makes selection for this list very well could be one in which the mod author borrowed the majority of assets from another workshop listing, so full thanks to all who worked on a mod.

Thanks for your hard work!

goodgamepat Mar 21, 2020 @ 11:52pm
This is beautiful work, really well done. For future downloaders: switch the naming of the political counters for the Dwarves and The North. Great job otherwise!