Greenlight > Games > Braschendorf's Workshop
Greenlight is being retired. For more information on how to submit games to steam, refer to this blog post.
This item has been removed from the community because it violates Steam Community & Content Guidelines. It is only visible to you. If you believe your item has been removed by mistake, please contact Steam Support.
This item is incompatible with Greenlight. Please see the instructions page for reasons why this item might not work within Greenlight.
Current visibility: Hidden
This item will only be visible to you, admins, and anyone marked as a creator.
Current visibility: Friends-only
This item will only be visible in searches to you, your friends, and admins.
Robot Farm
Description Discussions0 Announcements4 Comments50 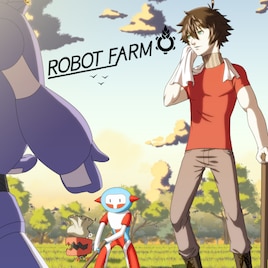 We're just letting you know that we're still hard at work on Robot Farm. We have a bad habit of being sort of hush hush when we're deep into development, and we'll try and be better about it. So far, we've been able to address almost all of the feedback we got from you all during the Greenlight process. In fact, I have some exciting news.

First of all, here is a bit of a changelog of what we've done so far. A lot of it is based on the feedback in the comments, others are based on internal testing feedback. These are just the highlights, there's a lot more stuff we've been doing under the hood as well:

-Added bindable shortcut buttons for most menus
-We've made the UI more responsive/customizable
-We're currently working on making the combat system flashier and more interesting
-The world generator is being overhauled to allow for more interesting landscapes and structures. Please be excited about this, it's going to be awesome.
-The world is being graphically fleshed out with dynamic god rays, clouds, windiness, world shadows, house shadows, and we're looking into dynamic sprite shadows
-The fishing minigame is being overhauled to provide a more interesting fishing experience
-The main story has been improved to require the player to explore all of the features of the game in a steady manner
-We've improved the games tutorial to be more welcoming to new players and not overwhelming
-Many miscellaneous bugfixes and improvements

Now for the "exciting news" part. We've decided to go ahead and add the female playable character to the first public build of the game, so it won't be a post-release free DLC, but rather packed into the game from the get-go. We plan on adding special dialogue for both genders, so there will be more replayability when you try out both. During the Greenlight process we noticed a lot of people seemed interested in playing as Lena (the female character), so we're all pitching in to fund the assets needed to finish her campaign. We hope you guys like it!

We're going to do our best to make Robot Farm the best it can be, and that wouldn't have been possible without your feedback. So thanks a lot guys!

Once all of this is in a presentable state, we plan on making new videos for our YouTube channel to showcase more of Robot Farms features and what it's all about. So please subscribe to us and look forward to that as well.

Again, thank you for your interest in our game!! Take care!

Read More
Description
Release date: 2017
In a world where everyone has forgotten what they are, you and your team of “Aokobots” must prepare to fight a dangerous threat that will arrive in one year. To achieve this goal, you will need adventuring supplies, and to afford adventuring supplies, you must build a “Robot Farm,” a farm run by Aokobots that are guided by your hand. Once the farm is stable and bringing in a recurring income, you must set out and travel the world - meeting the seven remaining “Engineers” and reawakening your true potential as an Aokobot Operator. Only then will you be able to face this threat when it arrives on the final day.

Farm together. Adventure together. Fight together. Decide your story!

Please keep in mind that all footage and screenshots are still a Work-In-Progress - we intend to improve the graphics and add more detail as we go. We'd say that the game is roughly 60-70% complete at this point.

Braschendorf  [author] Feb 10, 2017 @ 11:38am
I'll definitely consider setting up a custom font system! I've never heard that idea before, but I've always been a fan of making UI customizable. And thanks again, really! It makes us happy that people care enough to give us detailed thoughts and feedback on what they think we can improve on. We'll do our best to not let you down!

|$m0k!n|-life of bRYAN Feb 10, 2017 @ 4:09am
Fair point with the UI, you should not cannot change things every time you get a suggestion. I think a nicer font could be used though, I often wish games would offer a font selection!

One thing to consider with the UI is streamers, turning off the UI or moving it can be useful for them.

I will check back and always happy to give feedback.

Braschendorf  [author] Feb 9, 2017 @ 9:25pm
Thanks Bryan! We've already made a todo list of graphics stuff and have gotten a new artist on it. As for the UI, we're leaving it as it is as we're not personally fans of pixely UIs. And as for the 3D parts - they're story-relevant, but from here on out, we're definitely going to take your advice and show them a lot less to prevent confusing people. And no worries! All feedback is good feedback.

|$m0k!n|-life of bRYAN Feb 7, 2017 @ 4:13pm
Looks promising, you could really benefit by hiring a pixel artist and maybe a designer to help clean up the art work, I feel you are lacking a little consistency. The game art is pixels, the pop up chat characters looks like vector for example.

Your UI could do with some work, a great example of a game with a neat pixel interface is "The Escapist" http://store.steampowered.com/app/298630/

Not sure why you have the life like sea in your trailer / intro screen? If I was to see that thumbnail I would have no clue what your game was about.

Anyway I wish you luck and hope my comments are taken as advice and not negative feedback.