Store Page
Wallpaper Engine>  Workshop > Butz Yung's Workshop
This item has been removed from the community because it violates Steam Community & Content Guidelines. It is only visible to you. If you believe your item has been removed by mistake, please contact Steam Support.
This item is incompatible with Wallpaper Engine. Please see the instructions page for reasons why this item might not work within Wallpaper Engine.
Current visibility: Hidden
This item will only be visible to you, admins, and anyone marked as a creator.
Current visibility: Friends-only
This item will only be visible in searches to you, your friends, and admins. 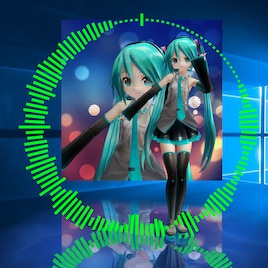 This item has been added to your Subscriptions. Some games will require you to relaunch them before the item will be downloaded.
In 1 collection by Butz Yung
System Animator

9 items
Description
"System Animator" is a multi-purpose system monitor with focus on visuals and FUN! How about a cute Anime gal who dances according to the CPU usage? Hatsune Miku waving her leek while playing a MP3? The famous Matrix digital rain effect with scroll speed corresponding to your network traffic? It's up to your imagination!

Various kind of 2D/3D animations are supported, including real-time MikuMikuDance (MMD) animation support. Imagine a Miku who will respond to your mouse actions, and dance to the beats when you play a music!

Below are some videos demonstrating some of the key features in System Animator.
https://youtu.be/lQGCHMNJeXs?list=PLLpwhHMvOCSvSDkjXk_jwsf59kQaHpOX_

- Only the wallpaper mode is available (i.e. you can't use it as a detached window).

- Some animations are still mouse-interactable, unlike the wallpaper mode in standalone version which totally ignores mouse clicks. Normal click works like double click in some cases.

- Drop-down menu on the settings panel doesn't work in the usual way. Simply click to change.

- Animation is basically centered no matter the size (mainly because window can't be resized and repositioned in Wallpaper Engine mode).

- Some actions which require keyboard inputs are not supported.

- Launch "electron.exe" to run System Animator in standalone mode. Any changes are saved and applied for both standalone and Wallpaper Engine modes. This can be useful in some cases when some changes can't be done in Wallpaper Engine due to the above technical limitations.

IMPORTANT NOTE: Some anti-virus programs may have false alarms regarding some of the files used in System Animator. System Animator is clean and safe with NO virus or trojan of any kind.

- Add support for moving the gadget window beyond the primary screen size and possibly across multiple monitors.

- Update the double-click function of MMD animation to include a short "gravity reset" / "random wind" effect.

- Fix the repeating of texture when its dimension is non-power-of-two.

- Fix the render depth of speech bubbles and mirrors (in some cases) in MMD animations.

- Fix a bug when loading more than 3 MMD character models.

- Fix a bug when using MMD model with no rigid body.

- Fix a bug in canvas fireworks effect which causes the animation to flash sometimes.

Craylobster Jun 23, 2018 @ 6:53am
when i load it, it just gets stuckl on the half way point of the loading bar
any reasons why this would happen?

1. Animation changed via drag-n-drop (or using the settings panel) is saved, and it will be loaded every time the wallpaper restarts.

2. Changing animation via the settings panel is the same as drag-n-drop.

HoloRocker Oct 9, 2017 @ 4:38pm
This app looks amazing! It took me a while to get it running, though.
I've only got a few problems/questions left:
1. How do I save a custom model/animation so that I don't have to use the drop down option every time I start the app? I've only seen tutorials of doing this in the previous versions.
2. Does choosing an animation folder in the settings do something? If it does, what structure would such a folder require? I tried selecting a folder which contains other MMD model folders, as well as a folder with an MMD model directly, but it wouldn't change anything.
3. The Wallpaper Engine version is limited to one animation at a time?
Lastly, should I switch to the standalone version? The WE workshop addon seems to have quite a few missing functions, and I'm not a sucker for the ability to rotate the model with my mouse.
< >