Store Page
RimWorld>  Workshop > LaZy Me's Workshop
This item has been removed from the community because it violates Steam Community & Content Guidelines. It is only visible to you. If you believe your item has been removed by mistake, please contact Steam Support.
This item is incompatible with RimWorld. Please see the instructions page for reasons why this item might not work within RimWorld.
Current visibility: Hidden
This item will only be visible to you, admins, and anyone marked as a creator.
Current visibility: Friends-only
This item will only be visible in searches to you, your friends, and admins. 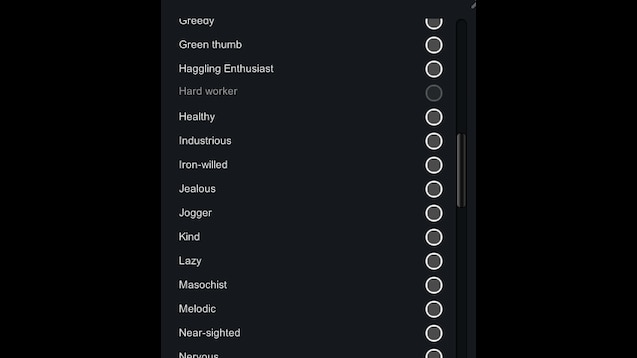 LaZy Me
Offline
See all 124 collections (some may be hidden)

This item has been added to your Subscriptions. Some games will require you to relaunch them before the item will be downloaded.
Description
Swenzi has updated the mod to A17, and can be found here:
http://steamcommunity.com/sharedfiles/filedetails/?id=946944965


This mod adds many new traits to the game. May conflict with mods that modify traits or thoughts.

Have you ever felt that there aren't enough traits to immersify your game-play? Well, I've got just the mod for you with Additional Traits!

Ver 1.0 Traits:
Confident: These pawns are more personable and have an increased break threshold
Overweight: Works slower, walks slower.
Athletic: Works quicker, walks quicker, aims a little better.
Dextrous: Shorter trigger-pull delay, quicker worker. Good with crafts or arts.
Perceptive: Improves accuracy.
Clean: Healing quality goes up, and food prepared by these people have a reduced chance of being poisonous at the cost of some work speed.
Near-sighted: Less accurate.
Quick-learner: Learns quicker than the average person.
Glutton: Eats quicker than the average person.
Healthy: Recovers quicker from illness than the average person.
Persuasive: Gets the edge in social performance (Trading, recruitment, etc.)
Sucker: Gets suckered into selling for less, and buying for more.
Amateur haggler: Gets slightly cheaper prices and sells for slightly higher.
Haggling enthusiast: Gets much cheaper prices and sells for a lot more.
Awkward: Fumbles through social interactions.
Tucker: These pawns will, uh, tuck you in at night. Bow chicka bow wow.
Melodic: People love interacting with someone with a melodic voice.
Uncouth diplomat: Other factions don't like receiving gifts from such an... uncouth person.
Diplomatic: Gets a little more bang for his buck.
Very diplomatic: Knows how to ease tension between factions with some Ag grease.
Shooting amateur:Terrible at shooting. I really wouldn't give this guy a gun.
Shooting enthusiast: This sharpshooter is worth his salt.
Shooting professional: Rimworld Space Marines!

Ver 1.1 Traits:
Cold-hearted: Lacks empathy, but more or less blends in with society.
Pervert: Unaffected by nudity or sharing a bedroom with strangers. Creepy.
Heavy sleeper: Unaffected by people stomping around next to them while they're sleeping.
Introducing THOUGHTS! Some traits now include mood and relationship impacting effects for increased immersion! It'll take a lot of work for someone to like that pervert.

An archived version with heroic and godly traits can be found here: http://steamcommunity.com/sharedfiles/filedetails/?id=851164051

V 2.2:
New spectrum traits! Commonality of spectrum traits rebalanced to be more infrequent.
Uncoordinated: NAME can work under normal conditions just fine, but throw HIM onto a battlefield and HE becomes an uncoordinated mess.
Warrior-in-training: NAME is practiced with melee weapons.
Trained warrior: NAME is one with his weapon, using it like an extension of his own arm.

Thelockenessmonster Sep 3, 2018 @ 3:32am
is there going to be a b19 update anytime soon or are you leaving that to Swenzi?

LaZy Me  [author] Jun 24, 2017 @ 4:56am
Regarding heoric and godly traits: I think many people would appreciate it, Swenzi! I'll update the page on Ludeon with your update, and have a link set here as well. Thanks!

I was wondering if I could have permission to also update your heroic and godly traits mod?
Also if you would like the to update this mod to A17, I can send you the code I modified so you can host it on this page and the forum.

BlueTressym May 29, 2017 @ 2:39pm
I second the previous comment. I like this mod a lot, so I'm sorry to hear you aren't planning to update it. I hope you will reconsider, once you are able, but if not, I hope you will be willing to let someone else take it on, as it would be a shame to let this fall by the wayside. There are a few mods out there offering extra traits, but this is the only one I like. Take Care.

Dr. Blackburne May 21, 2017 @ 7:18pm
Gewen, there is a mod that stops debuffs from prisioner harvesting, and one from Slave selling(removes mood) And is incompatible with this mod. How could I fix this? Or what could be causing this ( The mods are both made by GassyTaco)
< >