Store Page
Cities: Skylines>  Workshop > Judazzz's Workshop
This item has been removed from the community because it violates Steam Community & Content Guidelines. It is only visible to you. If you believe your item has been removed by mistake, please contact Steam Support.
This item is incompatible with Cities: Skylines. Please see the instructions page for reasons why this item might not work within Cities: Skylines.
Current visibility: Hidden
This item will only be visible to you, admins, and anyone marked as a creator.
Current visibility: Friends-only
This item will only be visible in searches to you, your friends, and admins. 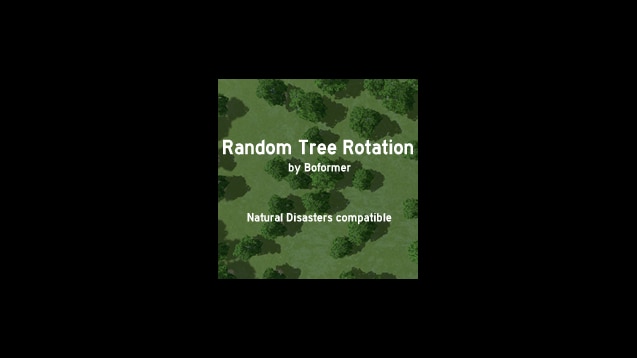 boformer
Online
See all 5656 collections (some may be hidden)

This item has been added to your Subscriptions. Some games will require you to relaunch them before the item will be downloaded.
Description
Hey all,

many of you may have noticed that ever since the release of Natural Disasters (C:SL version 1.6) Boformer's Random Tree Rotation mod no longer worked properly: trees disappeared when viewed from certain angles, and textures were flickering wildly. And as we all know, when trees disappear and textures flicker, you're gonna have a bad time!
So I decided to take a peek in the mod's source code, and it turned out that the fix was a very simple one: one of the methods called by the mod was renamed by CO, which lead to the erratic behavior described above. After fixing the method call, the mod seems to be working as new again.

Full credit for the mod obviously goes to Boformer: all I did was renaming one method, a 'feat' a Chimp with a laptop and Visual Studio probably could have pulled off just as well :P


So if rotating trees is your thing, sub now and enjoy!!!


NOTE 1: I initially fixed the code solely for my own amusement, but since this is such a popular (and for many players vital) mod, I felt I had to share the fun with you guys. I haven't tested the mod on anything but my own computer with my own mod collection, so I cannot guarantee the fix will work for everyone. This means that usage is at your own risk.

NOTE 2: this mod is as-is. Feel free to try it out, but I am not offering support except for the most critical of errors. Nor am I going to add or change any functionality - after all, this is and will always remain Boformer's work.

NOTE 3: probably needless to say, but if you're going to use this mod, un-sub from the original version, or in the very least disable it in-game (if you haven't done so already).

NOTE 4: unfortunately, for various players this mod is still causing vanilla trees to flicker wildly when zooming out. I'm not actively trying to fix this issue, because this mod doesn't really have my priority, but any bit of info is still welcome, as it may bring me closer to a solution. In other words, this mod is currently put on ice, but it's not completely abandoned!

My pet named steve velk.ca Feb 13 @ 4:11pm
Problem is. My cars my props my decals parts of the road and road trees parts of building are all flickering or vanishing when i zoom in

One_blue_glove Jan 27 @ 7:16pm
Thank you, Finwickle! Also, I totally agree DragonWolf; for steam games with large modding communities, the workshop can turn into a wasteland of dead mods and dead mods that were specifically made to update the first dead mods and so on. I wish the workshop were more optimized for mods that require constant updates etc. as they do in the C:S workshop

Şnorkl℮ Jan 26, 2019 @ 2:55am
the reason the trees flicker isnt because of switching between lods from what I can see. Im getting the flickering, its because certain trees have variants they switch between when placed. So one tree might have different sizes and it also has different shades of leaves it can possibly spawn with, so when u put that tree down 10 times in a row some are dark and some are light. Whats happening is that when viewed at a distance its constantly flickering through the different versions of the tree that can spawn when u place it, and because some have lighter leaves than others, it seems to flicker between dark and light. Thats whats going on, its not flickering between a low detail distance model and an up close model.

Dunno if thats helpful but just throwing it out there in case it helps.

ChrisThePhoenix Dec 24, 2018 @ 7:01pm
Finwickle thanks for the info, the other does have newer update than this one

DragonWolf5589 Oct 17, 2018 @ 1:50pm
thanks finwickle, its been bugging me for a while this one! (I wish steam had a thing to say which versions they are compatible with, theres a LOT that never work anymore and its getting messy on the site.

baronjutter Jun 16, 2018 @ 12:38pm
I was always told that the flickering only happened with vanilla trees, but it seems any workshop tree attached to a building does it too. Used a tree-replacer mod but any lot-based tree will flicker. Such an odd problem. Random rotation should be part of the vanilla game!
< >