Store Page
rFactor 2>  Workshop > simtek's Workshop
This item has been removed from the community because it violates Steam Community & Content Guidelines. It is only visible to you. If you believe your item has been removed by mistake, please contact Steam Support.
This item is incompatible with rFactor 2. Please see the instructions page for reasons why this item might not work within rFactor 2.
Current visibility: Hidden
This item will only be visible to you, admins, and anyone marked as a creator.
Current visibility: Friends-only
This item will only be visible in searches to you, your friends, and admins. 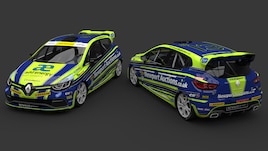 simtek
Offline
See all 93 collections (some may be hidden)

This item has been added to your Subscriptions. Some games will require you to relaunch them before the item will be downloaded.
Description
If you support my work please: paypal.me/gpfan

Possessing all the qualities of its predecessor, the Renault Clio Renault sport 200 EDC, the Clio Cup rewrites the rules when it comes to a hothatch development series. Having brought this competition class into the world nearly 50 years ago , Renault Sport Racing has drawn on it’s know-how and expertise in creating a modern, high-performance and economical car that is accessible for track-day enthusiasts.

Replacing the model in use since 2007, the Clio Cup has inherited all the assets of the Clio Renault Sport 200 EDC , starting with its chassis. Reinforced by a welded roll cage, the monocoque chassis delivers increased safety and is stronger too. Enhanced by 17-inch rims, the design of the Clio Cup takes the breath away and is complemented by aerodynamics that make it handle even better on the track.

Renault Sport Racing’ engineers have put all their brain power into the 1.6L directinjected turbo engine, which produces 220bhp and a constant torque of 270Nm, and is hooked up to a six-speed sequential gearbox enabling gear shifts to be made in just 100 milliseconds. Steering-wheel paddle shifts are available as an option, along with the classic gearstick.

- Based on the old rFactor Clio Cup 2013
- Conversion made by Simtek (physics, sounds)
- Skin pack made by jsmee
- Original work by eddy3spain

faheed alwan vin diesel de 43rd Oct 28, 2019 @ 1:42pm
even though its an old mod, it doesn't fail to capture the exact realism of the UK Cup cars from the schemes all the way down to the sponsors.