Greenlight > Games > Imperium42's Workshop
Greenlight is being retired. For more information on how to submit games to steam, refer to this blog post.
This item has been removed from the community because it violates Steam Community & Content Guidelines. It is only visible to you. If you believe your item has been removed by mistake, please contact Steam Support.
This item is incompatible with Greenlight. Please see the instructions page for reasons why this item might not work within Greenlight.
Current visibility: Hidden
This item will only be visible to you, admins, and anyone marked as a creator.
Current visibility: Friends-only
This item will only be visible in searches to you, your friends, and admins.
Throne of Lies ♔ The Online Game of Deceit
Description Discussions3 Announcements10 Comments100 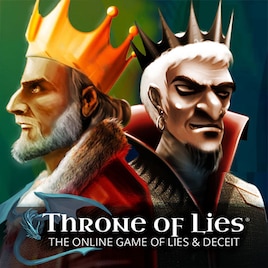 arnenzo_0
Offline
See all 7 collections (some may be hidden)
Kickstarter

2. Pre-order's for a limited time now come with FREE Alpha/Beta access! You can pre-order now for only $9.99 on our official site @ https://www.ThroneOfLies.com

See you in the Discord #looking-for-game channel!

Time flies; it's been weeks after Throne of Lies Game funded on Kickstarter[ks.throneoflies.com].
Thank you again for supporting us reach the goal!

For March, our team is coding full-time & busy preparing to deliver the rewards.
Everything is going well so far, and we later realized we are fast on delivering our game/rewards comparing with other Kickstarter projects, hahaha... But we know some of you have been with us from the very beginning - so we want to make the wait shorter.

All the physical rewards will be sent out before end of March.
You may received it at the beginning of April :)

Here is the new teaser for our Alpha!!

Alpha is just an beginning; we are looking to improve the game for beta and go further with your feedback. For Alpha users, you may to play with some of our bugs haha but it should hopefully be stable!~

Meanwhile, join us on our Discord to share you insights & ideas! https://discord.gg/gvNbRSB

Throne of Lies-- a game which you may betray/tease your friends, make death-time fun, hand-drawn Deathnotes to troll the living, and even convert the good/bad with 35+ classes and 4 factions. Throne of Lies is a 3D, online-multiplayer social deduction game with matchmaking, inspired by tabletop, medieval politics and the Werewolf/Mafia genre in a medieval setting.

In a game of betrayal and underhanded tactics, who will emerge as the victor?

Your objective is simple: “Discover out who you can trust, dispose of the rest. Welcome to the ultimate game of survival! ”

Tired of all kinds of games that seem all too similar? Looking for a game to play with either friends or solo while at home? Enjoy online games, but sick of elf cities in every game you play? Throne of Lies -- an online social deduction game with matchmaking, where every experience is unique -- was made for you!

Throne of Lies: The Online Game of Deceit is a 3D, online-multiplayer social deduction game, inspired by medieval politics and the Werewolf/Mafia genre in a medieval setting.

The overall game will pit two main factions against each other (Blue Dragon vs. Black Rose). Players will be randomly assigned to either. No one knows who’s who at the start. Alliances will be made, assassinations will occur, secret meetings will take place, lies will be told -- and voting to execute those accused of treason will make every game session a new and unique experience.

You will be deceived many times, but there are actions you can take to help deduce who is or is not on your side. Use your abilities and social deduction skills to stay alive and win!

By design, Throne of Lies will have high replayability. You can play more than 1,000 game sessions, and you'll still get a very new and unique experience each game.

The game will be available on Steam for PC (eventually for Mac & Linux), and is being developed on Unity3D.

(The Alchemist class at night -- "Hmm... I should heal this player--Nope! Poison for you!")

There are 7-16 players per game session. A class is randomly assigned to each player. Membership to a team (one of 4 factions) -- either Blue Dragon, Black Rose, Neutral, or The Cult -- is also assigned to each player. There are a series of Day and Night rounds; each round allows only a short duration of time for players to make split-second decisions -- based on deductive clues obtained from the players’ special abilities and the social aspect of the game.

Each round has Day and Night timed phases. Any time within the Day period, players may vote to determine if a player is guilty of treason (a crime generally punishable by death). If the majority votes a player guilty, the accused player will be executed by the first person who accused them of treason. There are special execution effects tied to the accuser’s equipped weapon (a fire weapon would set the executed on fire, for example).

Outside of execution votes and trials during the Day phase, players will also have limited time to chat -- where they would gather and share evidence to decide who is or isn’t suspicious and decide who to slay or defend during the following Night phase.

Day phase: everyone meets in the Throne room. Players discuss and learn about what happened at Night -- such as who has been murdered, among other things. Players will then get together to cast their votes to execute a player. Being enemy factions, a Blue Dragon member would want to get rid of a Black Rose member, and vice versa. There will be times where a player may wrongly vote to execute an innocent person (or someone who was actually on the player’s side) for treason, by wrongly assuming they were guilty. Players can lie, act innocent, and blame others to try to trick everyone into voting someone they want gone.

Night phase: players retreat to their class-specific rooms. They may kill in the darkness or be part of others’ foul play. Different classes will have distinct abilities and intentions at Night. Some players can meet at Night, share secret plans, assassinate, spy, use special Night abilities, and more.

You can write in your journal to keep track of what happens during each Day -- such as who was killed or with whom a player has interacted.

+ Tricky: Your deduction skills are more useful than your 100+ class abilities.

+ Twisting: "Recruiting" and "Converting" systems to release an alter-self (We don't want to say "the dark side!).

+ Opportunity: "King" and "Royalty" system: Rise up to inherit the Throne when the King is killed.

+ Death is not the end: Death/ghost system with mini game. One may return or speak with the living!

+ Customized: Earn traditional, full skins -- but also claim new weapons, armor, and even auras. Only aesthetic unlocks (No pay-2-win here). Customize your character model -- it's not linked with your class!

+ Stylish Justice: Execution abilities are dependent on your currently-equipped weapon.

+ Be the writer: Every move contributes to the game's next move -- causing a ripple effect.

+ Be creative: Taunt your enemies by drawing "Deathnotes" to leave with their body -- drawn with blood and ink.

+ Practice, Practice, Practice: The art of perception knows no boundaries. Become a better negotiator, improve at convincing others, and get better at deducting situations that involve investigation and clues.

+ Be cool: Hang out and lay back at home while playing a social deduction game!

If you missed both "Veteran Status" and our "Kickstarter", you'll have to wait until after alpha/beta~ we'll probably have pre-orders later for a small bonus.