Greenlight > Games > Orion_'s Workshop
Greenlight is being retired. For more information on how to submit games to steam, refer to this blog post.
This item has been removed from the community because it violates Steam Community & Content Guidelines. It is only visible to you. If you believe your item has been removed by mistake, please contact Steam Support.
This item is incompatible with Greenlight. Please see the instructions page for reasons why this item might not work within Greenlight.
Current visibility: Hidden
This item will only be visible to you, admins, and anyone marked as a creator.
Current visibility: Friends-only
This item will only be visible in searches to you, your friends, and admins.
Escape 2042 - The Truth Defenders
Description Discussions0 Announcements2 Comments20 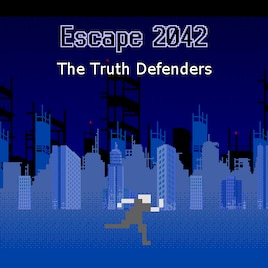 Orion_
Offline
See the collection (may be hidden)

View Escape 2042 - The Truth Defenders in the store

The game is now available on Steam, Enjoy !
http://store.steampowered.com/app/598590/

Thank you all for your votes !
Give me at least 2 months to finish the game and port it from Megadrive to Windows PC :)
In the meantime, you can support the KickStarter for the Megadrive, Gameboy, Dreamcast versions!
https://www.kickstarter.com/projects/orionsoft/escape-2042-the-truth-defenders

The Story:
In the year 2042, a socialist government is in power, but nobody had foreseen progressive dictatorship that settled in. The elites of the government hid behind a sham democracy, disconnected from the life the people were leading, and acted solely in their own interests.

The regime considered the dissidents as conspiracy theorists, treated them like terrorists and locked them away in highly-secured prisons, to prevent them from telling the people the truth about the manipulating medias accomplice of the government power.

You are Eris, a computer engineer and member of the Truth Defenders coalition.

After a clandestine operation to inform the people, you are locked away in the highly-secured prison Bulor 24.

But your knowledge on security systems will enable you to escape.

Your turn now to escape as fast as you can from this place!


The project is also targeted for retro gaming platforms such as Megadrive (Genesis), Gameboy, Dreamcast, PC-Engine.
Support this project on KickStarter: https://www.kickstarter.com/projects/orionsoft/escape-2042-the-truth-defenders
< >
20 Comments

edderiofer Jan 9, 2017 @ 3:44am
Graphics and music are on point. However, it feels like you're trying to cram too many different types of gameplay into your game. Abseiling minigame? Really?!

Unless you're marketing your game as "a mashup of a bunch of genres" (e.g. Evoland 2), this simply isn't going to fly.

Escape 2042 - The Truth Defenders has been Greenlit and is now listed in the Steam store. For the latest information, purchase options, and discussions for Escape 2042 - The Truth Defenders, please see it on the Steam Store or in the Steam Community.
Visit Store Page
For more details Visit Community Hub
For latest discussions
If you really, really want to, you can continue to the Greenlight page. Information on this page may be out of date, since all the action has moved to the areas noted above.