Store Page
RimWorld>  Workshop > The Word-Mule's Workshop
This item has been removed from the community because it violates Steam Community & Content Guidelines. It is only visible to you. If you believe your item has been removed by mistake, please contact Steam Support.
This item is incompatible with RimWorld. Please see the instructions page for reasons why this item might not work within RimWorld.
Current visibility: Hidden
This item will only be visible to you, admins, and anyone marked as a creator.
Current visibility: Friends-only
This item will only be visible in searches to you, your friends, and admins. 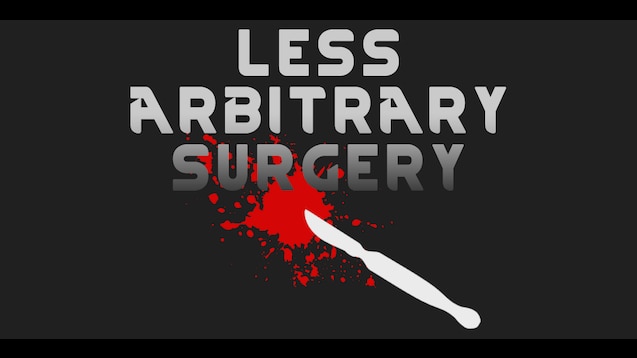 This item has been added to your Subscriptions. Some games will require you to relaunch them before the item will be downloaded.
Description
This mod changes surgery success to be less arbitrary and random. It doesn't change your surgeon's chance of success, but it does change failures in the following ways:

-If they don't succeed, they get a second chance to succeed with non-lethal injuries.
-If they fail, they have a chance to only give non-lethal injuries based on their surgery skill (as they identify that the patient is dying and abort the surgery).
-If they fail that, then the death on failed surgery chance is reduced by their chance to successfully complete the surgery.
-If the surgery is not lethal, the difference between catastrophic and minor failure is based on the surgery success chance, instead of being a literal coin flip.
-Only impaired pawns will ever have ridiculous surgery injuries.
-The tend quality of the bed is factored into surgery odds, so that hospital beds and vitals monitors contribute to success.
-Surgery failures will cause infection. Pawns injured during a successful surgery may get an infection, depending on the doctor's skill.
-Instead of doing 30 damage on a minor failure and 65 on a catastrophic failure, minor failures do 10-20 damage and catastrophic failures do 30-60. This makes it so that some surgeries (like on the head) are not disproportionately lethal even on minor failures.
-Instead of doing between 50-100% of a part's remaining health in damage per surgery injury, failures do between 10-25% of a part's remaining health, so that an injury is far less likely to kill or sever a part on a patient unless its total damage exceeds the part's remaining health.
-You will receive the body part or implant back on a minor failure.

Obviously will conflict with any other surgery mods that alter how surgery works in the code. Compatible with Psychology: http://steamcommunity.com/sharedfiles/filedetails/?id=747313773, EPOE, A Dog Said, DE Surgeries, and Mechanite Augmentation.
< >
132 Comments

Jack_Hazardous May 4, 2018 @ 9:02am
does this affect wound tending or only sugery like harvesting and implants?

Fanciful Spoon Apr 18, 2018 @ 5:43pm
@Gavrail Cause they like to be nice to players that still have save files from that version.

Gavrail Jan 28, 2018 @ 4:39am
I still don't get it why people create a new mod submission instead of updating the original.
The game updates automatically, why do modders insist on keeping the already subscribed mod on the previous version?