Greenlight > Games > Exploding Rabbit's Workshop
Greenlight is being retired. For more information on how to submit games to steam, refer to this blog post.
This item has been removed from the community because it violates Steam Community & Content Guidelines. It is only visible to you. If you believe your item has been removed by mistake, please contact Steam Support.
This item is incompatible with Greenlight. Please see the instructions page for reasons why this item might not work within Greenlight.
Current visibility: Hidden
This item will only be visible to you, admins, and anyone marked as a creator.
Current visibility: Friends-only
This item will only be visible in searches to you, your friends, and admins.
Glitch Strikers
Description Discussions9 Announcements2 Comments202 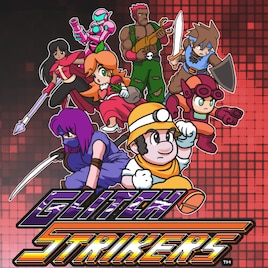 Great news… Glitch Strikers has been approved for distribution on Steam! This means we can release the game on early access later this year.

Although the greenlight process only lasted a few days, we received a massive amount of feedback, so we will be making some changes based on what we heard.

Many people were concerned that the games shown in the trailer were too similar to existing games, so we are focusing heavily on making them more creative and original. You will see some of these changes in an upcoming gameplay trailer.

Secondly, we’ve decided that instead of releasing separate “games” and later combining them into a story mode, we will make Glitch Strikers an episodic game with the story told along the way. It is very similar to what we already announced, but the overall story of Glitch Strikers will be woven into each episode, and each episode may not necessarily focus on one game world. The episodes will follow the story of Manni and his friends as they travel across games to solve the mystery of the glitches.

Thank you so much to everyone who voted. Stay tuned for the upcoming gameplay trailer of the first episode, Hyper Manni Pals. We expect it to be ready in a few months.

It looks awesome… but is it legal?
Everything shown in the trailer is original. There are no ripped sprites, sounds, music, or level designs. Before releasing the game, we’ll differentiate things more with things like new enemies, bosses, power-ups, and levels. We’ll be releasing a separate gameplay trailer before launching on Steam Early Access that will highlight the differences. The purpose of this trailer was to introduce the characters, worlds, and concept of traveling across games. I’ve already spoken to an attorney about this, and we will make sure we are legally ok before launching.

What is the actual gameplay like?
For simplicity’s sake, think of it as a more creative and expanded version of Super Mario Bros. Crossover with the concept being applied to more retro classics. The gameplay will match the genre of the game, so for the first part, Hyper Manni Pals, you beat one level and move onto the next, and you can choose from multiple characters.

Why did you decide to make it an episodic game?
Developing a big game like Glitch Strikers takes a long time. Without releasing in episodes, the game would have to be scaled down drastically in order for it to get done. With the episodic format, we can still make a huge game, but since it’s broken into parts, it gets into the hands of players sooner. As we develop each episode, we’ll have access to valuable feedback from the one before it, and can build on its strengths and weaknesses. We can do more of what people love, and less of what they dislike.

Keep in mind that each episode is self-contained, but it’s also part of a bigger story, just like an episode of a Telltale game. This gives us a huge amount of possibilities on where to take the game, and again, it’s all based on the feedback of the players. Additionally, early episodes will continue to get extra content as we add things like new characters to later episodes.

In the Kickstarter, you reached a stretch goal for Eve VII, a tank character. Will she be included?
Yes. We did not show Eve VII in the trailer because it was already over 5 minutes long.

Will you fulfill the Kickstarter rewards?
We will do our best to fulfill all the rewards for the game with one exception. We’re not sure at this point if we will do a 16-bit version of the graphics, so all rewards involving something 16-bit may not happen.

What if I am a backer and I still want a refund?
Once the game starts making a profit, I can begin refunding people again. Contact me after the game is on Early Access and we will work it out.

Read More
Description
Release date: Summer 2017 (Hyper Manni Pals in Early Access)
Experience everything you love from the 8-bit era and live out your fantasies of playing as characters that travel across games. Glitch Strikers is the amalgam of dreams for gamers that grew up playing 8-bit video games.

Glitch Strikers is the spiritual successor to the popular fan game, {LINK REMOVED}Super Mario Bros. Crossover (SMBC), and is the result of a successful Kickstarter (Note that most of the info on the Kickstarter page is no longer accurate.)

Glitch Strikers follows the story of Manni and his friends as they travel across games to investigate the cause of the mysterious glitches. Each game world they visit will be an original concept, but many will take inspiration from classic retro games. They all will include modern gameplay mechanics and features, and they’ll be playable by a variety of characters.

The game will be released in episodes. The first part, Hyper Manni Pals, takes its inspiration from Super Mario Bros. Crossover. It will be released on Steam early access in Summer 2017. Later episodes will include visiting game worlds that the other characters originate from. Some of them are shown in the trailer.
< >
202 Comments

IcedReaper Jan 18 @ 9:43pm
Wow this game has been in devoplement for ages now.

RetroPixelLizard Jan 1 @ 4:30am
I had just did a playthrough video on SMBC and decided to check this out only to find the release date was 1017 and still no release. I'm highly dissapointed. :(

They had plans to port SMBC to Unity but they gone quiet in 2019, I want to blame Nintendon't.

DJ Mouthwash Nov 29, 2020 @ 3:58pm
Oh man I thought this came out ages ago. I would have thought it would be a relatively simple conversion from the flash game?

OmegaFan18 Jul 8, 2020 @ 4:06pm
It's the Second Half of 2020, and It looks like it's gonna come out when:
- Tetris Effect releases for Nintendo Switch
- Super Meat Boy Forever releases Platform-wide (PS4, Xbox One, Nintendo Switch, Epic Games Store)
- EA gets to re-release TETRIS for PS3 and PSP

Shadowlight Nov 1, 2019 @ 7:08pm
@WeedBlunt Don't give up the faith; I bought TimeSpinner a long time before its release, (enough that I forgot about it being a game; (I played Terraria & TF2 instead) and before I remember, *BAM* one of the BEST (SNES-Styled) MetroidVanias I've ever played. Give it time, even better, forget about it for a while; but when u check back, if it's been long enough, *GET ON The Dev's ASSES AND REMIND THEM!*

fender Jun 22, 2019 @ 4:30pm
Right now Exploding Rabbit is working on porting Super Mario Crossover to WebGL due to Adobe Flash Player dying in the near future. For the past year on their twitter it was just tweets of silly bugs they encountered with the amount of tweets slowing down to once a month by Feburary. Their last tweet was from April 22nd and we haven't heard anything from them since.

TheLazyPlumbers Apr 7, 2019 @ 1:54am
I'd say this game is stuck in development hell, so it could well be dead or not come out for a very, very long time. It is sad, because I would have liked to play it.