Greenlight > Games > Hunter's Workshop
Greenlight is being retired. For more information on how to submit games to steam, refer to this blog post.
This item has been removed from the community because it violates Steam Community & Content Guidelines. It is only visible to you. If you believe your item has been removed by mistake, please contact Steam Support.
This item is incompatible with Greenlight. Please see the instructions page for reasons why this item might not work within Greenlight.
Current visibility: Hidden
This item will only be visible to you, admins, and anyone marked as a creator.
Current visibility: Friends-only
This item will only be visible in searches to you, your friends, and admins.
Kursk - Battle at Prochorovka
Description Discussions0 Announcements4 Comments23 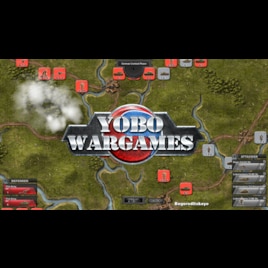 View Kursk - Battle at Prochorovka in the store

Just waiting on Steam approval to publish, so should be out later this week.

I am working on getting an Alpha release out in March. Check out new website Kursk - Battle at Prochorovka [kursk.yobowargames.com].

Alpha will have the full game playable as a two player game only (or you can play solo against yourself). Missing will be AI, some initial menus and Save game facility.

Looking forward to getting some feedback!

Read More
Description
Release date: 2nd quarter 2017
A fan of the old Avalon Hill/SPI WW2 strategy war games? Like to think about your next move rather than having quick reaction times? Battle Series Eastern Front - Kursk - Battle at Prochorovka is the game for you.

Battle Series Eastern Front - Kursk - Battle at Prochorovka, covers the largest single tank battle in the history of warfare. Approximately 1400 tanks and assault guns met head to head near the town of Prochorovka, in a battle that became a desperate close range shoot-out which would decide the ultimate success or failure of Operation Zitadelle.

The 2nd SS Panzer Korps began it's attack on July 3rd, and spent the next 8 days breaking through the dense Russian defensive positions. During the late afternoon and evening of the 11th, they broke through and repulsed a counterattack by the Russian 31st Tank Corps. Reorganizing during the night, the panzers struck northward before dawn on the 12th. As dawn broke, the lead German elements ran head-on into the lead elements of the Soviet 5th Guards Tank Army and the battle was on. It was to last all day, in confused and savage fighting at close ranges.

This game recreates that day with the player being able to play both as the Russians and Germans or against the AI. Go to {LINK REMOVED}yobowargames.com for the latest updates as the game develops

Key Features:
Infantry Battalion with Attack of 2, Defense of 3 and Movement of 6

Artillery with at top Range Attack of 1, Range Defense of 2 and a Range of 18

Tank Battalion with Attack & Defense of 6 and Movement of 7

I will look to localize this game as much as possible.

Kursk - Battle at Prochorovka has been Greenlit and is now listed in the Steam store. For the latest information, purchase options, and discussions for Kursk - Battle at Prochorovka, please see it on the Steam Store or in the Steam Community.
Visit Store Page
For more details Visit Community Hub
For latest discussions
If you really, really want to, you can continue to the Greenlight page. Information on this page may be out of date, since all the action has moved to the areas noted above.