Store Page
Arma 3 >  Workshop > jarrad96 [4SFG]'s Workshop
This item has been removed from the community because it violates Steam Community & Content Guidelines. It is only visible to you. If you believe your item has been removed by mistake, please contact Steam Support.
This item is incompatible with Arma 3. Please see the instructions page for reasons why this item might not work within Arma 3.
Current visibility: Hidden
This item will only be visible to you, admins, and anyone marked as a creator.
Current visibility: Friends-only
This item will only be visible in searches to you, your friends, and admins. 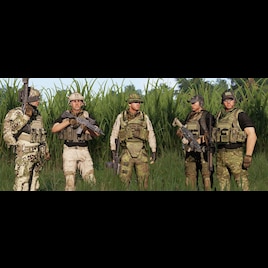 S.Bacon
Offline
See all 15049 collections created by jarrad96 [4SFG] and other people (some may be hidden)

This item has been added to your Subscriptions. Some games will require you to relaunch them before the item will be downloaded.
In 3 collections by jarrad96 [4SFG]
Special Operation Forces Factions [ALL]

11 items
Description
This is the VSM-All-In-One Collection, adding even more gear variety to the game. This Collection has the following mods included as a single download, for making your Arma tactical barbie gear loadouts-
VSM Uniforms
VSM Vests and Helmets
VSM Accessories
VSM Operator Beards

-M81 Woodland
This classic Woodland camo has existed in some form or another since the 1960's and it's use is incredibly widespread, being commonly used by many nations and groups around the world. It was originally a US-designed camo and is still used in some Special Operation Forces units.

-AOR1 (US Navy Arid)
This pattern of camo, called 'AOR-2' (Area Of Responsibility) or NWU2 (Navy Working Uniform) was a desert digital based on the existing MARPAT and Canadian CADPAT, but altered in tone and digital shape. It's almost exclusively issued to US Navy Special Forces, such as US Navy SEAL Teams and their supporting units, and has become their signature camo. AOR-1 is the Desert pattern.

-AOR2 (US Navy Jungle)
This pattern of camo, called 'AOR-2' (Area Of Responsibility) or NWU3 (Navy Working Uniform) was a jungle digital based on the existing MARPAT and Canadian CADPAT, but altered in tone and digital shape. AOR-2 is the Jungle Pattern, and it is rotated so the camo pattern is vertical instead of horizontal like AOR1.

-Multicam
This camo was designed in the early 2000's to be useful in multiple terrains or environments, hence the name. It has since become overwhelmingly popular and has, in some variation or the other almost been internationally used. it's particularly popular in Special Forces, but is also used by multiple national armies in different forms.

-Multicam OCP
Multicam (OCP) is a slightly paler in colour version of regular Multicam that has been adopted by the US Army in 2010 to replace the much-disliked ACU grey digital camo pattern.

-Multicam 'Scorpion'
This is another pattern of Multicam, but rather than having a paler colour tone 'Scorpion W2' but it has more muted greens, light beige, and dark brown colours, but uses fewer beige and brown patches and no vertical twig and branch elements. It's been used by a few US groups, such as ODA 'Green Berets' and is useful in semi-arid or more lush grassland terrains.

-Multicam Tropical
The is a much greener Multicam pattern that was meant for Jungle warfare. It has seen limited use among US and South American Special Forces in Africa and the Philippines area, but is not as widespread or as common compared to the more general multicam patterns.

-Multicam Alpine
Multicam Alpine is a winter variant of Multicam that was designed for use in snowy environments, and it has seen some limited use by US Navy SEALS during winter exercises.

-Multicam Black
Multicam Black was designed for use by Police, SWAT and other law enforcement groups for urban operations, and has been used by American, Iraqi, South American, Asian and European government police or military forces.

-Project Honor Digital
Project Honor is an interesting camo- it was originally designed for Medal Of Honor-Warfighter' as a mixed woodland-terrain digital camo pattern, with some of the money raised from purchases donated to military charities. It has seen no official adoption by any military forces, but has been seen as a private-purchase item in the field in small numbers.

-Desert Tiger Stripe
Desert Tiger Stripe is most well-known for its use by CIA supported forces such as the Special Activities Division, 'Ground Branch', Task Force Orange, Afghan NDS and Task Force Black in Iraq and Afghanistan but saw use outside of those parties. I've spoken to people who used this camo operationally, and it was mostly fading from use by the 2010's.
All uniforms come in rolled sleeve and mixed color versions for the Crye Gen3 uniform, 'Massif' AAF base uniform, and rolled T-shirt/ undershirt/ Torn guerrilla versions.

LBT 6094-
The LBT 6094 is one of the most-used plate carriers in the Special Operations Forces community, and the armor itself was part of a collaboration with US Naval Special Warfare (NSW) units. The vest has a medium/large load capacity. Ingame all the ballistics plates in MLO Mods are outfitted with ESAPI hard armor plates for improved protection from rounds or shrapnel, equivalent to LVL III or IV body armour.

LBT Armatus-
The Armatus vest is one of the larger vests available in the mod, and provides side armor plates which give it armor protection in the sides which some other vests lack. It has a large load capacity and makes a good frontline fighting vest or for CQC fighting.

Paraclete RAV–
A classic body armour that saw extensive use with Special Operations particularly in Iraq and Afghanistan such as US Army SFOD-D Delta and others.
All of the vests come in 3 or more versions. The 'Breacher' vest adds a (non-functional) breaching shotgun to the vest, while the 'Operator' vest is more standard. The 'Gunner' vest is designed for machingeuns or autorifles and has large ammo boxes included on the models. The Gunner vest has a much higher load capacity than the others but is also a heavier vest.

MBSS Vest- MBSS + PACA armor plate-
A light vest that also comes with a version with PACA armor plate, providing additional protection and armor coverage at the cost of weight. This plate is very small and light weight, and is more suited for small hit-and-run or short duration raids, as you cannot carry a large ammo supply and the ballistic plates themselves do not have wide coverage.

PHANTOM 15 hours ago
Running into a small bug when saving a mission to SP, doesn't happen in Eden. My player is missing his vest and backpack on startup, but not my ai team. Error saids this....

not sure what could be going on.

Longshot133 Sep 1 @ 10:20am
Hello, I was wondering is it would okay if i uploaded a patch to the uniforms that lowers the armor value a bit. I made this for my unit and was wanting to ask your permission before it became a standalone thing. I would make sure to give proper credit, as well as it still relies on the base mod to function. I haven't changed anything other than the armor values.

Tibozeboss Aug 11 @ 3:44pm
Hey, can i know if it's legal (and if i have your permission) to retexture some of your uniforms? And if so, are there templates available?

Sgt.RiceFarmer Jul 14 @ 7:55pm
Will there be a version of highcut helmets with opscore amps eventually?