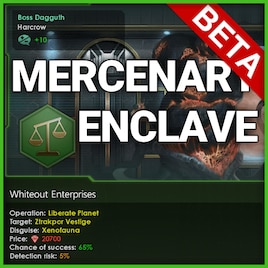 Stark43
Offline
See all 1110 collections created by folk and other people (some may be hidden)
You need DLC to use this item.

33 items
Description
Adds a new type of Enclave to new games; the Mercenary Enclave!
Works with existing savegames, spawns a new random solar system for the Enclave.
100% chance of 1x spawns in new games.
Compatible with all addons.
Works in multiplayer.
AI does not use the Enclave services (AI doesn't use any enclave).

I have marked the addon as requiring the Leviathans DLC because Paradox fanboys complain in the comments section.

Mercenary Operations fleets, once they reach the solar system where their primary target is, turn hostile towards everyone. Please do not attempt to follow them into combat, or use them as "allies" in wars. You can do that, of course, just stay away from the fleet.

Beta
There's a few features I can add, but someone needs to tell me if they want them or not:
Does the AI Revolt empire, Swarm, or ED colonize planets? Should they be valid targets for the "liberate planet" option? Why can noone answer this in the comments?

Tuning/adjusting
We probably need to tune/adjust the costs of some operations. I really need some input here. I have no idea what things should cost. Tell me what YOU think in the comments, please.

Services
Whiteout Enterprises offers a wide range of services, depending on several factors, including trust towards your empire and the target you select.

Not all operations can be conducted against all empires. Swarm/ED/Fallen are also valid targets, but not for all types.

1. Attack Spaceport
Base cost: 5000 minerals
Success chance: 80%
Detection risk: 20%
The enclave selects a spaceport in the target empire, and sends a dedicated operations fleet to destroy it.

2. Fleet Raid
Base cost: 10000 minerals
Success chance: 80%
Detection risk: 25%
The enclave selects a valid military fleet target in the target empire, and attempts to kill it and all ships within. Will track ships that are split from the original fleet, and even if the fleet is entirely gone it will still hunt down the ships that were part of the original fleet.

4. Liberate Planet
Base cost: 15000
Success chance: 75%
Detection risk: 35%
Finds a colonized planet in the target empire, sends a fleet to bombard it and then invades it. Once the mercenaries have control of the planet, the population will be "convinced" to adopt the same ethos as you, and a new puppet government will be created, installed, and the planet instantly liberated from what we can only presume is the tyranny of their overlords.

5. Clear Space
Cost: 300 - 3000
Success chance: 95%
This operation is only available once you reach a certain trust level with the enclave. They will dispatch a fleet to clear out space monsters around inside your territories, allowing you to focus your time and energy on other tasks.

Success Chance
We've tried to interpret this number many times, but we simply can not find a consistent behavior. It seems that the higher the chance is, if their initial fleet is destroyed, there is a higher chance that they will send another one.
But we don't know.

Note that different empire target types can impact the success chance of an operation.

Detection risk
Several factors will modify the chance that you are revealed to the target empire as to who ordered the operation. The problem is that sometimes during an operation, the target will capture and interrogate the mercenary operatives. This is simply an estimate of the chance that this will happen.
Empires that detect an operation against them will be really angry with you, depending on the type of operation and their ethos.
Players will get a notification telling them who ordered the operation, if they manage to detect it.

Depositing minerals
The mercenary enclave can act as a sort of bank for you, where you can deposit minerals in 2500 chunks. Doing so will increase their trust of you by 5, but they will collect an administrative fee of 5% per year.
If the enclave is destroyed, all your deposits are gone.
When you order an operation from the enclave, they will first use up any deposit before they access your empires treasury.

If you revoke the access, and there is a station complex inside your borders, the enclave will not care. The complex will remain, and if you want it gone, you will have to attack it.

Want to take over this mod?
I hang out on the NSC Discord server[discord.gg], almost every day - even though IRC is far superior to this ♥♥♥♥♥♥♥ called Discord. If you want to talk to me, you need to @-mention me, and I ignore most of the channels on the server except the modding-discussion one.
If you want to take over ownership of this addon or any other in my profile, that would be awesome. And you can obviously ask me anything on Discord.

I do not read comments or forums on Steam any more. I can only be reached on Discord.
< >
272 Comments

Stark43  [author] Apr 30 @ 3:15am
Original author left Steallaris modding long time ago, last author was me. After updating my Pirate Enclave mod, i will back to this one..Although this update will be easier .. In short, I think that I will update first

Robert Oppenheimer Jul 29, 2019 @ 3:14pm
The mod is unplayable for me. I have more then enough resources for them to carry out a mission but every time I ask them to they say "we can not access your treasury" which cancels the order.

Keylior Sep 9, 2018 @ 1:35pm
You should lower the ressource reward to 1500 just because the debris are way too valuable than the actual ressources

Abom The Snowman Aug 18, 2018 @ 11:59pm
Clear Space Marauders doesn't seem to work. Is there a place to post possible bugs besides the comments?