Greenlight > Games > Starlit Studios's Workshop
Greenlight is being retired. For more information on how to submit games to steam, refer to this blog post.
This item has been removed from the community because it violates Steam Community & Content Guidelines. It is only visible to you. If you believe your item has been removed by mistake, please contact Steam Support.
This item is incompatible with Greenlight. Please see the instructions page for reasons why this item might not work within Greenlight.
Current visibility: Hidden
This item will only be visible to you, admins, and anyone marked as a creator.
Current visibility: Friends-only
This item will only be visible in searches to you, your friends, and admins.
Numina
Description Discussions0 Announcements3 Comments50 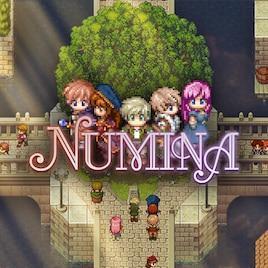 Starlit Studios
Offline
See all 7 collections (some may be hidden)

View Numina in the store

Store page
Recent Announcements View All (3)
We made it!
February 16, 2017 - Starlit Studios

Numina was greenlit! 🎉😆🎉 Thank you so much for your support! I really appreciate that the project has it's followers after all the years I worked on it. I'd like to release one more update for the Demo with some fixes & improvements that from your feedback. :) see you soon!

The official demo of Numina has just been released! Download Now![starlit.itch.io]

The demo spans for about ~5h and contains the first chapter of the story in both German and English! I can't wait to hear your feedback ♥

Read More
Description
Numina - a 4th wall breaking RPG which makes the characters and the world surrounding them aware of you - the player. Embark on an epic journey with them!

Story
It all begins in a remote village, where a young man called Shawn travels together with his friends to a nearby templesite, called the Temple of the Clouds. But the beauty of the scenery seems to be but a cover, as Shawn accidently discovers a secret basement in the temple.

There, Shawn gets into contact with you(!) - a guardian spirit. A bodyless entity from ancient tales... that talks in his head! But Shawn has no time to worry as a mysterious, shrouded group arrive at the temple, questioning Shawn's intrusion. Events spiral out of Shawn's control, dragging you along with Shawn and his friends into a fateful journey that will discover the true nature of your bond and the dark secrets of this world!

Gameplay
The main focus lies on the bond between you and Shawn and how well you two get along as you travel the world of Alterna. Shawn's affection towards you and other characters is influenced based on what you say to him during the course of the story!

The game incorporates a turn-based battle system, fused with action-commands for certain skills that require precise timed-inputs. Each character brings their own battle-style into play for a thrilling battle experience.

Upgrade your gear with materials that you find in the field, find hidden passages and rare treasures by using tools such as a grappling hook - or dive more into the lore of Alterna by completing sidequests!
< >
50 Comments

Numina has been Greenlit and is now listed in the Steam store. For the latest information, purchase options, and discussions for Numina, please see it on the Steam Store or in the Steam Community.
Visit Store Page
For more details Visit Community Hub
For latest discussions
If you really, really want to, you can continue to the Greenlight page. Information on this page may be out of date, since all the action has moved to the areas noted above.