Store Page
Natural Selection 2 >  Workshop > &gt;|KoR|&lt;Frisqy.ViruS (ZdrytchX)'s Workshop
This item has been removed from the community because it violates Steam Community & Content Guidelines. It is only visible to you. If you believe your item has been removed by mistake, please contact Steam Support.
This item is incompatible with Natural Selection 2. Please see the instructions page for reasons why this item might not work within Natural Selection 2.
Current visibility: Hidden
This item will only be visible to you, admins, and anyone marked as a creator.
Current visibility: Friends-only
This item will only be visible in searches to you, your friends, and admins. 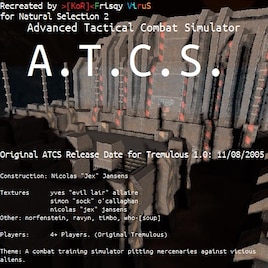 This item has been added to your Subscriptions. Some games will require you to relaunch them before the item will be downloaded.
In 1 collection by >|KoR|<Frisqy.ViruS (ZdrytchX)
ZdrytchX's Classic Pack

8 items
Description
After a rather long hiatatus and getting biege to find what the cause of the rather silly error I decided to use the working co_atcs version and commented out the code, and reworked no the bunker area. Rather than having a pitfall in which you would get stuck when you spawn, the entire half of the bunker is a pitfall itself with stairs (that you have to jump up).

ATCS remake from Tremulous, made from scratch. Planned so far to be a 100% replica, and when the mapping and texturing is done, the map will be properly scaled to size (since the editor works in inches for some silly reason despite the engine using metric system)

Current devations from the original in the map: Front building area as seen in middle and the side skirts of the building decoration (can't be bothered fixing for now), missing lights in the 'donut' rooms, and a few textures are misaligned with some purposely that way for the better look. Lighting is very different because the spark engin is VERY limited in what it can do with lighting.

An adaption for NS2 Combat has been completed, see https://steamcommunity.com/id/ZdrytchX/myworkshopfiles/?appid=0&sort=score&browsefilter=myfiles&view=imagewall for more mod specific versions of this map
< >
3 Comments

>|KoR|<Frisqy.ViruS (ZdrytchX)  [author] Dec 16, 2016 @ 6:58am
Note: It'll be playable with regular ns2 as well. Since this map is quite a small map and is literally designed for 2+ players (according to the readme of the original) it may not be suitable for games > 6v6 players in ns2. Hopefully this'll get players interested in starting small games on this map too.

Tremulous however has had as much as 92 players in one game, and it certainly isn't fun for aliens with this cramped small map :P