Store Page
Cities: Skylines>  Workshop > MrMaison's Workshop
This item has been removed from the community because it violates Steam Community & Content Guidelines. It is only visible to you. If you believe your item has been removed by mistake, please contact Steam Support.
This item is incompatible with Cities: Skylines. Please see the instructions page for reasons why this item might not work within Cities: Skylines.
Current visibility: Hidden
This item will only be visible to you, admins, and anyone marked as a creator.
Current visibility: Friends-only
This item will only be visible in searches to you, your friends, and admins. 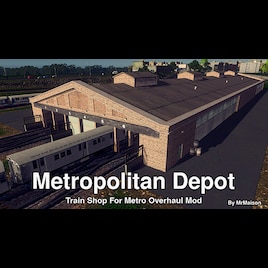 This item has been added to your Subscriptions. Some games will require you to relaunch them before the item will be downloaded.
In 1 collection by MrMaison
MrMaison's NYC Subway Collection

Introducing the Metropolitan Depot! It's a depot/shop giving your new metro trains a home as they now can see the light of day with the new Metro Overhaul Mod. This is a great centerpiece for a metro/subway train yard.

PLEASE READ! This info is from Lazarusman, the author of Metro Overhaul Mod

Rule1: Make a direct path between the depot and the station along the route that is closest to the depot

Rule2: Trains from the depot will not leave it's route once it is on it. If the direct path from the depot to the depot's closest station requires the train to enter and then exit it's route, it probably wont spawn.

Rule3 (jury's still out on this one): Depots don't seem to have much problem with distance. As long as it has a direct connection to the closest station to it in the route (even if the closest station is far away). However, results vary when the trains have to pass through multiple stations to get there. If it is one station, no problem but more than that and things get a bit uncertain. I will do more study on this. At some point I am probably going to make a visual aid for this

Strongly suggest getting Train Converter Mod so existing stations and trains can be used with MoM. http://steamcommunity.com/sharedfiles/filedetails/?id=795514116

Big thanks to Lazarusman and Bloody Penguin for making this happen!

7/17/2017 This building is now available as a place anywhere asset http://steamcommunity.com/sharedfiles/filedetails/?id=1078685399

roman_majcher Sep 20 @ 11:07am
Is it possible to have a version of MOM without needing to use the depot? Depots are just a headache, and they never seem to work!

Benito Mussolini Aug 21 @ 11:50am
Hi I am trying to make my huge city as efficient as possible when it comes to my metro lines. But I cant help but wonder if having 2 metropolitan depot would prevent one of them to stop spawning because I have been messing around with it for hours and I cant find a work around.

pappadudat Aug 5 @ 8:21pm
Having trouble with this mod. Seems the elevation always spawns at the ends of the station. I posted a picture. https://imgur.com/sNgIi2P

MrMaison  [author] Jul 27 @ 8:20am
@Oldhip- The patch is no longer needed. I removed the link from the description.

Lorenzo94 Jul 14 @ 8:14am
Hi, would it be possible to make an underground version of the depot to put in city centres?

kai.extern+*****powered Jun 11 @ 10:38am
This seems to be trying to use "Metro Station Track Ground" which can't be found. Presumably, that's why it fails to load.