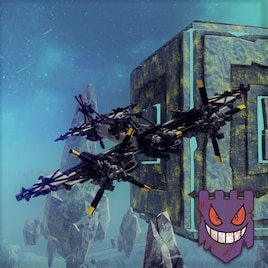 This item has been added to your Subscriptions. Some games will require you to relaunch them before the item will be downloaded.
In 2 collections by Brooka
Brooka's Toybox

A plane with a real bite. There is a trend of super fast vanilla air-craft on the workshop at the moment, so I thought I'd throw my hat into the ring, and build a more traditional looking high-speed craft with emphasis on agility.
The Viper uses variable-pitch props to achieve insane speeds, it can quite happily climb vertically without stalling, both with forward or reverse thrust!! Not a plane for novice pilots, it is a handful.
The look of the craft was inspired by one of my favourite planes on the workshop, CCC's SFP-V30.

Tips:
To takeoff pitch blades all the way with Z, hold up to pitch up and then toggle thrust, the plane will then take-off.
Use invincible and infinite ammo to use the automatic machine guns (can work without invincible if shot in bursts or at lower airspeeds).
The Viper is very responsive (very twitchy at 100%, its built for stunts :D), so I advise running at 70% speed and being gentle with the controls.
Use reverse thrust to preform crazy tricks, like stall turns.
To taxi, keep props in default pitch position and hold down to prevent the craft from lifting.

Controls: (all control surfaces are RTC, if you wish to remap the controls, remap the pistons)
Up and Down keys: Controls pitch
Left and Right keys: Controls roll
Q and E keys: Controls yaw
L shift: Toggle engines (the craft cannot take off with just the engines toggled, the blades need to be tilted)
L ctrl: Reverse thrust
Z and X keys: Controls the pitch of the propellers, in their default position the blades do not provide much speed, pressing Z will change the angle of pitch and generate much more thrust.
1 and 2: Raise or lower landing gear
Y key: Cannons
F key: Change view

If this stunt plane is a bit too fast and responsive for you, I suggest you try my Adder, its similar in design, but far less twitchy, slower too.

I know there are a few skinpacks, but I designed this plane to look good even without the packs, so you can choose whether to use them or not.
Of course totally vanilla, no mods or bsg editting, if you want more vanilla builds check out my workshop ;D
< >
2 Comments