Store Page
ARK: Survival Evolved>  Workshop > Kaliya's Workshop
This item has been removed from the community because it violates Steam Community & Content Guidelines. It is only visible to you. If you believe your item has been removed by mistake, please contact Steam Support.
This item is incompatible with ARK: Survival Evolved. Please see the instructions page for reasons why this item might not work within ARK: Survival Evolved.
Current visibility: Hidden
This item will only be visible to you, admins, and anyone marked as a creator.
Current visibility: Friends-only
This item will only be visible in searches to you, your friends, and admins. 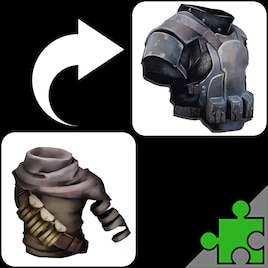 This item has been added to your Subscriptions. Some games will require you to relaunch them before the item will be downloaded.
In 1 collection by Kaliya
Karnwyn's Lair Mods

40 items
Description
This simple mod adds craftable skin versions of -most- vanilla armors to the game. Ever wanted to be an arctic commando, camouflaged in your snow-dyed ghillie suit while still wearing furs for their hypothermal insulation? Or wander the desert as a Riot-clad badass while still keeping your cool thanks to desert cloth? Or maybe just create a mash-up of armor from different sets while still maintaining practical stats? Now you can!

As these skins allow a wearer to conceal what sort of armor they are actually wearing (and thus the estimated properties of their defenses), it is recommended that discretion be used before applying this mod to PvP servers. Unless you support that kind of deception!

* - In order to facilitate the use of Desert Cloth skins on ARK Prime maps, their engrams require regular Cloth armor engrams instead. The unlock level remains unchanged.

** - The following engrams have different material requirements:
- Fur armor skins require half as much Pelt, while the amount of Hide required has been increased by the amount of Pelt removed.
- Ghillie armor skins require twice as much Hide and Fiber, and the Organic Polymer requirement has been replaced by an amount of Thatch equal to 20 times the Organic Polymer originally required.
- In order to facilitate their use on ARK Prime maps, Desert Cloth skins do not require Silk and instead require additional Fiber equal to the amount of Silk originally required.

What about SCUBA Armor?
-Yes, I do intend to incorperate the SCUBA Armor set at some point in the future. Currently, it is unavailable due to encountering issues in my initial attempt to do so, but I will be making another attempt when I have the time available.

What about TEK Armor?
-No. I consider TEK Armor to be a special kind and tier of armor, considering it requires special Tekgrams to equip. As such, I believe the privilege of wearing its appearance should also be restricted by this limitation. (Addendum: I may reconsider this stance in the future, but at current it still applies.)

What about hidden / unincorporated armors (ie. Manticore armor)?
-No. I will leave such endeavors to other modders. If such armors are ever officially included into the game, then I will update this mod to include skin versions.

What about armors added in the future?
-Assuming I am still involved with ARK at that time, and assuming it does not fall within the 'TEK Tier', I will update this mod to include skin versions.

Alternate version for Primitive+?
-I do not play Primitive+, but if I do I will consider it. Until then, no.

What about skin versions of the armors from <insert mod name here>?
-No. Mien Gott.
Popular Discussions View All (3)

Bravo Stasis Aug 3, 2019 @ 2:11pm
This is a super cool mod, but i have one complaint... Why isn't there tek skins? i like Halo and i want some halo skins, but there isn't any mods for it, so i went to the next best thing which is tek armor, and as you know, tek takes forever to get, so i wanted some tek armor skins but there is none. Please add tek skins

Mahiira The Huntress Jul 19, 2019 @ 5:53pm
Does this mod still work properly? I have S+, Ancient dragons/wyverns mod, a stacking mod, dino tracker and 6 other mods and I'm worried since this mod hasn't been updated in a while that it will conflict somehow.

Chinese Bootleg: BOoLi EyeLash Mar 7, 2019 @ 3:40pm
Was the scuba ever fixed? I'm looking for a mod that lets you use the default scuba legs as a skin.

Tamardia Feb 10, 2019 @ 9:12pm
Is there any hope for a "nude" skin, aka your average "woke on the beach" skin, not actual nudity? I play on an RP server, and I would love for my char to not wear a shirt at all... But it's also a PvP server, so for the sake of my prolonged life, that is not really viable.

Drdinobub Nov 29, 2018 @ 12:59pm
Thank you for deciding to continue working on this I would have made a mod like this but the dev kit is way more complicated than I thought. Also no rush just work on this whenever your bored or want to work on it or smth.

Wes Nov 21, 2018 @ 1:05pm
We'd really appreciate it. Its one of the lightest and no-nonsense skin mods out there and gives our RP server the flexibility to customize looks without compromising the armor they want to use. We've had zero issues using it so far on Extinction. :)

Kaliya  [author] Nov 21, 2018 @ 8:04am
Rather surprised that people are still using my mod, and that it even still works properly. Or that someone hasn't gone and made their own version. Well, arright. Even if I'm not actively playing ARK at present, I do still support it. It's got memories, and a special place in my heart. That's enough to warrant updating this little contribution I made to the game. No promises on an ETA, but I'll work on it and see what I can do about picking back up where I left off and adding some of the requested things to it.
< >