Greenlight > Games > dave_draws's Workshop
Greenlight is being retired. For more information on how to submit games to steam, refer to this blog post.
This item has been removed from the community because it violates Steam Community & Content Guidelines. It is only visible to you. If you believe your item has been removed by mistake, please contact Steam Support.
This item is incompatible with Greenlight. Please see the instructions page for reasons why this item might not work within Greenlight.
Current visibility: Hidden
This item will only be visible to you, admins, and anyone marked as a creator.
Current visibility: Friends-only
This item will only be visible in searches to you, your friends, and admins.
Skelattack
Description Discussions0 Announcements4 Comments112 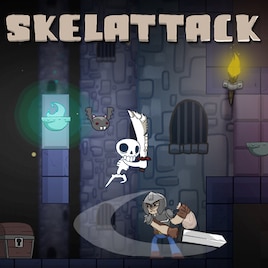 dave_draws
Offline
See all 4 collections (some may be hidden)

View Skelattack in the store

Skelattack just made it through Greenlight!! I can't thank you guys enough for your votes, feedback and general support. I've got a lot of things on the way for this adventure, and I hope to see you in the dungeon in 2017!

It's wonderful to see this game sparking conversation and intrigue. IndieHangover makes it well-known what they love about Skelattack, but are not shy to mention what could be improved. For an indie developer, that's extremely valuable. Cheers to them!

Originally posted by IndieHangover:
"I also love the eye Dave is giving towards world building, including snippets of lore and legend from the perspective of the dungeon dwellers who are under constant attack from adventurers. The idea that they would turn to art and poetry to make their doomed lives fulfilling is as hilarious as it is heartbreaking, and gives Dave the perfect opportunity to create a rich world full of stories and secrets."

If you are a member of the press (large or small) and would like to speak with me about Skelattack, or just write/record your own piece about the game, feel free! I love to talk about my experiences with this project, and how it continues to take shape.
Read More
Description
Release date: first quarter 2017
For centuries, mankind has traveled the land to raid dungeons for riches and glory.
This is not their story.

I invite you to ponder what daily life is like for the dungeon-dwellers.

You are an enchanted skeleton, living in the deepest part of the dungeon. You awaken to the terrible sound of the Alarm Bell, whose sole purpose is to let you know that intruders have been seen within the dungeon. Your helpful bat companion is by your side, ready to cast whatever magic spell you have chosen for her to hold. Sword in hand, you exit into the Sewers of the dungeon to begin your hunt. No intruders can be left alive to tell of this place.

I don't want to read, I want to play!
Well then, here's a demo! This thing is my pride and joy, and the gaming community has been insanely helpful in helping me test and polish it before I came to Greenlight.

Dungeon Travel
Making the player feel agile and in-control was a must from day one. You can jump, double-jump, and wall-slide on all surfaces. Your sword attacks are lightning-quick.

Dungeon Living
There's lots to see in this massive dungeon. It is divided into distinct areas that serve a purpose for the entities who live there:
Friendly Faces
There will be a number of interesting characters to meet and chat with. Bouncing Jellies, Demons, and of course other skeletons. Many of these characters can assist you in some way, and others just want to chat or thank you for your service. Some of them (such as the Jellies) are too weak to defend themselves, and are incredibly grateful that you fight in their name.

Unfriendly Faces
Raiders, thieves, and warriors from miles around have descended upon your home in search of treasure. The enemies you encounter will have strengths and powers that must be dealt with accordingly. Currently in the game:
Upgrades
Within the dungeon you may find a Blacksmith...surely he can improve the damage dealt by your sword!

She's your best friend, and always ready to chat! Talking with her during normal gameplay is completely optional, but it's interesting to hear what insights she may have about certain situations. She has amazing hearing, and can tell you if any enemies are still left in an area before you leave. Players who are used to the dungeon may want to move more quickly, so I decided not to force you to chat with her. At any rate, she will handle all of your magic spells (as long as you have Magic Power). Don't leave home without her!

Magic Spells
Like other things in this game, Magic is completely optional to the player. I want you to decide how you would like to play Skelattack, and not have it forced upon you. That being said, your bat companion can only carry one magic scroll at a time, so choose wisely! There will be areas in the game where you can swap out one spell for another if you'd like to try something different.
At the moment, the only spells are:
Traps
No dungeon is built for comfort. There are a number of pitfalls and traps that will kill you easily. Arrow traps, cursed runestones, spinning sawblades, and fall damage need to be handled with care. Of course, there are situations where you can use a trap to your advantage to hurt your enemies!

Music
At the moment I'm using royalty-free music in the teaser video and demo itself, but I will be taking a look at original composers in the future. Working alone on this project meant saving money where possible.

Lore
The world of Skelattack is RICH with stories, history, and in general the memories of a booming society. Humans raid dungeons without a second thought to the lives of those inside. The inhabitants of the dungeon feel shunned by the world, and in many cases have turned to literature and the arts to have some semblance of a normal life.

Lore can be found by reading at book shelves. Each bit of lore is called randomly within the game, so you never know what you'll find next. All discovered Lore is saved into the Library, where it can be read at a later date, and in greater detail.

Puzzles
There is some light puzzle-solving in Skelattack, but generally nothing that takes away from the action. You'll need to pull some levers to unlock areas where enemies lurk, or be creative and find the right path leading to the exit. Knowing when and where to use certain magic spells is also important if you want to find all of the dungeon's secrets.

Saving
Skelattack auto-saves in each new area, and you can save the game manually by lighting up one of the many blue torches you find around the dungeon. The game remembers where you are, all of your stats, as well as any enemies you have killed.

Execution
I'm the animator, artist and programmer for Skelattack, and it's been a wonderful passion project for over a year. I have polished the demo as much as I could so that you can get a perfect sense of what is being offered here. This is not a project that will benefit from rushed art/programming. Development is done in Game Maker Studio: Professional and will be available for PC and Mac!

Thanks for your time, and I look forward to seeing you in the dungeon.
~David Stanley 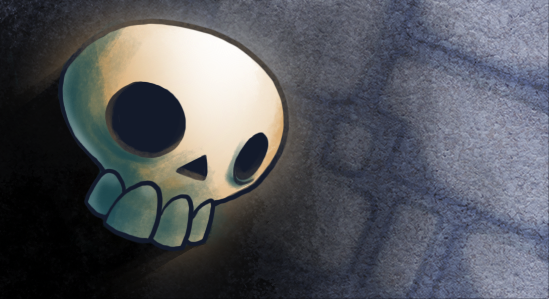 dave_draws  [author] Dec 28, 2016 @ 8:30am
@_J_: Oh man, I really appreciate your feedback on this. A huge priority for me was to make the game shine visually. I LOVE Flash (Newgrounds fan from the old days) and the cartoony style has always suited me well.
Interesting you bring up an alternate animation for the sword attack...it was something on the edge of my mind for a while but never did anything about it. Setting it up would be no issue at all, just a matter of running an RNG to randomly switch the animation. I'm adding this to the list of updates for sure. Thank you for properly putting the issue back in my mind, and Happy Holidays!

Thanks for the kind words and support!

Johnny Dec 28, 2016 @ 1:52am
First off the game visually is AWESOME, I love this kind of flash animation style. Second off, if there's one thing missing from all of this it's a combo slash animation. That's one of the few things you need to make it feel really there, one slash animation gets kind of lame after a bit, the unly circumstance that would be fine in is if all the enemies were a one shot. Upvoted and cheers!

Skelattack has been Greenlit and is now listed in the Steam store. For the latest information, purchase options, and discussions for Skelattack, please see it on the Steam Store or in the Steam Community.
Visit Store Page
For more details Visit Community Hub
For latest discussions
If you really, really want to, you can continue to the Greenlight page. Information on this page may be out of date, since all the action has moved to the areas noted above.