Greenlight > Games > all-in's Workshop
Greenlight is being retired. For more information on how to submit games to steam, refer to this blog post.
This item has been removed from the community because it violates Steam Community & Content Guidelines. It is only visible to you. If you believe your item has been removed by mistake, please contact Steam Support.
This item is incompatible with Greenlight. Please see the instructions page for reasons why this item might not work within Greenlight.
Current visibility: Hidden
This item will only be visible to you, admins, and anyone marked as a creator.
Current visibility: Friends-only
This item will only be visible in searches to you, your friends, and admins.
Lord of Poker
Description Discussions2 Announcements7 Comments150 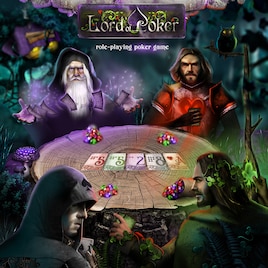 sanja
Offline
See all 6 collections (some may be hidden)
Kickstarter
Recent Announcements View All (7)
Lord of Poker - Review
June 8, 2018 - sanja

Hi, Lords!
We are sorry that "Lord Of Poker" is not ready yet.

Do not hesitate ask any questions.

You can choose a favorite character: Wizard, Paladin, Assassin, Druid or Monk. The game for each character will be different.

Game storyline and every card combat will take place in fantasy poker world at different locations, which have their own unique atmosphere and will affect the gameplay in a certain way.

Every card combat is a short 10-15 minute game for 6 players. You have to fight not only with real users, but also with bots - locations inhabitants. During the game you can use spells, for example, to change your opponent’s cards, silently steal gems from another player, etc. Knocking bots out from the game, the player will receive various resources that can be converted into useful artifacts, such as armor or helmet.

In Lord of Poker, every class (Assassin, Paladin, Wizard, Druid, and Monk) has their attributes distributed between four primary skills:

While adventuring in the World you will visit various original locations where card combats occur between players and AI-players: Tavern, Forest, Swamp, Mountain Trail, Desert and others.

As you engage in card combats in different locations, you will see how various environmental effects influence your play; such as “Fuddle” in the Tavern, “Fear” in the Forest, “Sink” in the Swamp, etc.

Each location has its own unique mobs which vary in strength and try to win card combat using different magic spells. The AI-players always play as a team.

Although you may choose to play on any location you would like, we have set some recommendations regarding the level your hero should have attained in order to succeed in card combat in a particular location. The further you proceed from the Tavern the stronger and more skillful are the AI-players you will encounter.

We have been devoted to the idea of this game for more than a year and would be glad to share each and every detail with our fans, or those interested in the project. We do not want to overload you at this stage, however we will have further announcements and explanations, so stay tuned! In the meantime, we welcome your questions, and will try to answer them as quickly and fully as possible!
Popular Discussions View All (2)

Questions about Lord of Poker gameplay and mechanics
sanja
< >
150 Comments

HellCow (DannyDOA) Jan 2, 2017 @ 10:33am
Hey, if your interested i coud promote your game or/and if you need/want i test the game to write a review for it and find glitches/bugs if there are any.
Also i can get some more testers if necesary, Add me if interested in steam or send me a mail: Liecis19@gmail.com