Store Page
Wreckfest>  Workshop > Purple44's Workshop
This item has been removed from the community because it violates Steam Community & Content Guidelines. It is only visible to you. If you believe your item has been removed by mistake, please contact Steam Support.
This item is incompatible with Wreckfest. Please see the instructions page for reasons why this item might not work within Wreckfest.
Current visibility: Hidden
This item will only be visible to you, admins, and anyone marked as a creator.
Current visibility: Friends-only
This item will only be visible in searches to you, your friends, and admins. 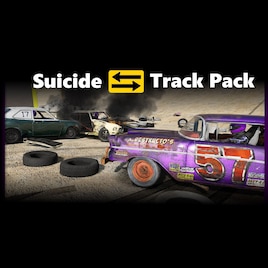 Purple44
Offline
See all 29 collections (some may be hidden)

This item has been added to your Subscriptions. Some games will require you to relaunch them before the item will be downloaded.
Description
My Suicide mod has been redone. Check the change notes for changes, like drop tracks. :(

What a Suicide track? It a track where cars go both directions on same portion of track. Get to play chicken and see who wins. :)

Will need 2 mods, listed in this order in your Mods list:

New from other modders:

No Prospect - From Suicide Alley: No Prospect version mod by FredReset and MarcellusW. Thanks!


For details on making the suicide tracks and the redo, go here: Suicide Track Pack - Redone[community.bugbeargames.com]

Big thanks to MarcellusW for the Bugbeer bottles and other Bugbear icons I got use on the tracks. :))

What a Suicide track? It a track where cars go both directions on same portion of track. Get to play chicken and see who wins. :)

Suicide Sandpit1 - Easiest of the 3 tracks.

Suicide hill is a loop you can take in either direction.
Might slow down a bit at the ramp jump at finish line or car may go for a tumble on the landing.

Suicide BugBeer Run - Medium in difficulty of the 3 tracks.

There 5 loops and a crossing area you will have to get through 3 times.

There are some signs to help remind you which way you can go. There is a risky shortcut through the trees you can use if get back on the track before you get to the 2 pile of rocks marking the checkpoint. You see a pile of rocks, odds are it marking one end of a checkpoint, don't cheat the rocks or red circle will come on permanently until you go back or reset to pick that checkpoint up.

Suicide Killer Tire - The most difficult of the 3 Sandpit 1 tracks to survive!

There a few killer tires ( 6 ) falling from the sky that want to wreck your car. There a couple of gas bottle rockets that will fire from the sky. There exploding straw bales to move the killer tires around, don't get to close!

Can you make it through the 2 way traffic barn bridge or have go around? Got to get to the valley end and make it up the valley wall so you can swing around, to jump your car back into the valley ( wheee ) to get your lap to count.

Hope I did not scare anybody off from racing this challenging track!!

There is a shortcut, but it tight.

4th track - checkout the surprise suicide track I got permission to add to my Suicide track pack. Thanks ****. :)


Let me know how the BugBeer taste. ;) Hopefully the beer will make you survive longer!! Definitely need a tough car for suicide racing, like Dr. Destructo 57 Chevy. My favorite suicide car. :)


Will find a few Daystar weather maps, too. Use the Southern map for Suicide BugBeer run to see the loop signs better.


A BIG thank you to the community for helping me out with the mod!!!! :D

Zebulon55 - For all the art work. :)
The Very End - For the timers for gas bottle rockets and straw bales and other stuff. :)
Mazay - For the ai route visualizer tool, a big help doing the checkpoints. :)
Daystar - For the custom weather maps. :)
Bugbear - For the in-game track tool that made doing AI routes a lot easier and the Stuntfest track editor I tweak to load a Wreckfest Sandpit 1 track map so I could place objects on BugBeer Run and Killer Tire tracks ( Suicide Sandpit1 I did all by hand ). :D
MarcellusW - For the Bugbeer bottles! :)

How would I go about making a glass object break/shatter?
http://community.bugbeargames.com/threads/how-would-i-go-about-making-a-glass-object-break-shatter.11499/
< >
34 Comments

Exploding straw bales are back. :)

* Had to remove my exploding straw bales. They crash Wreckfest with current Build. :(

* The 2 Sandpit 1 tracks, with guardrails were ghosting, So had to load new collision files to get them solid again.

Purple44  [author] Sep 7, 2019 @ 10:40pm
Hi, thx for posting, have not tested Suicide Track Pack - Redone with the new update yet, been waiting for the hotfixing to get done. Maybe in 2 weeks, start testing. Wish me luck.

Mantha Sep 7, 2019 @ 8:06pm
This mod no longer seems to work, even with Old Wreckfest Textures. It's a shame because these are some great tracks.

* Added new suicide menu icons Zeb made me. Thanks Zeb. :)