Store Page
Transport Fever>  Workshop > Stepke's Workshop
This item has been removed from the community because it violates Steam Community & Content Guidelines. It is only visible to you. If you believe your item has been removed by mistake, please contact Steam Support.
This item is incompatible with Transport Fever. Please see the instructions page for reasons why this item might not work within Transport Fever.
Current visibility: Hidden
This item will only be visible to you, admins, and anyone marked as a creator.
Current visibility: Friends-only
This item will only be visible in searches to you, your friends, and admins. 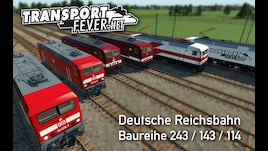 This item has been added to your Subscriptions. Some games will require you to relaunch them before the item will be downloaded.
In 1 collection by Stepke
Deutsche Reichsbahn

The 143 series, the workhorse of Deutsche Bahn. Built from 1984 on behalf of the Deutsche Reichsbahn to be able to use these in the passenger transport and the middle goods service. Originally a top speed of 140 km / h was planned, but this was not implemented in the serial series in favor of a higher tractive force and the maximum speed was on most DR routes only at 120 km / h. After the reunion, the locomotive was also used in the s-bahn service and later also in front of regional trains. It still forms the backbone of German regional rail transport.

the Transport Fever model
The vehicle was originally created and published by me for Train Fever. I have adapted this model for transport fever with all the new features.

You are fans of my work and would like to buy a beer or a cup of coffee? No problem! I am happy about every donation: