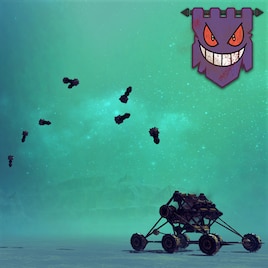 This item has been added to your Subscriptions. Some games will require you to relaunch them before the item will be downloaded.
In 1 collection by Brooka
Brooka's Bomb Lauchers

The CBT or centrifugal bomb thrower is an 8 shot bomb thrower. This rapid fire bomb thrower is simple but effective, it isn't the most practical launcher, but is very fun to use.
It was inspired by Besiegecreature's machine, avaliable here. This version however is mobile and able to fit inside the bounding box.

Many thanks to Draegast for showing off this machine.

Controls:
Arrow keys for movement
L Shift: Toggle flywheel, let it get up to speed before firing, its safer to deactivate for transit.
Press 1 key: Retracts cutting blade which will cut the ropes holding the bombs in place on the right side of the drum. Hold to release multiple bombs, quick taps should release 1 or 2 bombs
Press 2 key: Releases bombs from left side.
F key: Change views, (the red dot denotes where the bombs will hit when the dot is directed at the ground, the birds-eye view shows where the bombs will hit on the ground from an above view.)

Tip: Releasing all the bombs at once can result in an air detonation, it is usually better to fire in bursts. It is not advised to fire on the move, or travel with the flywheel engaged.

This machine is 100% vanilla, no mods or bsg editing used, if you enjoyed this check out some other bits in my workshop and don't forget to leave a rating. Thanks for viewing!!

If you liked this, try this: Collection
< >
22 Comments